Tainan garbage trucks are now back into teaching English to the local Taiwanese. After suspending the program last year, someone in Tainan City decided that Tainan can’t do without those valuable English lessons.

I was shocked as to the English lesson of last week :

If you listen to it, you’ll probably be able to make out :

Which is the last thing I would think appropriate for when I’m disposing my garbage. 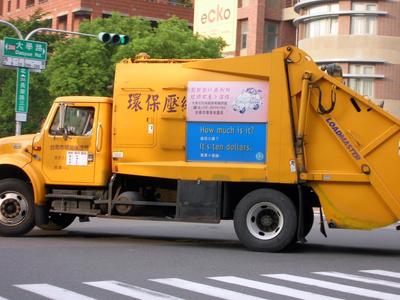 A Taiwanese city has come up with a novel way of teaching its citizens to speak better English.  The rubbish trucks in Tainan used to announce their arrival in every street by playing music from Beethoven over their loudspeakers.

But from Sunday, the mayor is getting them to blare out the message "Let’s talk in English."  Three hundred separate sentences have been recorded for the trucks to play. Most are conversational phrases like "How are you? I am fine thank you," some less common, like "How much does a pound of cabbage cost?".

The mayor hopes that after a few months of putting out the rubbish even Tainan’s grandmothers and grandfathers will have a basic grasp of English.

It was, he says, his wife who came up with the idea. But he is hopeful it is Tainan’s first step towards becoming an international city.

I actually don’t mind the Taiwanese garbage collection system that forces you to wait for the garbage truck and dump it yourself. But, I’ve always had trouble with the annoying 2 hours (in Tainan, usually between 6pm and 8pm) that the garbage truck goes around town and creates insane noise and air pollution. That week, it was the worst – two hours every day of "Are you hungry? no, I’m not". Anyone would go mad.

Did Tainan really suspend it in 2008? It did, according to The China Post :

An “English teaching service” — messages broadcast by garbage trucks in southern Taiwan’s Tainan City for the past few years and once a hot news item covered by foreign media — has been suspended now for more than six months, city officials said yesterday in response to queries from curious residents.

With that said, this short video shows a few nice things about Taiwanese garbage disposal. Taiwanese recycle. Probably more so than most countries in the world, with some areas having to separate the garbage into 6-8 different types of garbage. My only difficulty with this lies in the fact that those garbage bins usually only have Chinese signage, making it extremely difficult for tourists and expats to recycle the right way.

More on garbage trucks in Taiwan :

In the university (NCKU) zone garbage trucks do not have any english speaking abilities. (like most of the people here). they just play a music.

Nitzan – as you can clearly see in the garbage truck photo, the photo was taken from the Starbucks next to the university looking at Chimei cafe (sign saying "daxue rd." in Taiwanese Pinyin). Those trucks are all over Tainan. If you haven't noticed them so far, I say – lucky!

Ah, that's so funny. That's almost worth a trip to Tainan just to hear it in real life.

I never minded learning Chinese here and there as necessary, but those trucks only come while I’m at work! Having to be at home to meet the truck has always been a big enough of an issue that I’ve chosen to live in places with a 管理員 (building custodian/manager guy) to deal with it for me.

Having the trucks teach English is an interesting idea, but does it have to be about food? A trash truck asking people if they’re hungry is messed up.