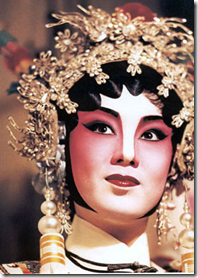 Till HK, my encounters with Chinese opera amounted to a short opera class in China Town Singapore …

To sum up my Chinese experience at Singapore I went on my final night for some classic Chinese dinner and opera with the Chinese Theater Circle (http://ctcopera.com.sg) and was surprised to be part of an exclusive 8 people to have a private show and discussion. Chinese Opera, that tend to sound like squeaky voices with lots of banging, gets a lot more interesting when there’s an English lecture about the legends and traditions before the show and some English subtitles while it’s playing. Fascinating.

and a visit to Taipei Eye in Taiwan …

There were times I found Chinese opera sounds unbearable, waking up in the middle of the night in western Tainan as the nearby temple was hammering through, but I can now honestly say that I can appreciate the different sense of harmony and can now really enjoy its beauty.

It is an acquired taste, but I somehow grew fond of it, even occasionally taking the time to watch it on TV while trying to figure out what it’s about. Some of them, regardless of whether you get the Chinese or not, are pretty straightforward to follow.

Coming to HK, I was faced with a a whole new level of cultural challenges of the local Chinese opera. While the opera in Singapore and Taiwan is mainly Mandarin based (Tainan temples sometimes hosting performances in Taiwanese), the HK ones naturally use Cantonese. Briefly, I’d comment that I find Cantonese to be much more difficult to listen to than the beautiful sounding Mandarin, so together with the Chinese Opera singing style, it was quite horrible at the beginning.

HKUST, like many other places around HK, runs the occasional Cantonese Opera on campus. This is what it looks like (those and more available on the HKUST video channel sites):

Although I don’t understand any of the Chinese, and find it quite difficult to listen to, I do think it is fascinating. The clothing, the make-up, the way they move, the facial gestures, the apparent humor and style.

Here’s a bit about the history (from "Cantonese Opera"):

Cantonese Opera (also known as "Guangdong Drama") is the main drama class in the Guangdong area. It originated from the Jiajing ( 嘉靖 ) period of the Ming Dynasty ( 明朝 ). There were performances in the Ming and the Qing Dynasty ( 明、清朝 ). At the beginning, the singing language used was the official one of opera bamboo-sheds (戲棚官話). Gradually it was sung in Cantonese . Cantonese Opera was prevalent in Guangxi ( 廣西 ), Hong Kong and Macau. Cantonese Opera has included other Chinese drama like Yick Yeung Pitch ( 弋陽腔 ) and Kwan Pitch ( 崑腔 ) etc.

At the end of Qing Dynasty, the Guangzhau ( 廣州 ) dialect was used in Cantonese Opera because the cultured people wanted to make use of Cantonese Opera as propaganda for voicing revolution . In order to make Guangzhau people understand more easily, lots of Cantonese was used. In the early stage, performances were mostly arranged in the opera bamboo-sheds where God statues and altars ( 神壇 ) were placed for worship. Hong Kong opera bamboo-sheds mostly have Ritual Performances ( 神功戲 ) to celebrate birthdays of deities ( 神 ) and Buddha. These performances allow devotees to worship and thank them.