Our explorations of the Balkan religions somehow always seemed to revolve around the topic of the exotic Bektashim religion and finally brought us to a tiny hidden gem in the outskirts of Alabnia, a town called Berat (or Berati). Generally speaking, Bektashism is a mysticism oriented Muslim Sufi order which was quite influential during the Ottman empire till a certain incident, making this form of Islam somewhat dominant in most parts of the Muslim Balkans. The temples of Bektashism worship are called Teke(s). But we’ll get to that later. Before going into the religious side of Berati and how this relates to Judaism, it’s important to consider Berati for what it is -  a beautiful little town, called “White City” by some (wait, didn’t I just refer to Jerusalem and Tel Aviv as white cities?).

Looking at this night photo, you might be able to realize why. Yep, it’s white alright. 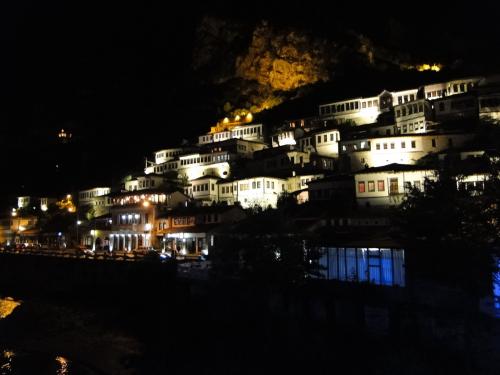 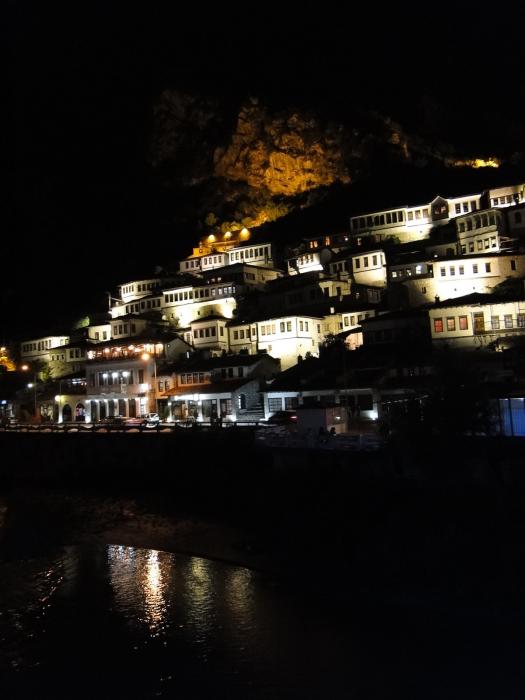 There’s not much happening in that little town after dark, but the way they illuminate the older side of the town makes for a nice view.

It’s also nice to stroll around the narrow alleys and rumors insist that locals are very warm and hospitable if you wonder through their neighborhood, though I haven’t had the opportunity to see that in action. 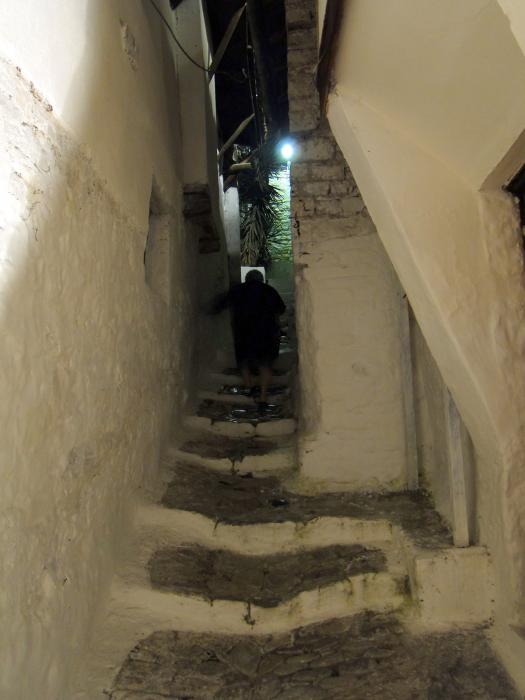 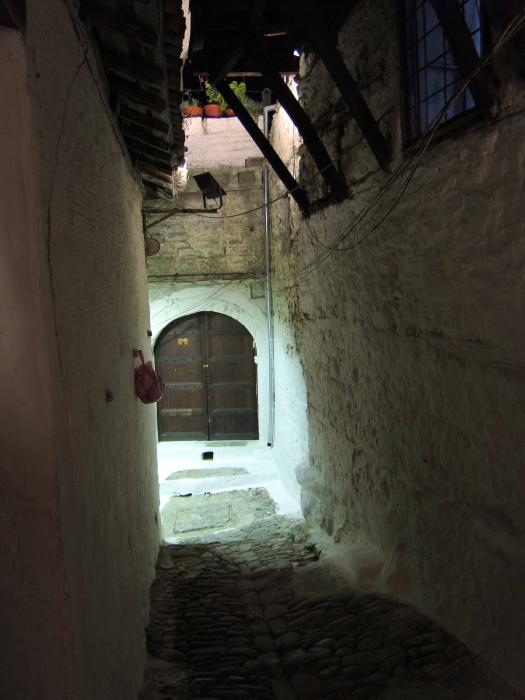 If you’re into religions and politics, and you know I am, you might be interested in how the Bakatshi story unfolded. Wikipedia has the details:

That Wikipedia entry has much more about the inner beliefs of the Bektashi religion. Following is my edited version of that explanation :

Bektashism is a Sufi order and shares much in common with other Islamic mystical movements, such as the need for an experienced spiritual guide—called a baba in Bektashi parlance—as well as the doctrine of the four gates that must be traversed: the Shari’ah (religious law), Tariqah (the spiritual path), Ma’rifah (true knowledge), Haqiqah (reality). Bektashism places much emphasis on the concept of "Unity of Being". Bektashi do not consider this a form of trinity. Bektashis base their practices and rituals on their non-orthodox and mystical interpretation and understanding of the Qur’an and the Prophetic practice (Sunnah). They have no written doctrine specific to them, thus rules and rituals may differ depending on under whose influence one has been taught. Bektashis generally revere Sufi mystics outside of their own order, such as Al-Ghazali and Jelalludin Rumi who are close in spirit to them.

Bektashis hold that the Qur’an has two levels of meaning: an outer (zahir ظاهر) and an inner (batin باطن). They hold the latter to be superior and eternal and this is reflected in their understanding of both the universe and humanity (This view can also be found in Ismaili Islam—see Batiniyya). Bektashism is also initiatic and members must traverse various levels or ranks as they progress along the spiritual path to the Reality.

If you’ve followed this blog , you’d probably recall this isn’t the first mention of this order. The following posts have made references to the Baktashi on several different locations (Balkans and Istanbul):

Now, the interesting part of this whole story and how this might relate to an Israeli visiting Albania lies in the Tekke of the Helveti. Wikipedia makes the connection (bold not in original text):

The Tekke of the Helveti (Teqe e Helvetive), of 1790, with a porch and a carved and gilded ceiling. Near of tekke is purported to be the grave of Shabbatai Zevi, a Turkish Jew who had been banished to Dulcigno (present day Ulcinj) who created controversy among his followers upon his conversion to Islam.

Very briefly, Shabbatai Tzvi (Zevi) was the concept behind the whole tour to the Balkans, as it’s a very important and colorful person in the Jewish history of that region. More from Wikipedia:

Sabbatai Zevi, (Hebrew: שַׁבְּתַי צְבִי, Shabbetai Tzvi, other spellings include Sabbatai Ẓevi, Shabbetai Ẓevi, Sabbatai Sevi, and Sabetay Sevi in Turkish), (August 1, 1626 – c. September 17, 1676 in Dulcigno (present day Ulcinj), Montenegro) was a rabbi and kabbalist who claimed to be the long-awaited Jewish Messiah. He was the founder of the Jewish Sabbatean movement. At the age of forty, he was forced by the Ottoman Sultan Mehmed IV to convert to Islam. Some of his followers also converted to Islam, about 300 families who were known as the Dönmeh (aka Dönme) (converts)

Yep. He declared himself (with/through Nathan of Gaza) as the Jewish Messiah, and for a certain period of time the Jewish people were split around the issue of whether he’s a true or false Messiah. The fact that at the end he decided to convert to Islam led to a huge disappointment and self-criticism among Jews of that time, but there were quite a few followers who converted to Islam with him while secretly maintaining many Jewish Kabbalistic customs.

Another unknown source summarizes the ordeal :

The Tekke of the Helveti (Teqe e Helvetive), of 1790, with a handsome porch and a carved and gilded ceiling. Near of tekke was the grave of Shabbatai Zvi, a Turkish jew living in Berat who in the 1660 declared himself to be the Messiah and began a movement that led to hundreds of thousands of impoverished European Jews trying to follow him in an attempted emigration to the Holy Land. The Ottoman authorities put him on trial for disrupting the Imperial Peace and imprisoned for a time in Costantinopole. He was forced to conver to Islam and exiled him back to Albania . After his death his tomb was taken over as a Bektashi shrine and remained that until 1967

Isn’t that a fascinating story?

So, like any Messiah, it’s a big difficult to trace where exactly he was buried. During our visit to the Balkans we visited three different sites, all claiming to be the place where Shabbatai is buried. The building next to the Tekke of the Helveti in Berat was one of those.

Even without that Shabbatai story, the Seattle Times writes about the place :

One of the most interesting religions is Bektashism, a liberal Muslim sect whose members worship in elegant temples called tekes. The teke in Berati is especially worth visiting. 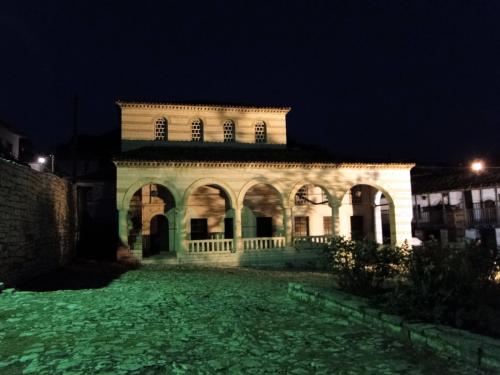 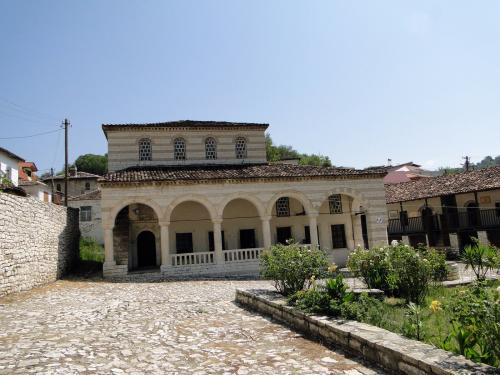 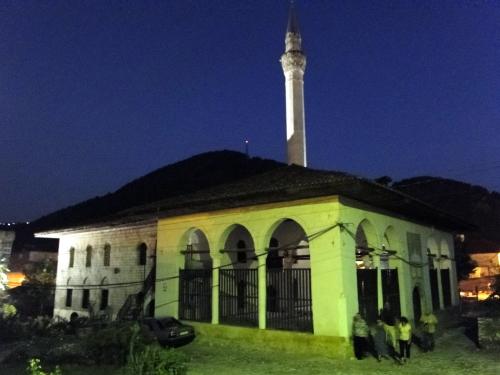 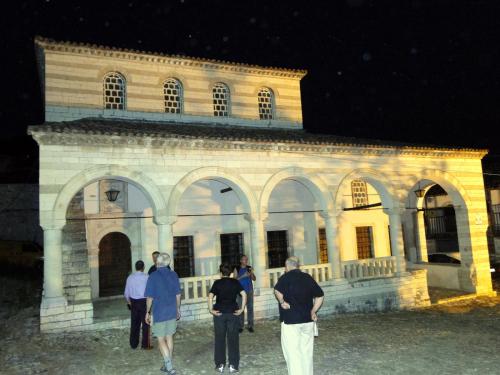 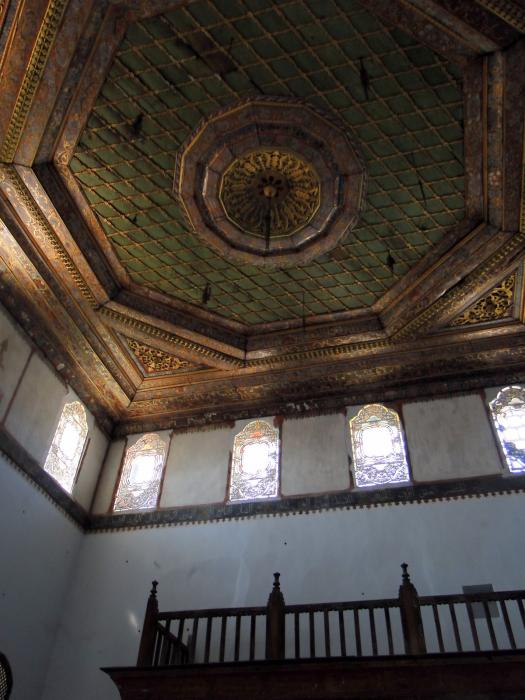 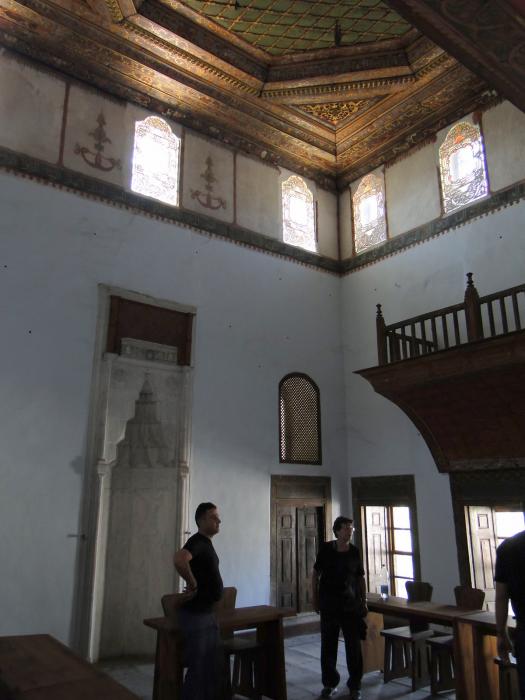 The highlight of it all is our Israeli tourguide – Zeev Ben Arie (1, 2)- explaining about the place while demonstrating the Bektashi whirling Dervish dance.

Liked the story? more about the magic of Berati to follow.

like it, some related storied are mentioned in the book
“Salonica, City of Ghosts” , a must read book.

my husband and i were there last year, (6 month cycling adventure) and I am trying to determine why there was a Magen David sculpted into the lintel area above the main door to the Sultan’s mosque next to the Helveti. The mosque is one of the oldest in Albania, dating to 14th century, and I wonder if it was once a synagogue – or used in conjunction with Jewish worshipers or if it has something to do with the story of Sabbatai Tsvi. Did you happen to notice the Magen David that was there? (it’s quite prominent when you… Read more »