Inside the walls of the Berat Castle, within the area of Saint Maria’s Sleep Church, is the Onufri Museum – named after one of Albania’s finest artists. We had the pleasure of attending a tour of the place given by an attractive local tour-guide who took us through the church and the museum. She explained about the historical context behind the life and work of the Albanian artist and the city of Berat. It’s quite fascinating, really. 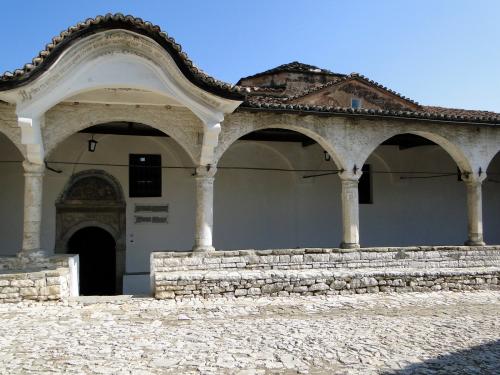 From 27 february 1986 Onufri National Museum is located in the inner part of “Saint Mary Church” in Castle of Berat. The Museum is called “Onufri”, in honor to the Albanian painting Headmaster of XVI Century.

The Church is rebuilt during the 1797, where the Cathedral of City was placed. The Cathedral is the most representative monument of post Byzantine architecture in Berat town.

The museum collection is constituted with 173 objects chosen from a found of 1500 objects, belonging to the found of Albanian Churches and Monasteries as well as to Berat, where you can find 106 Icons and 67 Liturgical objects, created from Albanians Iconographical Painters during XVI – XX th Centuries: Onufri, Onufri `s son, Nicola, Cypriot Onufri, David Selenica, Kostandin Shpataraku and Cetirs (Gjergj, Nicola, Johan, Naum, Gjergj junior) and a lot of anonymous painters.

Icon holder of Berat Cathedral is inscribed by master Naum from Lavdar, Opar and Master Stefan Barka from Misras, Opar in the middle of XIX th Century.

A very helpful TripAdvisor member gives a very comprehensive description of the Onufri and the museum :

Only few facts are known about Onufri’s life. Until 1547, he painted in Berat, 1547 in Berat and Kostur (Kastoria, Gr), 1555 in Shelcan near Elbasan, after 1554 in the village of Valsh. At that time he signed his works of art with the title “protopapa“, which proves that Onufri hold a high rank in Byzantian ecclesiastic hierarchy. The first inscription recording Onufri’s name was found in 1951, in the Shelqan church. The Kostur church has a date 23 July 1547 and a reference to Onufri’s origin: I am Onufri, and I come from the splendid town of Berat . Onufri’s style in painting was inherited by his son, Nikolla, though not so successful as his father as well as by Onufri Kiprioti and Konstandin Shpataraku.At Onufri’s time, Byzantine sacral painting followed the relatively strict Paleolog Renaissance. Whereas he painted biblical and ecclesiastic motives according to the Byzantian canon, in his style Onufri freed himself from its all too strict patterns. He painted Albanian landscapes, Albanian towns and Albanian folk, peasants, shepherds and especially knights. Saint George, for example, seems one of the knights who fought the Turks under Skënderbeg. By his rather realistic style, he approaches European Renaissance. He was a master of portraits, capturing the inner life of his protagonists. He did not follow the rules of negative perspective, according to which far away objects seem bigger than those in the first plane. In Onufri’s works of art we find the beginning of landscape painting.Perhaps the most characteristic feature of Onufri’s pictures – not only icons, but also frescoes – is the so-called Onufrian red. This typically bright color was also predominant in mediaeval Albanian costumes. Today the art of producing that Onufrian red is lost – a secret which Onufri has taken with him into the mystical world he once had painted a glimpse of.

Onufri’s Icon Museum was opened in Berat in 1986. It contains some of the finest examples of religious art in Albania, not only by Onufri himself, but also by his son, Nikolla and other painters’. In the Room 1: facing the entrance, displays one of the most beautiful icons in the museum, a work by Onufri in which the Virgin Mary is shown holding the infant Jesus on her right arm, enclosed by metalwork beautifully decorated with geometric and natural motifs. The style developed in Albania at this time was closely related to the icon painting school developed in Byzantine art in the time of Emperor John Paleologus, and the work of the Albanian painters drew on , and developed, a tradition already 200 years old. An icon representing Tyron and Stratiliate is exhibited at the entrance to the naos. The two warrior saints are shown dressed as soldiers and kneeling in prayer. The room also contains objects made for liturgical use and ornate Bible covers made by the Berat master Agathangjel Mbrica. a particularly fine example shows the life of the Prophet Isaiah. In the Room 2: is a large space with many icons exhibited in it. On the left is an icon ‘Candlemas’ from the citadel’s Church of the Annunciation. It is a complex, elegant, richly-colored composition. The western side of the room is taken up with several other icons representing the Annunciation. Another outstanding icon in this room is that of the Virgin: made in 17C, it is heavily influenced in style by the contemporary icon painting school on the island of Crete. It has a delicate style, and very fine color gradation. Icons of St Michael and St George of outstanding interest are also found in this room. In the upper Room: Most of the icons in this room, reached by the central wooden staircase, are from the citadel church of St Demetrius. The finest is perhaps the icon of St Nicholas, attributed to Onufri, or the icon of John the Baptist, by the same artist.

Photography inside is forbidden, but a short online search brought up the following images of the insides and paintings : 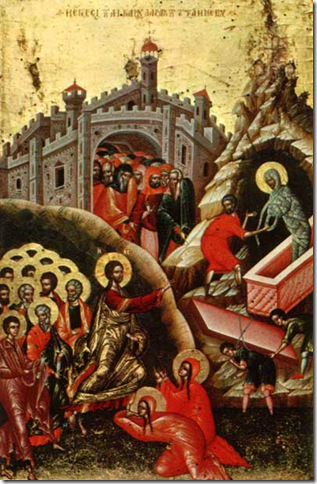 Mary and the Child 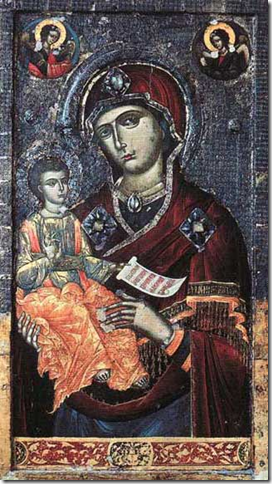 Gothic interior of the Onufri Museum 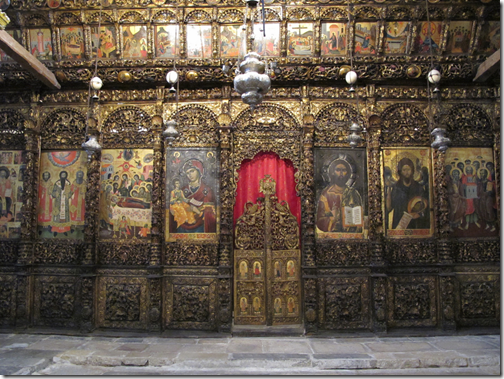 Following are captures of the opening hours and the general description : 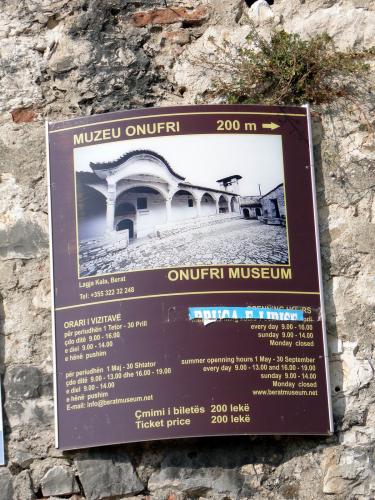 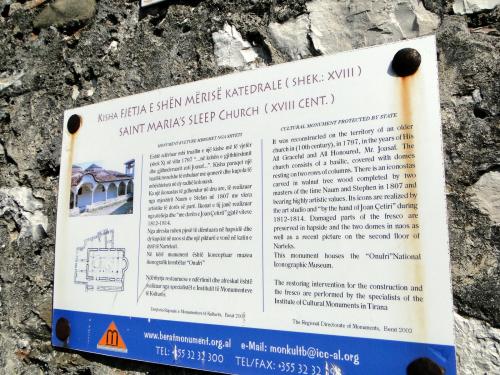 Other links of interest :