Every now and again, I’m surprised with what I find in Shenzhen. In one of my recent visits to Shenzhen, I went to visit the Fairy Lake area and found it be an absolutely gorgeous place and a real nature jewel. One of the many attractions in that area is the Hong Fa Temple [弘法寺], one of the largest Buddhist temples in the region.

Hongfa Temple, located in the Shenzhen Xianhu Botanical Garden, lies in the Wutong Mountains, which is in the east of Shenzhen and known as Shenzhen’s “Green Heart”. It backs on to the abrupt mountains, and faces to Xianhu.

The temple, on the slope of the mountains, has a construction area of more than 30,000 m2. From bottom to top, Vestibule Hall, Heavenly King Hall, Buddhism Cultures Exhibition Hall, Grand Hall, and Hall of Scriptures Collection are spreading out on the invisible central axis. On the sides, there are Monastic Reception, Hall of Patriarch, Qielan Hall, Drum Tower, Mercy Buddha Hall, Ksitigarbha Hall, Gong De Hall, the Abbot’s Residence, Mahaparinirvana Temple, Abstinence Hall, Buddhist Temple, Monks’ cells, Guests Houses, Yunshui Hall and so on. In particular, the Abstinence Hall is one of the biggest abstinence halls in china.

Hongfa Temple’s appearance owes much to the good time of the reform and opening-up. On July 1st, 1985, the temple started to break ground. Different from any other maintained or rebuilt temples which were damaged in the Cultural Revolution, it is a totally new temple. It is also the first temple built after 1949 in china. At that time, the famous dignitary Benhuan Hoshang leaded his disciples personally to expound Buddhist doctrine for the foundation laying ceremony at the bidding of Shenzhen’s department concerned. Though it was at a dead set in building after completing Grand Hall, Hall of Scriptures Collection and Heavenly King Hall, it started up again thanks to the concern of and vigorous promotion by the president Zhao Puchu.

On august 31st, 1990, Hongfa Temple opened up to the public as a venue for religious activities upon approval by Shenzhen Municipal People’s Government. And it has become the Buddhism temple that is most worshipped and effective one in Shenzhen City. 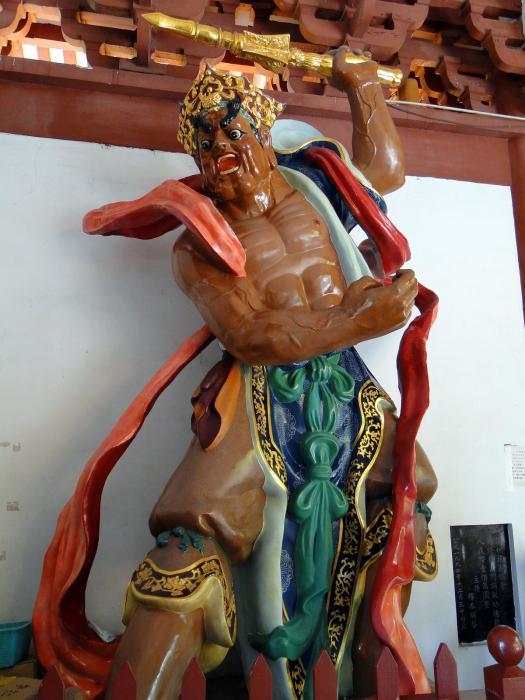 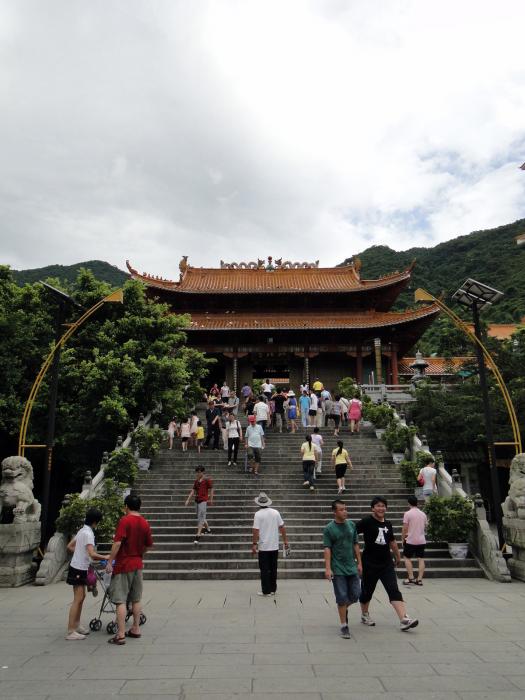 The most interesting thing for me in temples is watching people worship. China doesn’t have a reputation for Buddhist worship, but by the looks of it around the temple, Buddhism is going strong. 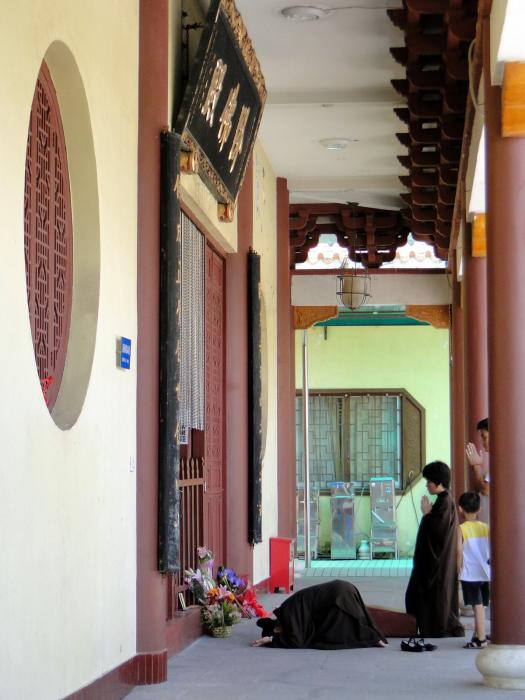 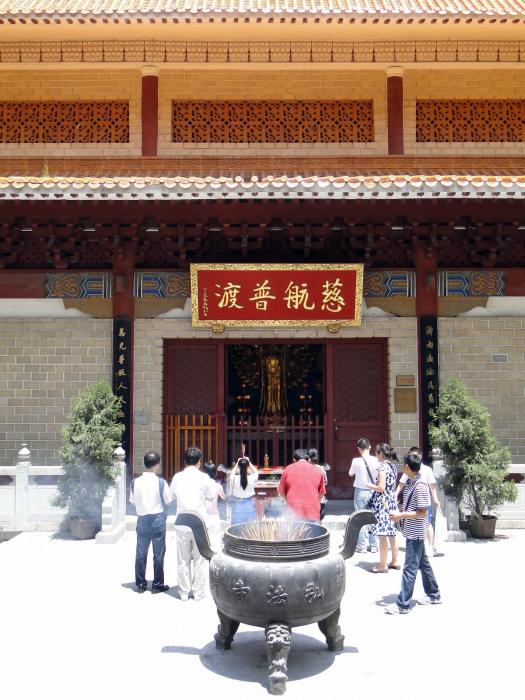 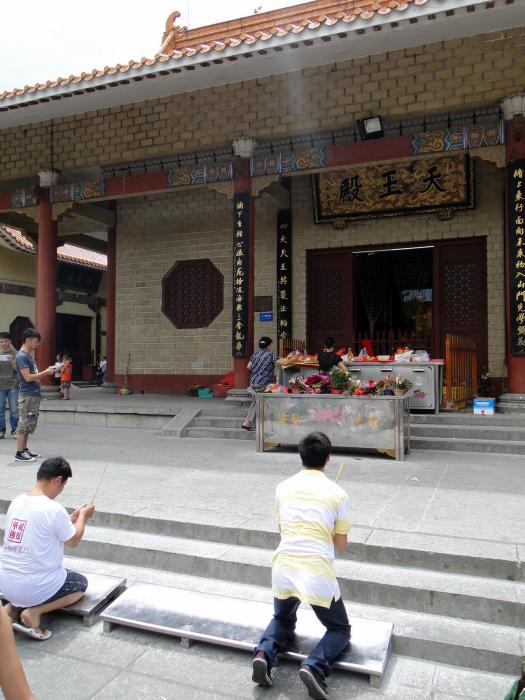 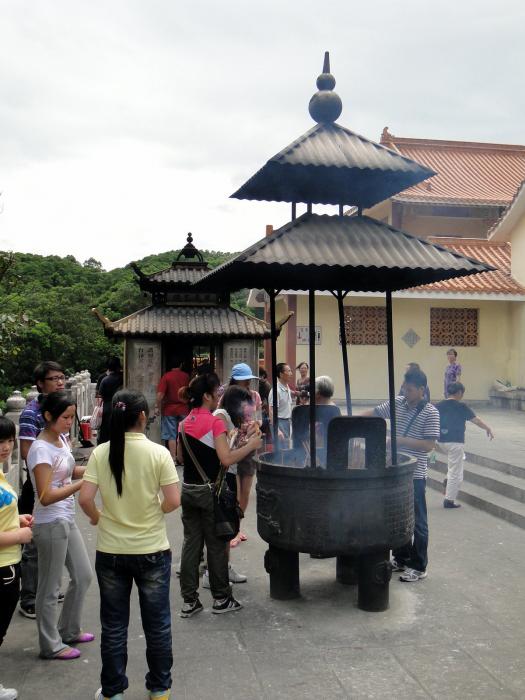 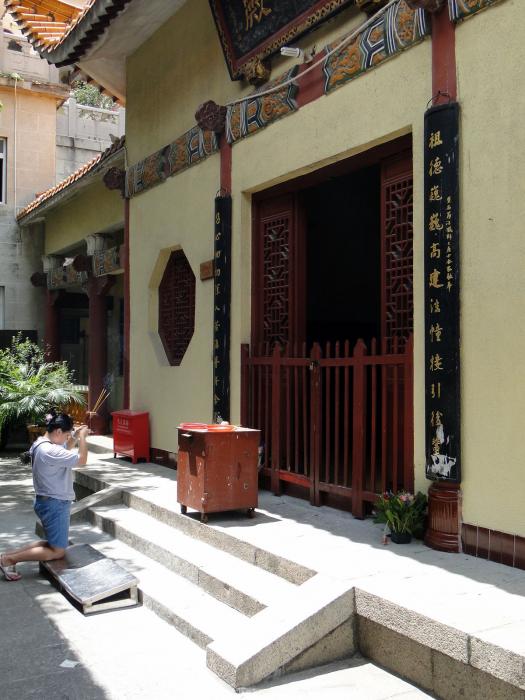 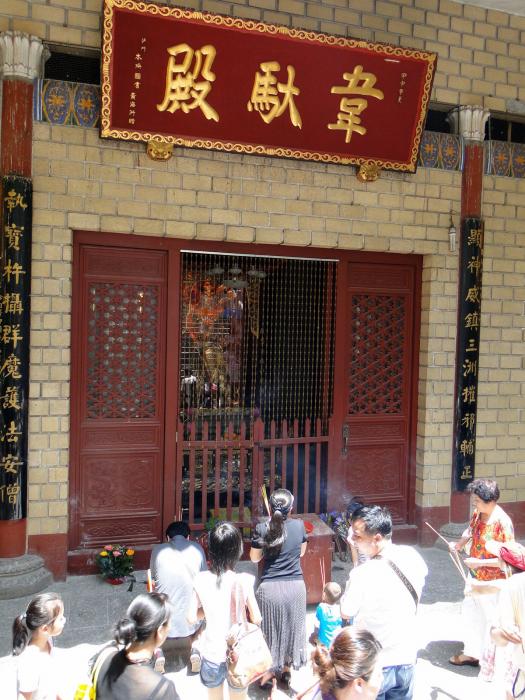 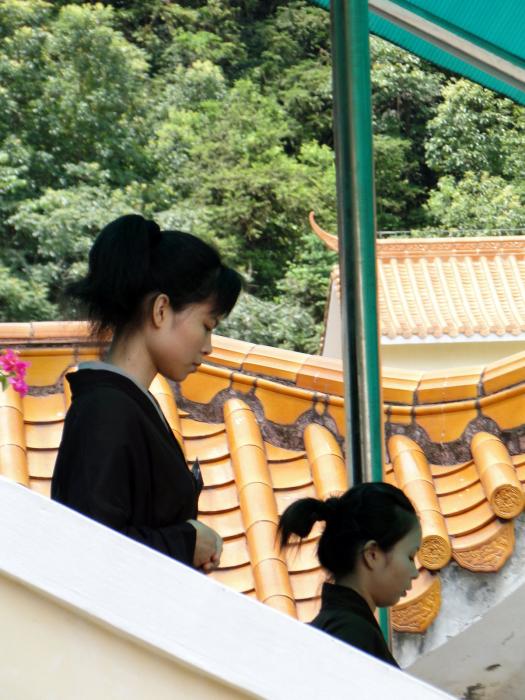 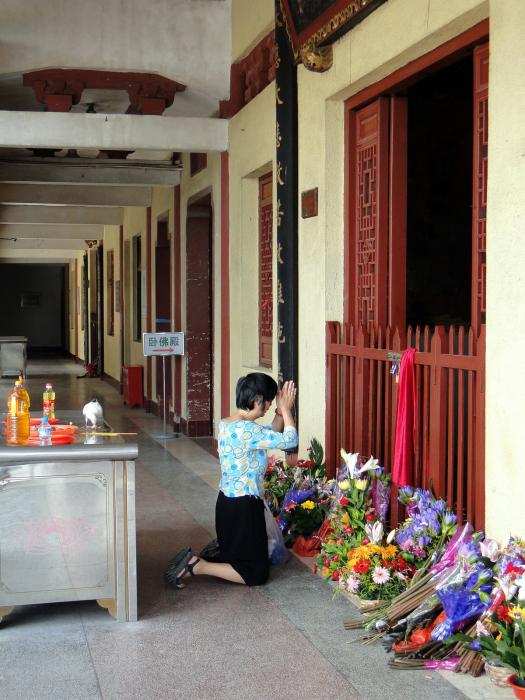 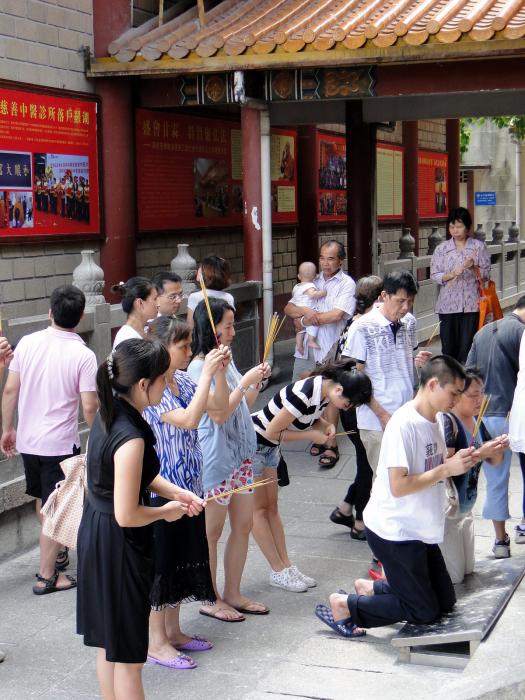 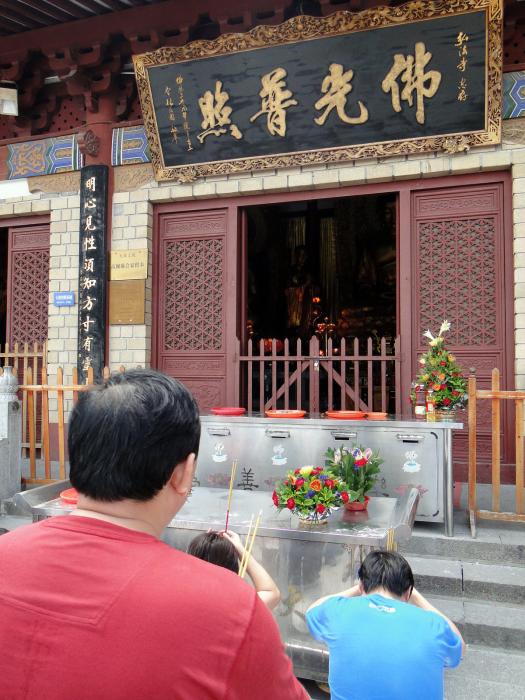 I haven’t seen this a lot in HK/Taiwan, but in these next photos the people were tossing coins so that they would enter from certain parts of a mini-shrine, hoping for prosperity. It’s a cute little game, especially for the younger generations. 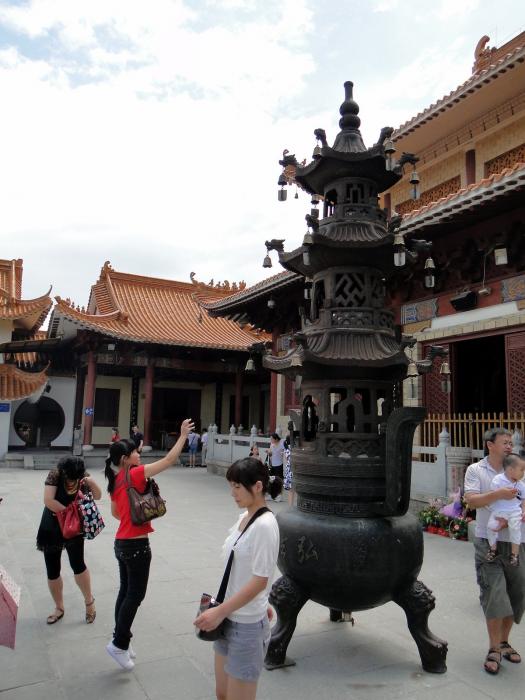 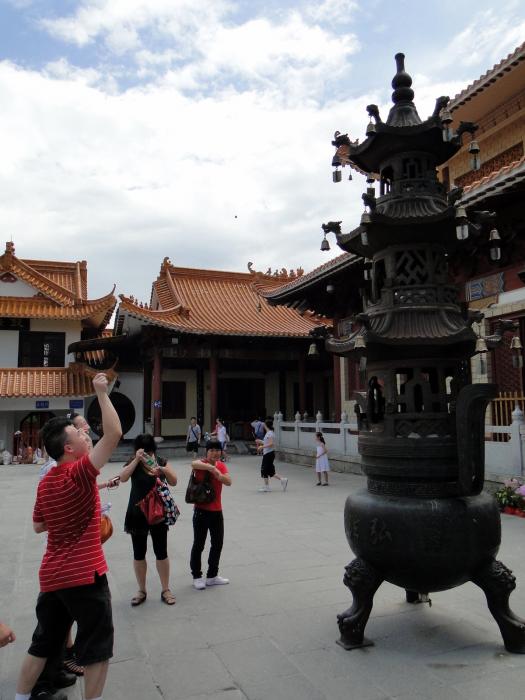 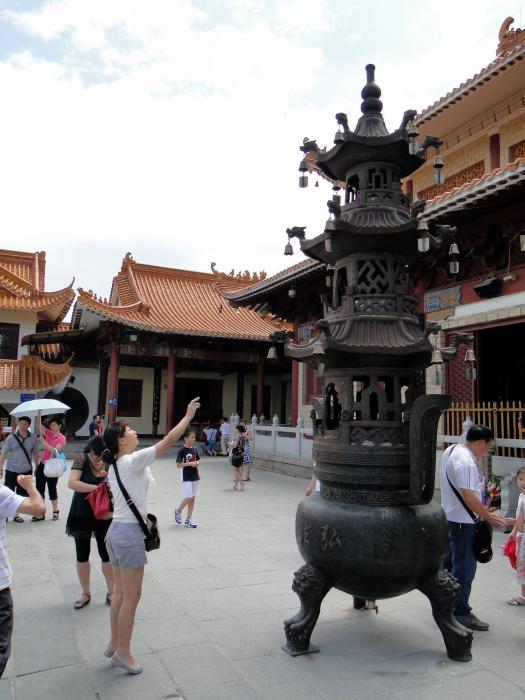 As for the Hong Fa temple, here are some photos for you to get a feel of what it’s like… by the looks of it, there is little doubt that this is a wealthy establishment. 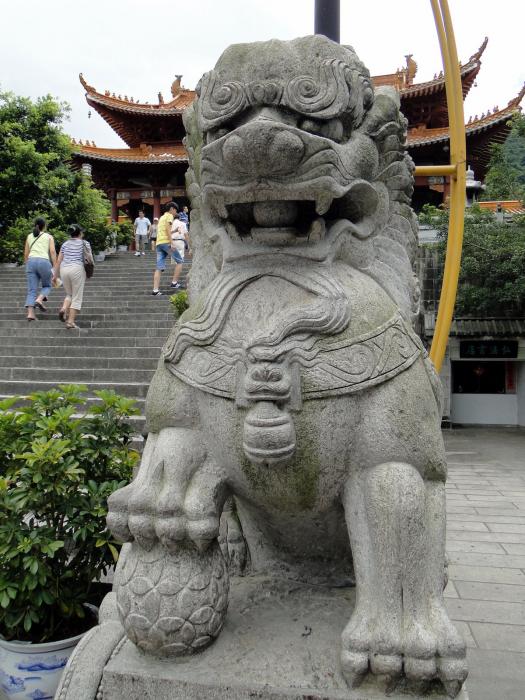 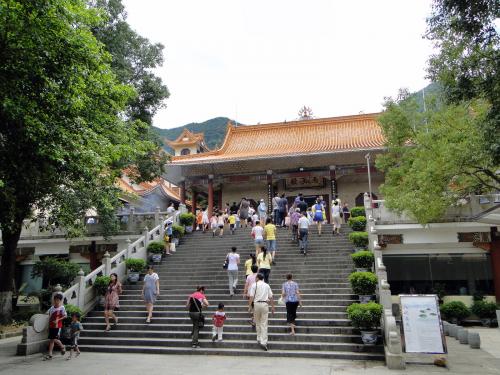 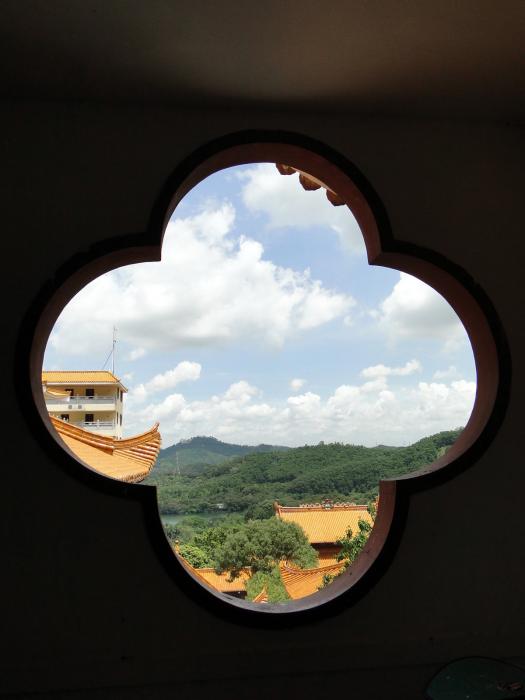 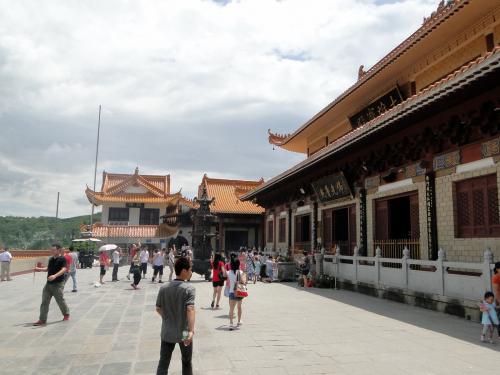 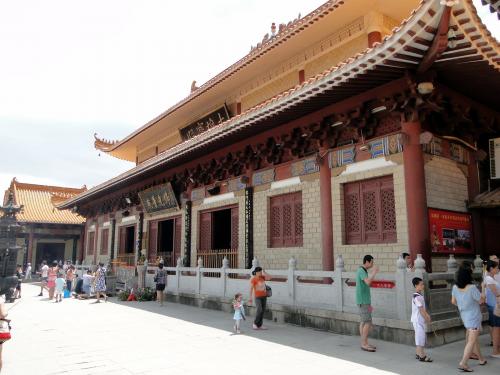 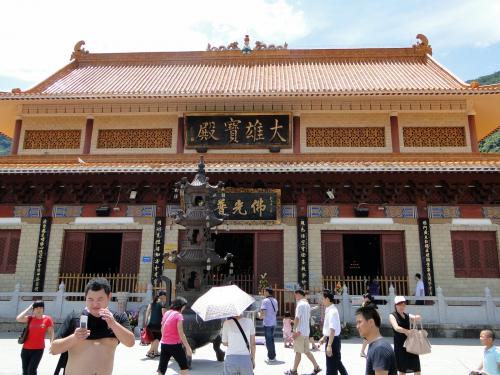 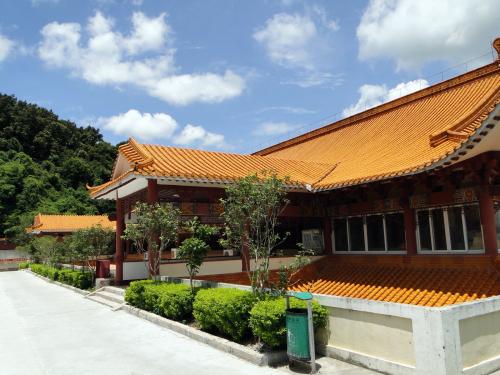 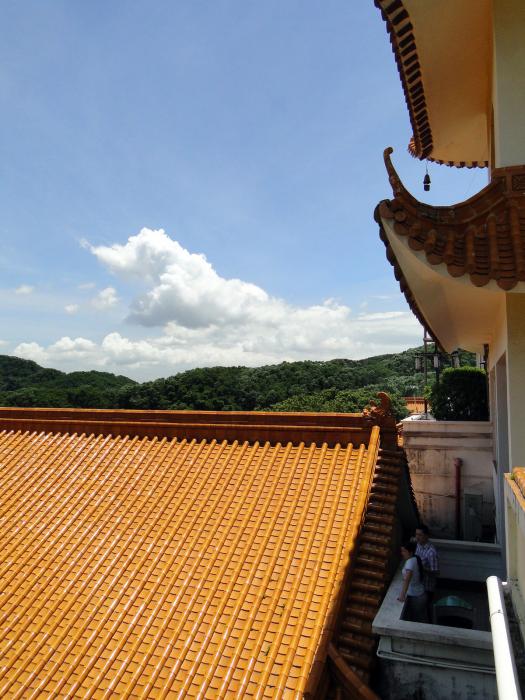 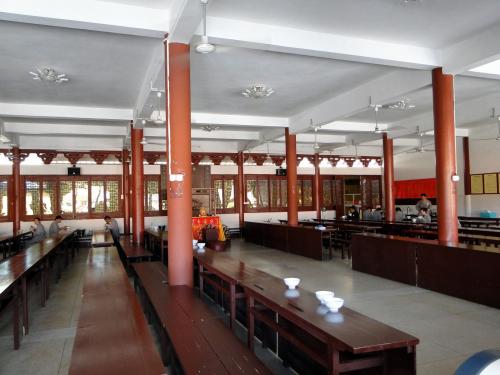 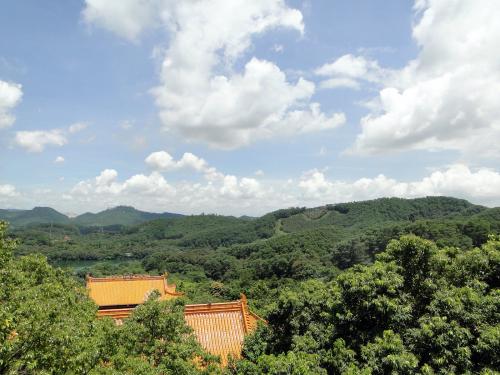 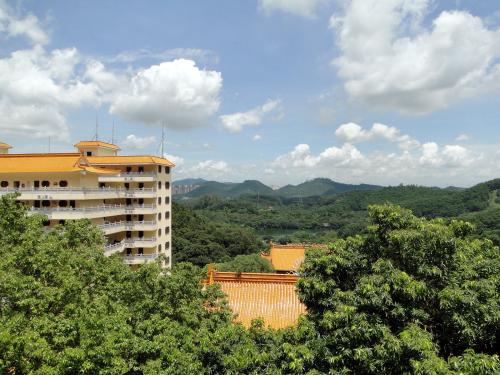 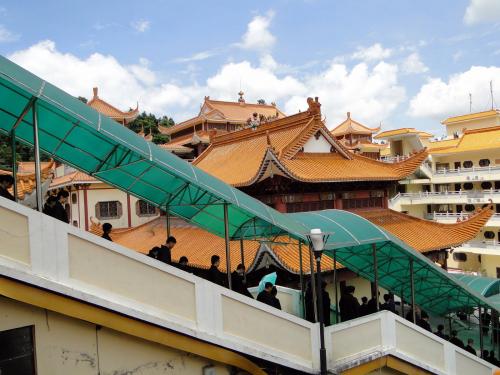 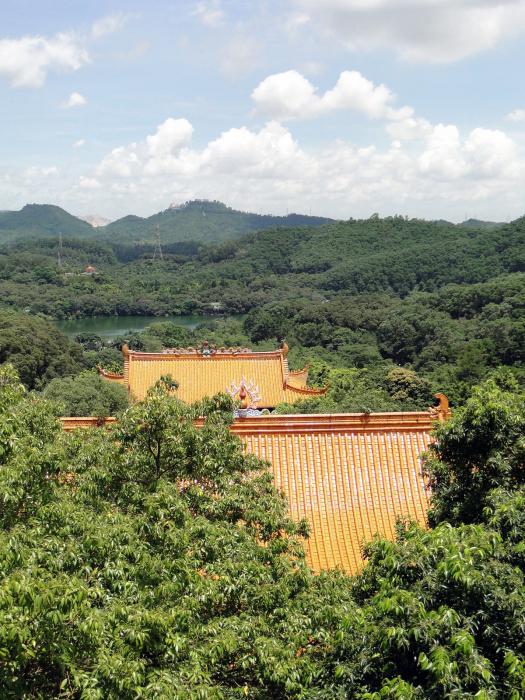 If you’re feeling hungry for some good quality veggy food, the temple has a local veggy restaurant. Happy Cow introduces :

Simple and good vegetarian food, a set menu. Part of a large Buddhist temple complex that open to visitors and busy on weekends. Direction: Mini-bus 468 (from the Hua Qiang Bei area) ends at the gates of Xian Hu (Fairy Lake) Park. From there, buy a ticket and walk inside the gates. Take the shuttle bus to the temple gate. Or by taxi (around 30-40 yuan from Luohu Station area, tell the driver "Xian Hu.". 罗湖区莲塘仙湖植物园弘法寺内. Chinese Name: 泓法寺素食 Chinese Address: 莲塘仙湖植物园里泓法寺

More details on the temple:

Admission to Fairy lake, where the temple is located, is ~20RMB.