Watch this next routine I recorded in a Sichuan cuisine restaurant called Sichuan Folk in a Shenzhen Overseas Chinese District (posh) shopping mall.

Although I’ve previously heard about this act, I found myself staring at this again and again in disbelief. You might notice at mid-video that the performing actor came up to me (the only foreigner in the area) and asked me to touch his face and when I did he changed his face in front of me (knocking off my video camera). There’s no way I can explain how he does this, it’s a complete mystery to me.

Wikipedia has a bit more history: 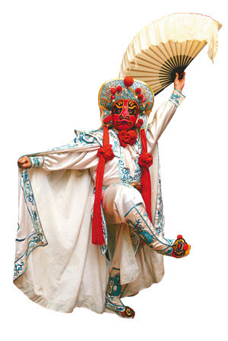 The face changing, or "bian lian" in Chinese, is an important aspect of Chinese Sichuan opera. Performers wave their arms and twist their heads, and their painted masks change again and again and again.

Face changing began 300 years ago, during the reign of the Qing Dynasty Emperor Qianlong (1736-1795). At the beginning opera masters changed the color of their face during performances by blowing into a bowl of red, black or gold powder. The powder would adhere to their oiled skin quickly. In another method, actors would smear their faces with colored paste concealed in the palms of their hands. […]

By the 1920s, opera masters began using layers of masks made of oiled paper or dried pig bladder. Skilled performers could peel off one mask after another in less than a second. Modern-day masters use full-face painted silk masks, which can be worn in layers of as many as twenty-four, and be pulled off one by one.

If you want to see it as part of a Chinese Opera, watch this next video :

Or about the HK actor on SCMP:

Slightly more obvious, yet still entertaining are supplementary acts such as Fire Blowing. 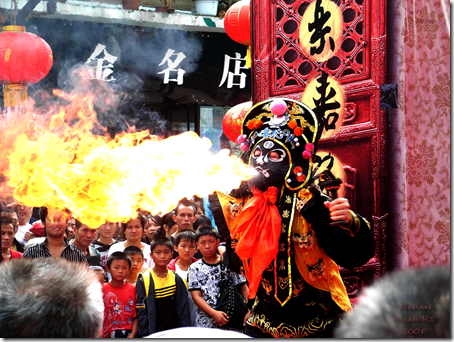 Those Sichuan face changing artists are hard to come by. There’s only one active famous performer in HK and I’ve heard there are only a selected few in Taiwan (on a Taiwanese TV show). If you can find a local artist/show, I strongly recommend going to see that up close and in person to appreciate the wonder.

Khushroo – this is the wrong place to look for those. I suggest you contact some of the face changing gurus directly after one of their performances.

I am a passionate traveller who loves to live with local people and immerse in culture whenever I get the chance. I recently got the chance to watch this dance in KL during CNY and totally loved it. Performed by two women, caught it on my camera up-close, still can’t figure out how they changed masks.

Link to the video: https://www.youtube.com/watch?v=kFZHVK1ZRv4