Although I’ve been to a number of watertowns around Shanghai and Suzhou (see Qibao and Xitang1/Xitang2), I can’t get enough of them, and with Zhou Zhuang you can really see why. Though somewhat touristic and a bit over-commercialized, those watertowns are perhaps the closest thing you can get to what we foreigners would consider the authentic China look. It’s what I hoped China would look like before I were hit with the reality of modern-urban China.

An AAAAA tourist attraction, considered by some as the "Venice of the east", Zhou Zhuang will try and take you back in time to simple old Jiangsu style Chinese architecture buildings, long narrow canals and red lanterns everywhere. Though there’s no doubt a lot of money has been invested in this place, it still has some of the local charm, with local food, crafts, and some interesting local people for you to watch. 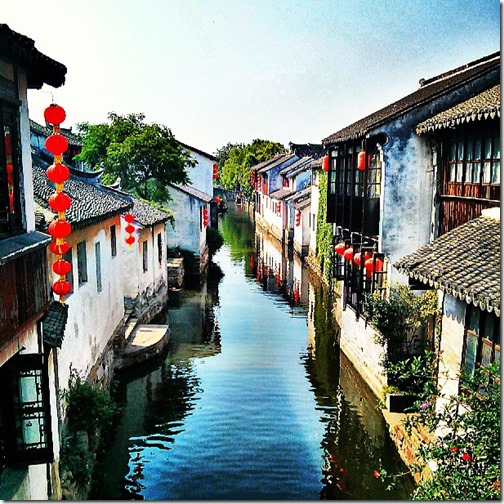 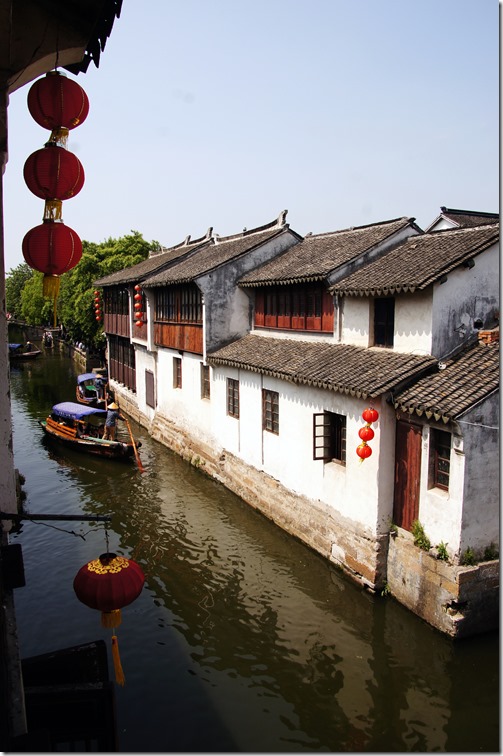 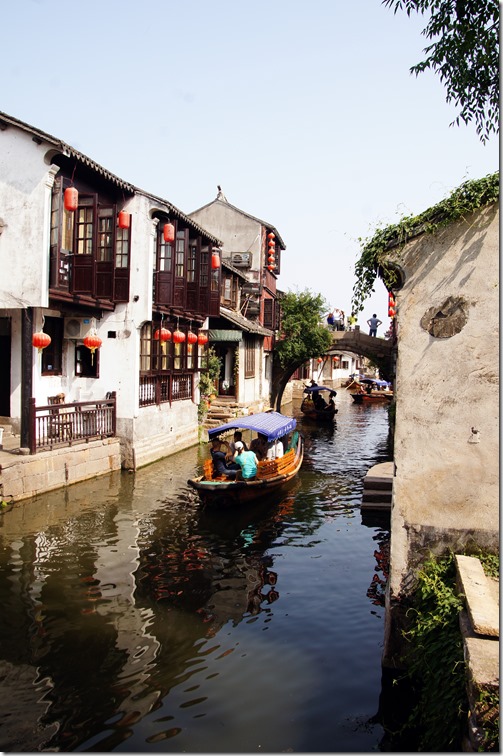 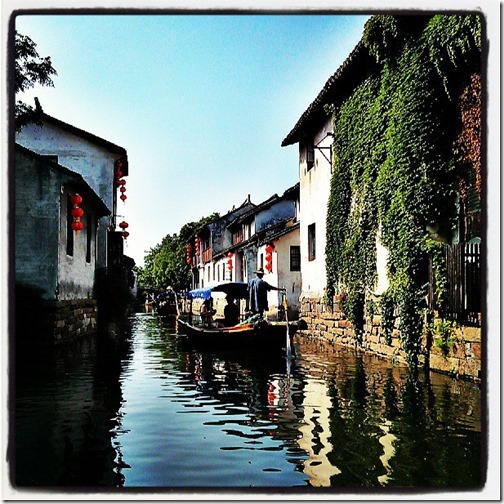 Feel like a bit of background and history? The wonderful Wikitravel has this to offer :

Zhouzhuang, known as Zhenfang Lane in ancient times, is located southeast of the city of Suzhou and to the Southwest of Kunshan. I In the Spring and Autumn Period, Zhouzhuang was a part of the King of Wu and called Yaocheng. It was called Zhouzhuang after ZhouDigong donated more than 200 acres to the local Quanfu Temple during the Yuan Dynasty (1860). By the mid-Yuan Dynasty, Wanshan Shen was using its superior geographical advantage to do trade, hence, Zhouzhuang became a distribution center of food, silk, ceramics, arts and crafts in the south of China. It was officially named Zhouzhuang town on the beginning of Qing Dynasty.

The ancient town, which has a history of more than 900 years, still retains the style and pattern of its ancient village. […]

Zhouzhuang is surrounded and divided by lakes and rivers, 14 stone bridges cross the rivers, showing distinctive views of the water-town. Double Bridge connected by two bridges as a whole. Stone Bridge was built in Ming Dynasty. It is firm and simple, and composed by a stone arch bridge and a beam bridge. The Stone Bridge, likes a lock, tightly connects the north-south River and Silver Band River. The Hall of Shen’s Residence is Qing-style. The overall structure looks very rigorous and the parts of the hall have different scenery. In addition, there are Quanfu Temple (Buddhist) and Chengxu Temple (Taoist) and other religion sites. The whole town connected to the bridges and streets, all houses were built on the river. The boat gently rocking and green shadow whirling on the bank of river.[…]

Lots of old houses and a couple of temples to see, but the biggest attraction – by far – is just walking around and enjoying the atmosphere… 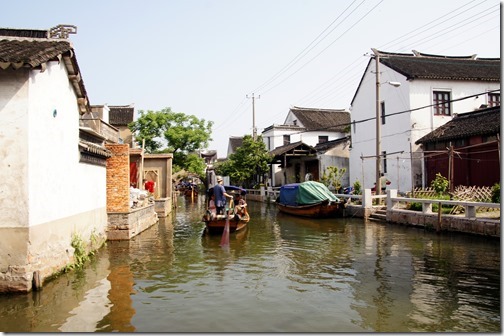 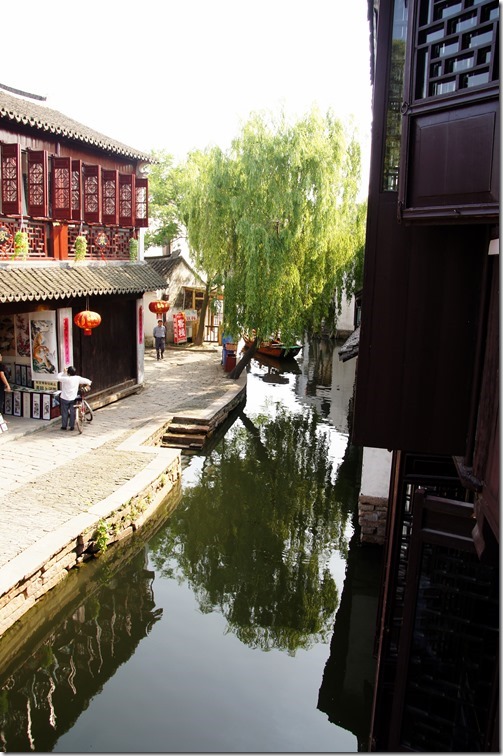 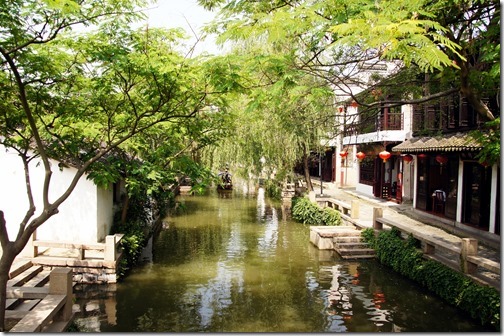 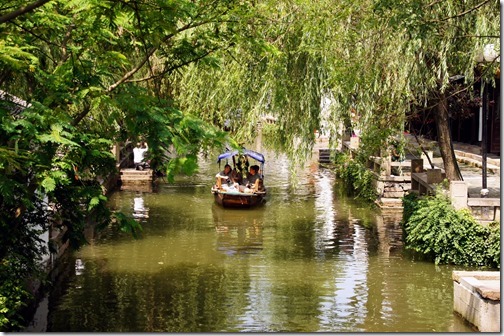 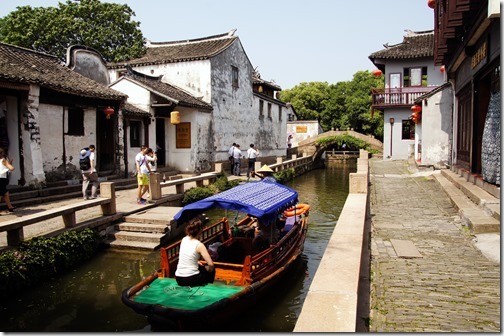 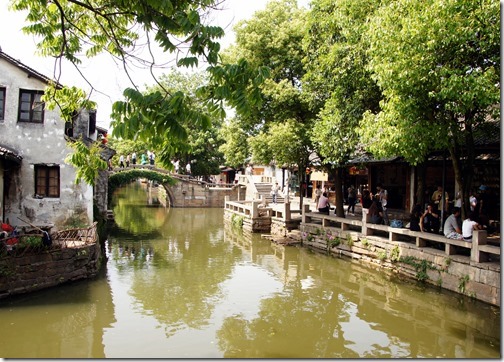 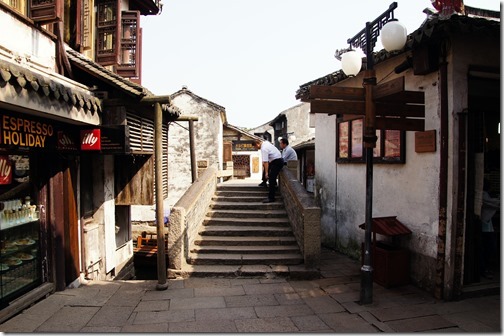 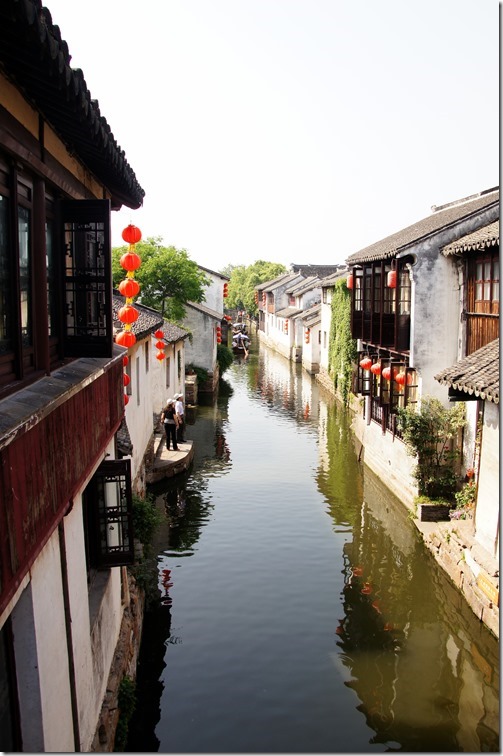 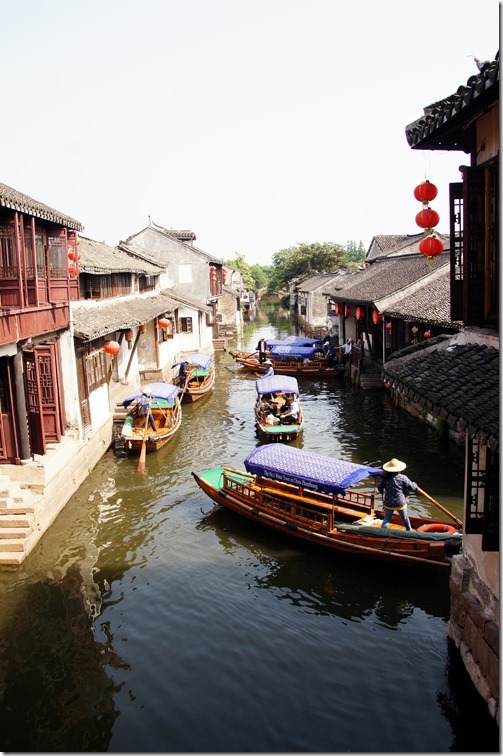 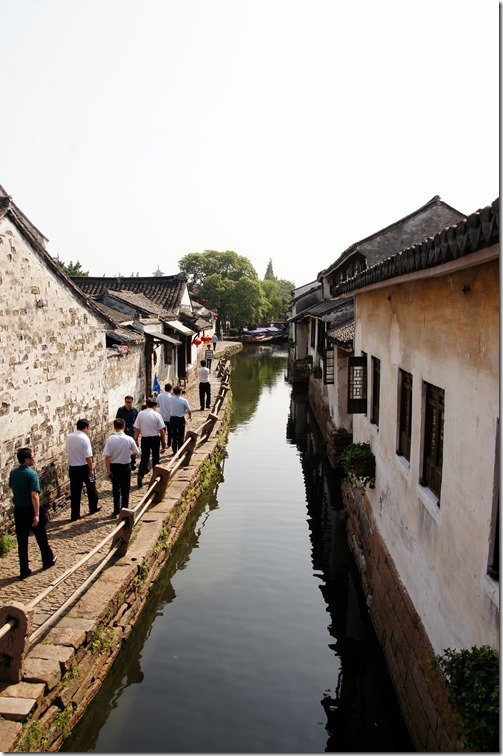 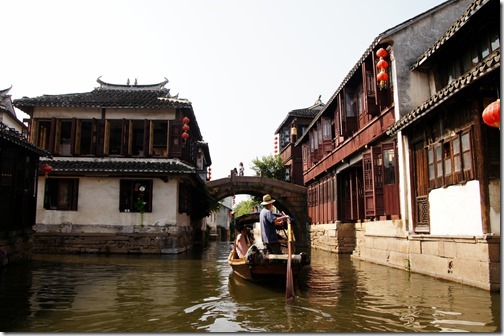 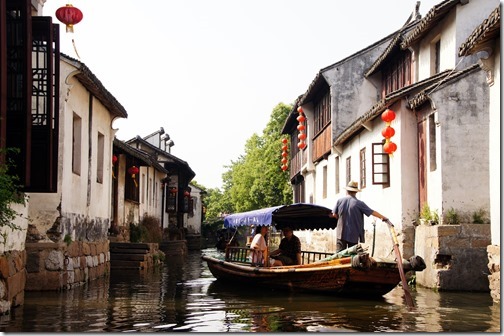 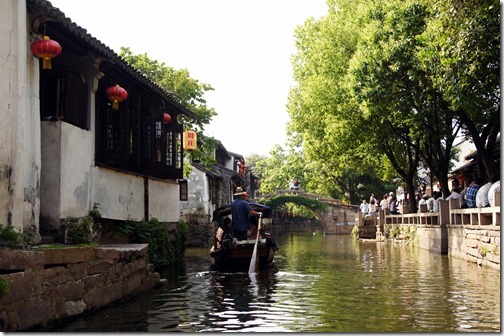 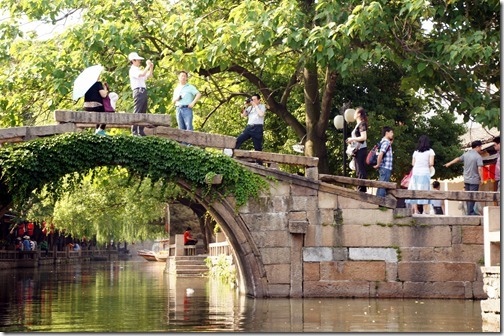 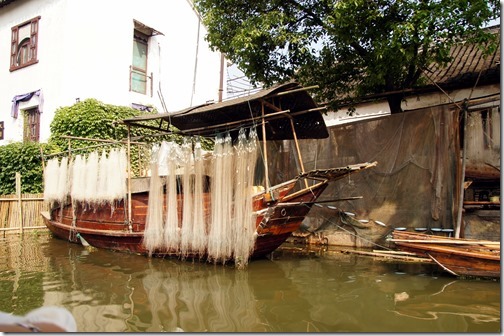 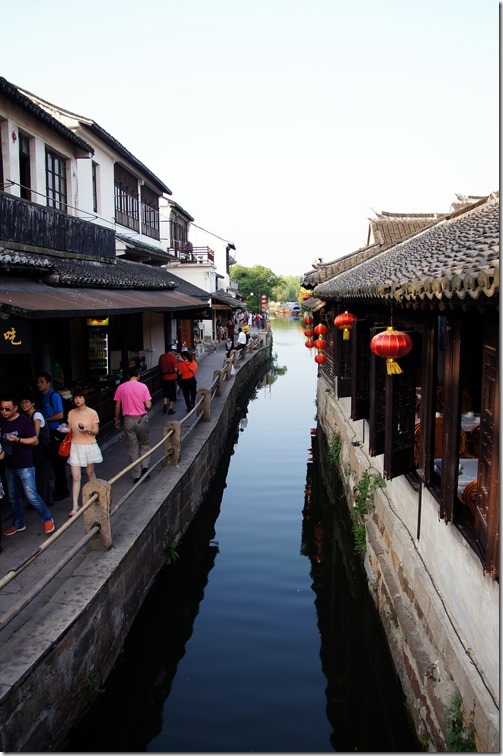 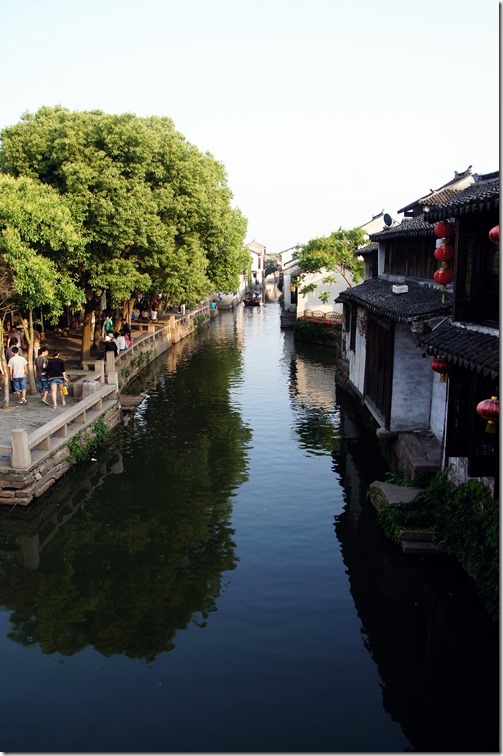 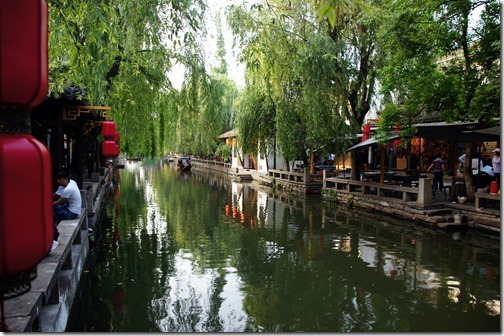 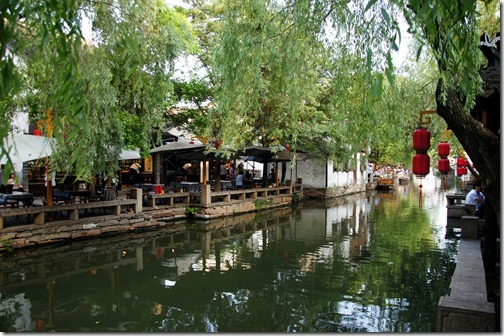 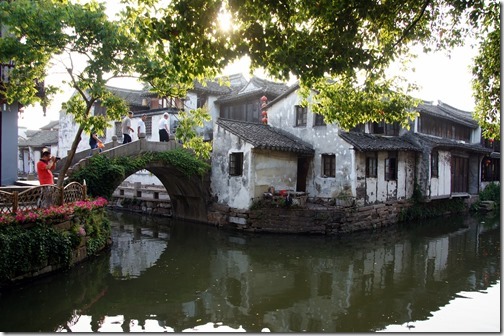 For about a 100yuan, you can rent your own boat, and for another 20yuan you can even have your boatperson sing you some songs – though it seems like these people aren’t very gifted singers.

All in all, a very pleasant daytrip away from Shanghai or Suzhou. If you’re into watertowns, compared to the others I’ve seen I’d say this is possibly as good as it get.

More on the Zhouzhuang water town to follow later…