Visiting Chi Nan Temple at Muzha-Taipei earlier this week, I thought it was time I get some heavenly guidance as to how my life is going and what I should do in the future.

Following the instructions given to me, I used the two moon lips to ask the local Gods for their help, stating my name, where I’m from and what my personal question is. Once I got a positive answer that they’re willing to help, I went on to randomly pick one of the sticks, and confirmed with the Gods that that was indeed the one stick meant for me.

With the help of a local advisor, I was made to understand the answer given to me. Having some concerns regarding my current academic choice here in Taiwan I was asking – “Is Taiwan the right place for me to live in (study,work etc)?“.

Surprisingly, they also had an English version for what the Gods responded, and here it is : 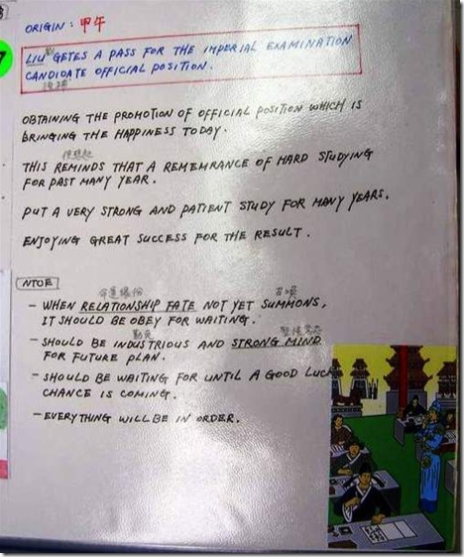 It’s a poetic story about a scholar called Liu who had invested great efforts into studying for the imperial exam and finally made it to become a very successful official in the Chinese empire. Needless to say, that made him very happy.

I think is a nice way of saying that one should follow through, despite of the difficulties, after which there’s rewards and happiness waiting at the end. A very very Taiwanese way of seeing things, I must say. I especially love the “Should be industrious and strong mind for future plan” and the comforting “everything will be in order”. The advisor concluded that Taiwan is definitely the place for me to stay and keep doing what it is that I’m doing.

Well, I had the perfect opportunity to test that the day after when I encountered – yet again – some more near impossible cross-cultural difficulties and general lack of communication with some of who I’m made to work with in the next few years. I hope those Gods know what they’re talking about.