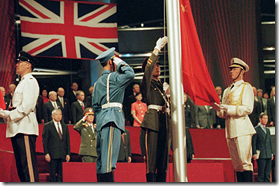 This one completely overtakes the Taiwan myth that everyone in Taiwan speaks Mandarin or that Taiwan is very Chinese. After all, most of the 6 million Hong Kong people that came here after the Japanese brought the numbers down to 6 hundred thousands during the second world war occupation, were from mainland China, from all sorts of places, so one would expect that there should be some Chinese aroma to it all and that Mandarin would atleast be heard somewhere in the streets by more than just mainland tourists. But it’s not. Hong Kong’s been part of mainland for over 10 years now with China trying to promote Mandarin as the official administration language or atleast as the official second language. But so far – as far as I can tell – with little success. I think Chiang Kai Shek and the KMT did it faster with Taiwan. To me it seems that most Hongkongese don’t speak English or Mandarin very well, and that they’re quite comfortable with it. Why wouldn’t they be? what reasons would they have to speak either colonizing language? As far as I can tell, Hong Kong has its own distinct people and culture. Maybe that will change by the time Hong Kong will be fully absorbed into China in around 40 years.

This one competes with the famous India myth that everyone in India speaks English. After all, the British ruled Hong Kong for 99 years and had even longer in India, and since the British practically forced their culture upon all administrative and education functions then that means that everyone in Hong Kong should be very British by now and that they all speak perfect British accent English.

Nothing could be further from the truth. It was shocking to once again to rediscover that Hongkongese don’t necessarily speak English and if they do – they don’t speak it very well, and I’m not talking about their Cantonese sounding English accent (see Lethal Weapon 4 with Uncle Ben for clarification). The better educated naturally speak better English, but that holds true for the rest of the world as well, Taiwan included. The average service provider, the average person on the Hong Kong streets, the taxi driver, and most of the people I had interaction with – their level of English wasn’t very impressive. I’d say it’s about the same as the level of English I encounter in Taipei.

As for the Hongkongese being British, aside from the double-deckers, a few buildings around Central and the fancy cars and suits in the commercial districts, I find very little to suggest that Hong Kong had anything to do with the British. Were they really there?

(BTW – seems like I’m not the only one writing about that. Take one 7 year HK resident as a recent blogging example.)

I was reading somewhere that Hong Kong was not “Chinese” enough for Beijing, so they have increased efforts to use the education system as a primary tool for better nationalizing Hong Kongers. This means increased time on lessons that teach Chinese nationalism, “Chinese” culture, new “histories” of the “Chinese people”, and citizenship.
Imagined communities, my friends… and many of the people China claims to be Chinese are simply unimaginable to them or do not imagine themselves to be a part China. There is nothing inherent about being Chinese. It is learned.

AK – IMHO, as a foreign observer, HK might be more “Chinese culture” than mainland with Confucian, Taoist and Buddhism practices that were under attack in mainland for a long time and now quickly making a comeback.
What “Chinese” actually means has a strong definition problem. Is it “culture”, a certain behavior? maybe ethnicity? is it a “group of people” (more general than ethnicity) or does it define nationality? the mis-interpretation, or intentional mix between those definitions creates all sorts of political problems.

hi, Fili, I think you seem to have a good grasp and appreciation of HK and its language issues as somebody who’s only been there for a short time. Although I would still say there are more Hkers who are proficient in english than Taiwan, for instance in the civil service and airports, and also you do have many people working in service sector who speak some mandarin. Nevertheless you are correct in that many Hkers don’t speak english well at all, especially for a former British colony. About your posted comment, that is so true. It’s easy to judge… Read more »

I think that’s the beauty of Hong Kong, they’re neither too British or too Chinese. If it weren’t for both cultures they wouldn’t be the country/colony that they are today. Very beautiful place I must say.

I am from Hong Kong, and what you’ve said is true. People in Hong Kong speak Cantonese as the main language and also use a different writing system, we use Traditnal Chinese where as China i.e. Beijing, uses simplified. However there are a lot of people coming from Mainland China to live in Hk nowadays. About the English speaking part, schools teach English (and Mandarin) so the younger generation are getting more familiar with it but of course there is the accent. However the slightly older generation won’t be as well versed. 🙂 On another note, this article was very… Read more »

Sorry to point out a mistake here in this article: “the British ruled Hong Kong for 99 years and had even longer in India” The Brits ruled Hong Kong Island since 1841 and left in 1997, while British Raj began in 1858 and ended in 1947. If one calculates correctly, the Brits had ruled Hong Kong for over 150 years while British Raj lasted for less than 90 years (before 1858 India was under Company Rule). A prompt amendment would be appreciated. As an aside, in response to the author’s question: “As for the Hongkongese being British, aside from the… Read more »

Dear Suki, you’re absolutely right, my apologies. I wrote this when I was quiet ignorant, but have since lived in Hong Kong for over 5 years and understand your comments. Since this is a personal post reflective of my ignorance at the time, I’d like to leave it as is, serving as a reminder to the process I’ve been through, but here in the comments I’ll agree with you.