Meinong (美濃鎮) of Kaohsiung County (高雄縣) in southern Taiwan is an area famous for its traditional Hakka folk culture with over 90% the population of Hakka ethnicity. A few weeks back I went with John to explore a bit more of “The Real Taiwan” (:P).

Hakka is one of those things in Taiwan that I wish I would know a bit more about. I would have to admit that I’m completely ignorant about most of how those people came to Taiwan and what they were up to ever since, so this trip was a good opportunity to catch up on that gap.

The Hakka (Mandarin: Kèjiā) are a subgroup of the Han Chinese people who live predominantly in the provinces of Guangdong, Jiangxi, and Fujian in China. Their ancestors were often said to have arrived from what is today’s central China, centuries ago. It is still a contested issue where the Hakka originated. It is said that in a series of migrations, the Hakkas moved, settled in their present locations in southern China, and then migrated overseas to various nations throughout the world. The Hakka have had a significant influence on the course of Chinese and overseas Chinese history: in particular, they have been a source of revolutionary, political and military leaders. […]

In Taiwan, Hakka people comprise about 15% of the population and are descended largely from Guangdong: they form the third largest population group on the island. Many Hakka moved to lands high up in the hills or remote mountains to escape political persecution. Many of the Hakka people continue to live in these hilly locations of Taiwan.

Taiwan’s Hakka are concentrated in Hsinchu City and Hsinchu County, Miaoli County, and around Chungli in Taoyuan County, and Meinong in Kaohsiung County, and in Pingtung County, with smaller presences in Hualian and Taitung County. In recent decades many Hakka have moved to the largest metropolitan areas, including Taipei, Taichung, and Kaohsiung.

The arduous journey made by Taiwan’s Hakka people from the Chinese mainland not only cemented their cohesion but also offered them new horizons. Facing Taiwan’s diverse geographic and, sometimes, perilous ethnic environments, they, as a minority group, had to develop a new identity and change according to local conditions. They thus created a distinctly new Hakka homeland, markedly different from those left behind in China.

It was this survival instinct of early Hakka immigrants in adapting to local circumstances that led to the gradual development of new aspects of Hakka culture in Taiwan that would have been unimaginable to their ancestors. After arriving in Taiwan, those Hakka from Guangdong and Fujian Provinces, who identified themselves as “original Hakka” based on geography and clanship, underwent a process of reorganization, development and struggle. Eventually they became “immigrant Hakka” based on their new location and the coalescence of different subgroups.  […]

English information on what to do in Meinong is available in the Kaohsiung County website.

Anyways, driving through Moon World we started off from getting lunch at the near-by town’s old center in what seemed like a clothing shop combined with a coffee place:

First stop at Meinong was the culture Hakka folk village :

Where a lot of local crafts were sold by the locals :

Although very touristic I enjoyed walking around and watching the strong colors and relaxed green atmosphere.

I’m not sure why, I thought there was something magical about this carriage …

I especially liked the countryside views from the second floor… 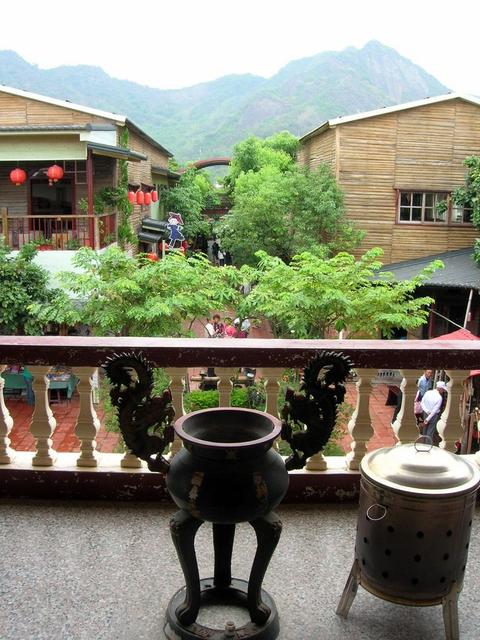 More on the rest of the trip, later on…