Haaretz, the best Israeli newspaper, has an excellent article on Taiwan. Dror Mishani, Haaretz’s reporter, has been invited to Taiwan to explore some the Taiwanese culture and look into some of the connections between Taiwan and Israel.

It’s a long fascinating article, but for the time being I’ll focus on one surprising section regarding the reporter’s visit to Tainan, where I – probably the only Israeli in the area – am living and studying. Here’s my very quick translation from Hebrew to English (photo by Dror Mishani) : 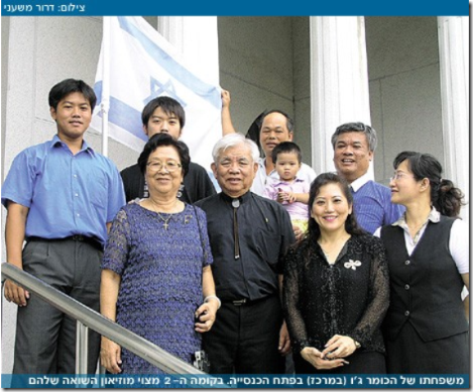 (Caption writes – "Priest Joe – in the center – and his family at the entrance to their church. Second floor is their holocaust museum")

[…] The next day, in the beautiful town of Tainan, where the Dutch fleet first arrived during the 17th century and were later deported by the famous Chinese general – Kosinga […] – the Mayor of Tainan began our talk by announcing that "Taiwan is a multi-cultural country".

Sue’s position on Taiwanese independence, as a member of the DPP, is far more extreme than that of the current President – "President Chen must insist on independence", he says, "even at the cost of upsetting the US. Taiwan should be independent because more and more people recognize themselves as being Taiwanese".

The change in the Taiwanese perception of national identity he attributes to opening the gates for trade and travel between China and Taiwan, resulting in Taiwanese traveling to China and "noticing the differences". But also to that "the government has acted to reveal the Taiwanese history and culture". He further adds that he has been successful in bringing back 2,200 aboriginal people from the mountains into the city.

Joe Chou, who I met in Tainan later that day, isn’t one of those Aboriginals, but he’s undoubtedly a living proof of Taiwan’s multi-culture and diverse meaning of Taiwanese identity.

Priest Joe, or in his Chinese name – Chou Chou-An, was born over 80 years ago in the Tainan province to the Siria Aboriginal family, that resided in the area of Tainan before the Dutch arrived. Joe’s father accepted Christianity, that was brought in by the Europeans, and has designated his son to be a priest.

During  the Japanese occupation Joe was sent to Osaka to study with Father Takago Otzuki, a passionate fan of Israel and the Jews, and who – according to Joe – has prophesized in 1938 that Israel will become independent within 10 years and that the re-building of Israel will help bring back the Messiah. After coming back to Taiwan, priest Joe founded a small church in Tainan and traveled to Israel a few times. Like his mentor, he believed that peace will come to the world only when Israel will be at peace.

The museum is situated on the second floor of Chou’s family church, which holds no figures of Jesus ("we believe in Hashem", he suddenly says in Hebrew), and there’s an Israeli flag in the entrance.

This is, undoubtedly, the most unique Holocaust museum in the world : in what seems like a regular residence an Aboriginal origin Taiwanese family was able to construct an independent museum with out any resources, almost with no visitors, and with photos and documents collected from various connections and through the Internet.

On the walls in the stairway leading from the church to the museum there are dozens of photos of "Jews in Europe before the Holocaust". In the center of the living room there’s a TV with a DVD and a stereo-system, and Alex screened the footage from "March of the Living" that was held in Poland while an Israeli song was playing in the background. In the corner there’s a  small souvenir shop with decorated vases that has the word Holocaust written on the bottom in English and Mandarin.

From the living room we left to a hall way leading to 6 rooms, each dealing with a different aspect – "Hilter takes over Germany", "The camps", "Children of the Holocaust" etc. […]

When trying to explain his special connection to Israel and the holocaust, Alex said that "God clearly chose the Jews as a model. The Jews spread around and forgot their land, and through the Holocaust God reminded the world – if you’ll do the same you’ll be punished like the chosen people". As for the Aboriginal history he says – "we also had our own holocaust and occupation and now we don’t have independence. Jews are our model". […]

Later on, Alex told me in the car that there’s another connection between Israel and Taiwan. Tainan is a sister city of Raanana (Fili – where my brother currently lives in Israel 🙂 ).

Remarkable. I already met, by sheer coincidence, the architect who constructed the museum, who – after learning I’m an Israeli, has asked me to come visit and meet the priest. I look forward to that.

Hi, I would like to know the address of the Holocaust Museum in Tainan/Baoan.

Could you please tell me it? Chinese address is perfectly acceptable. And or a phone number for the place.

Steve – you can find all the details I have here – http://www.itainan.org/directory/tainan-holocaust-museum .