There’s something magical about Sheung Wan. Only a short walk from the hustle and bustle of SOHO and LKF is this odd little local neighborhood that is a complete contrast to the modern insanity of the Central and Admiralty financial districts. Every time I visit that neighborhood I get flashbacks from my life in Tainan, the Chinese-medicine smells mixed with an aroma of incent, half naked locals loading trucks, small Dai Pai Dong street eateries and empty streets that lead nowhere. If I had any sense in me, this is where I’d live in Hong Kong. It used to be affordable, too, I’ve been told, though prices – like everywhere in HK – are rising like mad.

Anyhoo, there are a few famous attractions in Sheung Wan that everyone coming into HK goes to visit – that Cat Street Thieves’ market @ Lascar Row, the nearby Man Mo Temple, the over-commercialized Western Market, that lesser-known peculiar HK Museum of Medical Sciences and – ofcourse – the bizarre Chinese medicine shops with all sorts of things you’ve never imagined would be good for you that are said to treat all the illnesses you never knew you had.

But Sheung Wan is so much more than that. It has endless hidden gems and if you can spare a moment you should definitely take a moment to venture off the tourist trail and see where the streets of Sheung Wan would lead you. 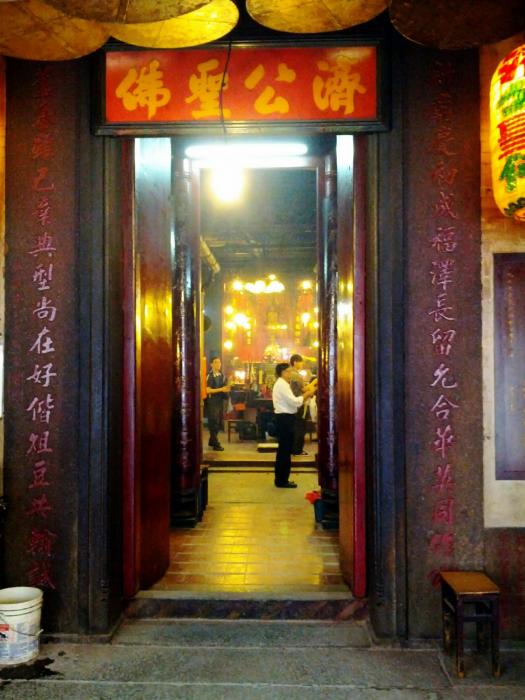 One such street is Tai Ping Shan which hosts a few tiny temples of big significance. Lonely Planet has a paragraph to share :

Tai Ping Shan, a tiny neighbourhood in Sheung Wan and one of the first areas to be settled by Chinese after the founding of the colony, has several small temples clustered around where Tai Ping Shan St meets Pound Lane. Kwun Yam Temple (34 Tai Ping Shan St) honours the goddess of mercy, Kun Iam – the Taoist equivalent of the Virgin Mary. Further to the northwest, the recently renovated Pak Sing Ancestral Hall (42 Tai Ping Shan St) was originally a storeroom for bodies awaiting burial in China. It contains the ancestral tablets of around 3000 departed souls.

The interesting bit in this story, I believe, is that coming in to one of those temple (Pak Sing Temple, showing below) I was very surprised to see a familiar face. One of my dear university department staff was there with her husband, showing her respect to the Gods. I waited a while for her to do her thing and as she was coming out I came to say ‘hi’. I think this is probably the last place she expected to meet me. She then went on to explain that she’s been visiting this temple for years with her family and told us about the origins of this old temple and the main figure worshiped. 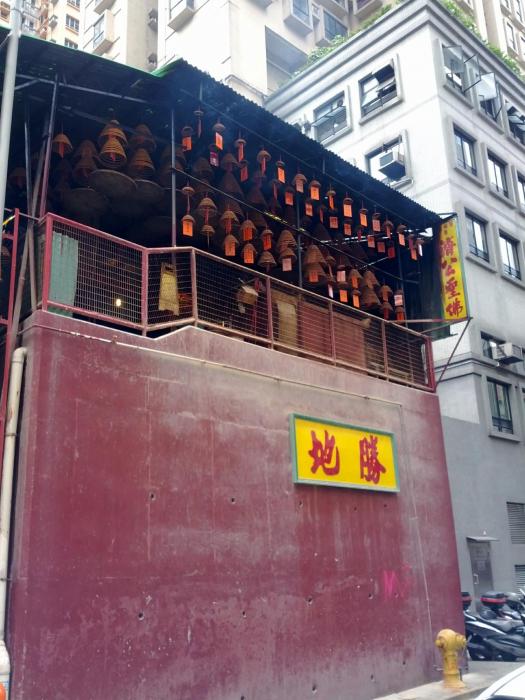 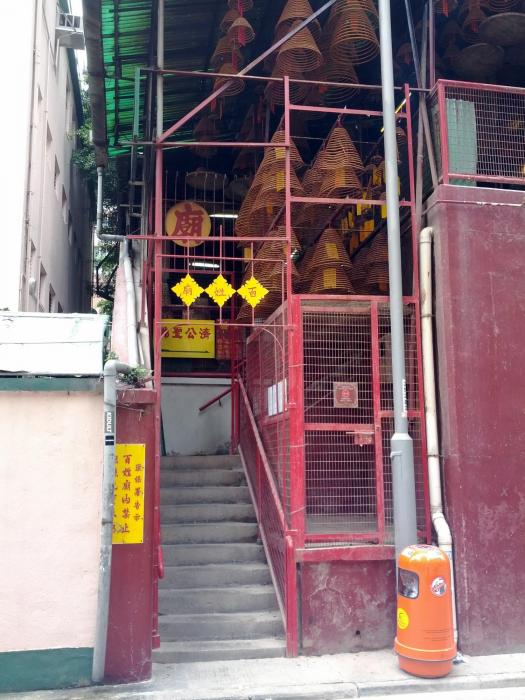 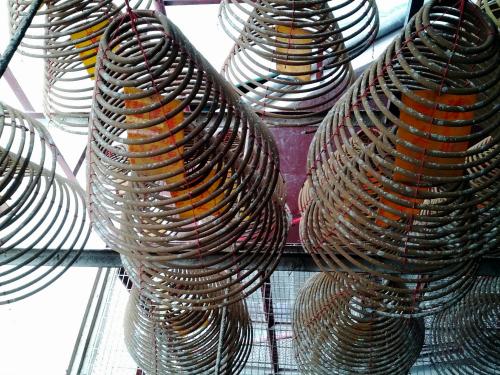 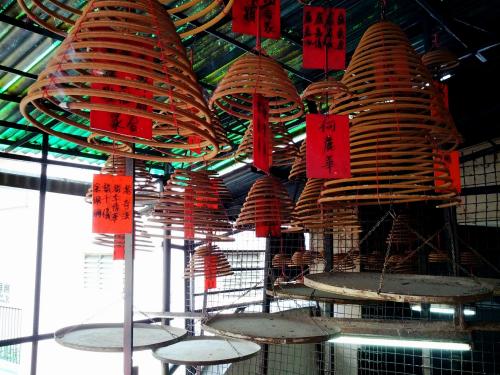 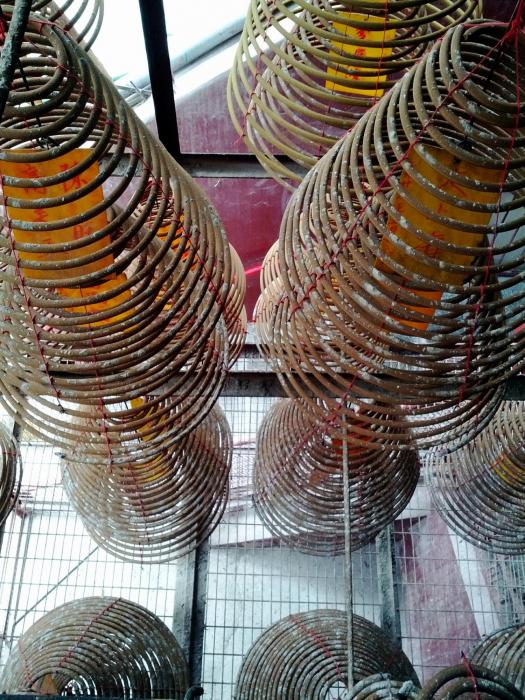 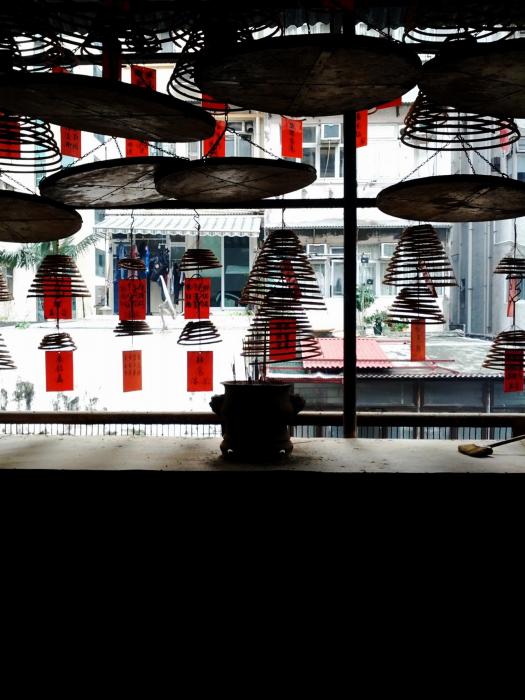 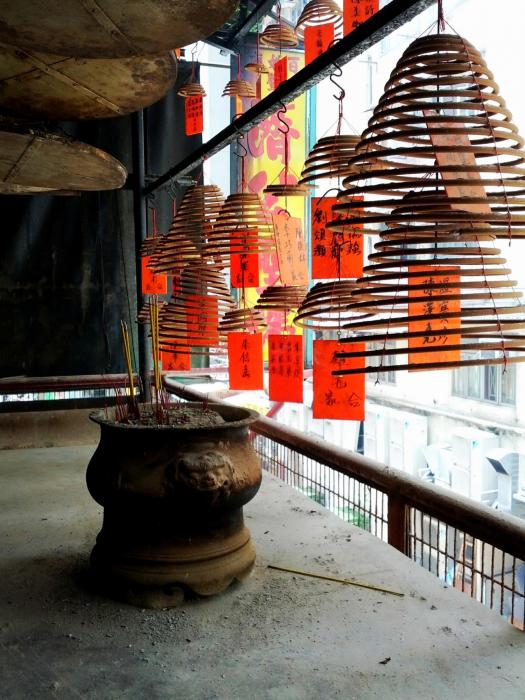 HK Extras has a bit on the temple to remind me what I’ve been told :

I Tsz (meaning a free Ancestral Hall), was built in 1851 on Taipingshan Street to house ancestral tablets of deceased Chinese mainlanders, many of whom had moved to Hong Kong soon after colonisation by the British, to seek a better living. Some had died homeless without relatives to arrange a burial and I Tsz provided a home for commemorative tablets (name plates) to be housed in order that relatives, arriving at a later date, could collect the tablets to take back to the mainland. Later, coffins containing the dead were also housed at I Tsz to await repatriation and some terminally ill Chinese, who had been turned out of their homes in the crowded conditions also found refuge at the temple. Following an outcry over the appalling conditions where the dead and dying lay next to each other with no medical care, the then Governor, Richard MacDonnell, agreed to a long standing request from the Chinese community for land for a Chinese hospital and this led to the founding of Tung Wah Hospital. 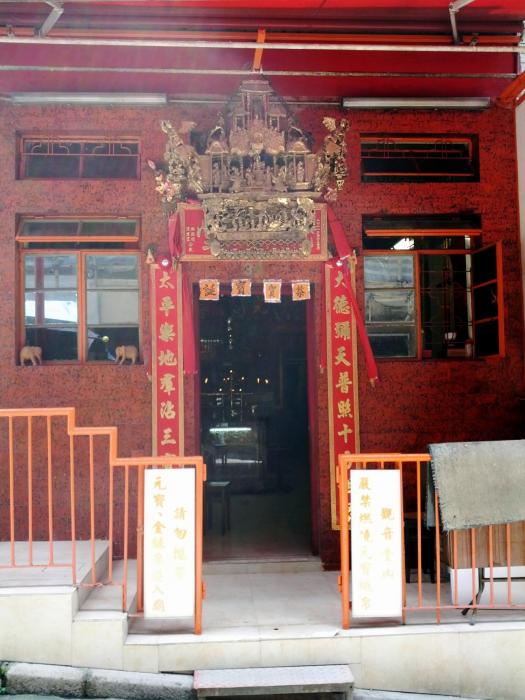 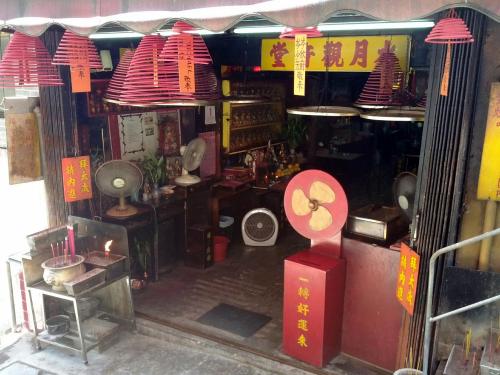 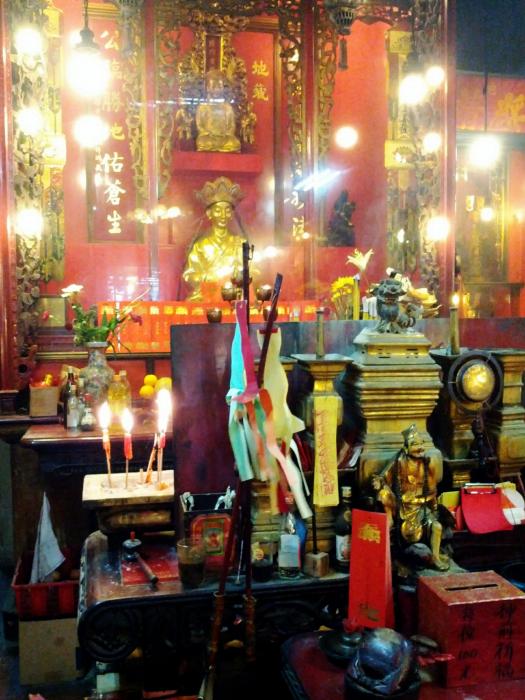 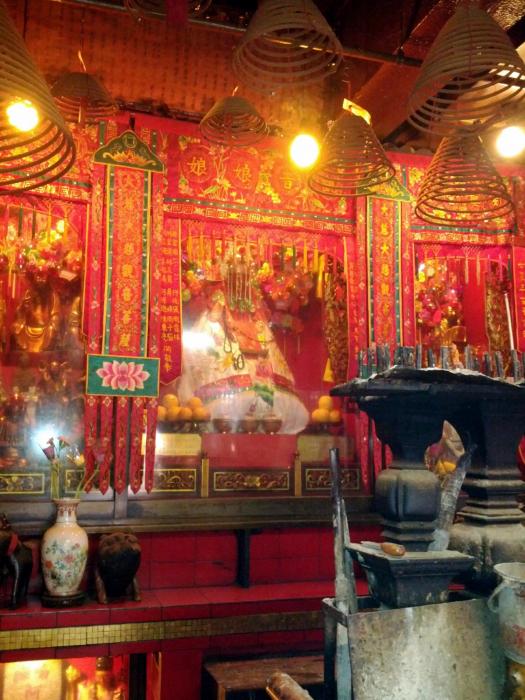 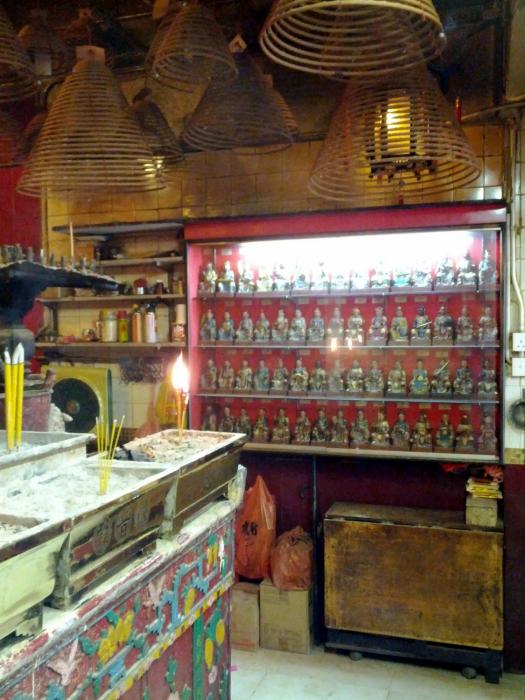 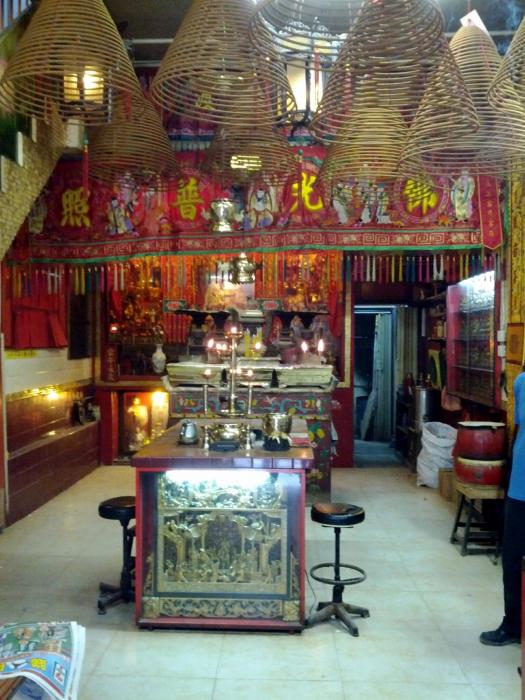 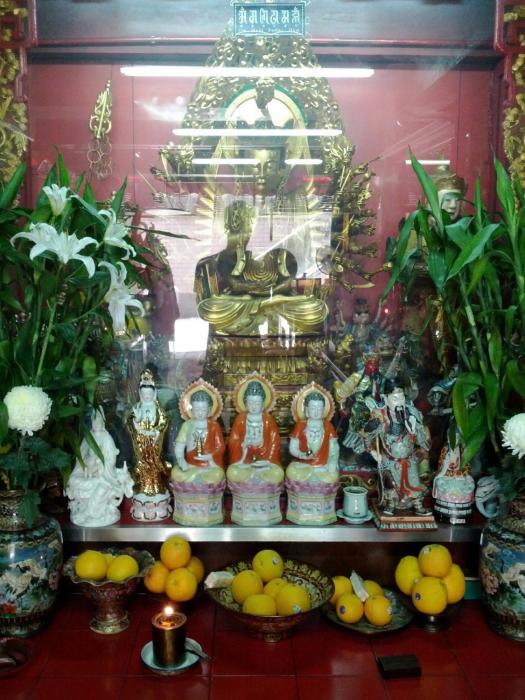 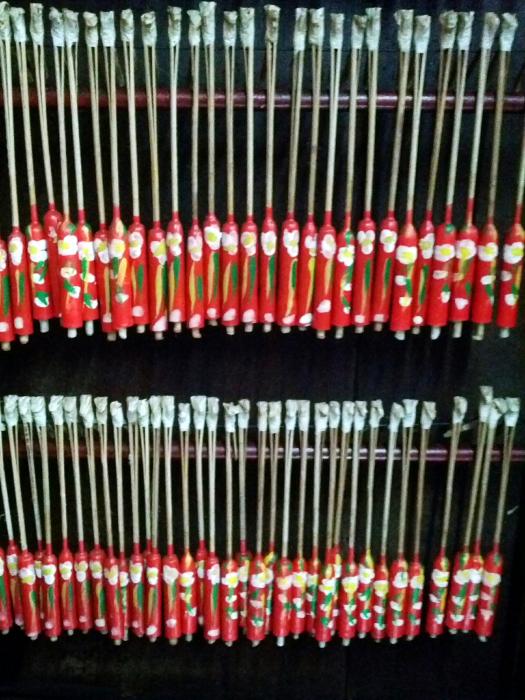 A wonderful little adventure, and with an unexpected personal twist. How lovely.

(Photos taken with mobile, so quality is low)

More on the magic that is Sheung Wan :