Somebody’s going to pay for this mess, I assure you. Such a big disappointment! With Hu Jin Tao and China’s greatest leaders lining up in Shenzhen to watch the 30th anniversary grand fireworks together with hundreds of thousands of local Chinese, there couldn’t have been a greater fall. The fireworks lasted only a minute before becoming a gigantic cloud of pollution that covered the entire area of Shenzhen, hovering up in the skies with dark gray so that even the follow-up 29 minutes of fireworks couldn’t be seen from anywhere. Instead of 30 minutes of spectacular fireworks, all we experienced was suffocation.

Personally, I was trying to watch the fireworks from Lian Hua Mountain Park (“Lian hua shan gong yuan” 莲花山公元) together with many other locals. Honestly, I don’t think I’ve ever heard a crowd of thousands of mainlanders go “boooo” before, but I could feel their frustration and disappointment. Not a good way to boost national pride, and a serious loss of face, so I’m guessing somebody will be paying for this fiasco with atleast his job. 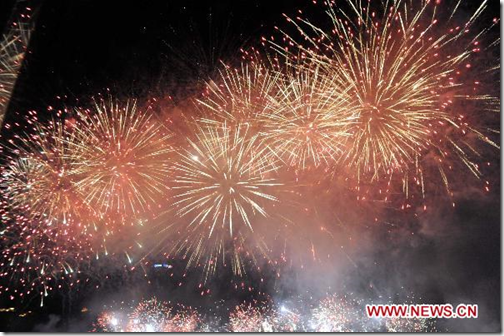 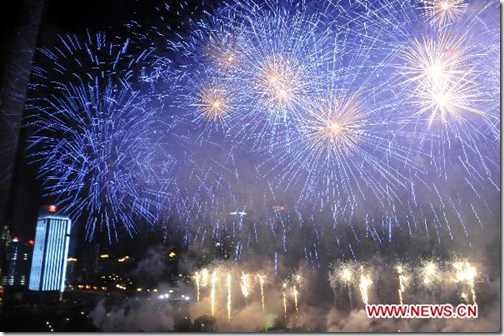 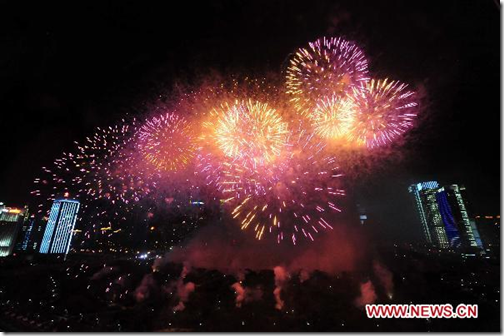 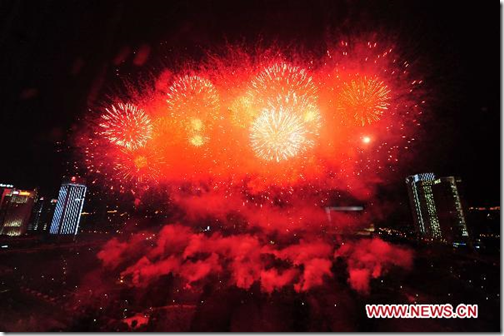 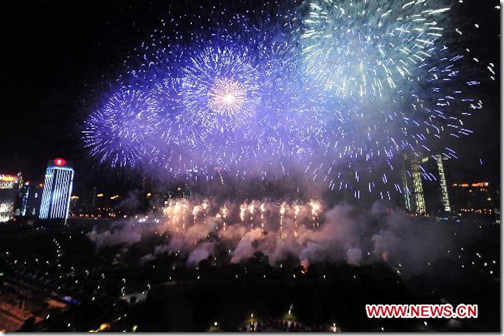 Here’s a bit of what the newspapers had to report about the occasion. 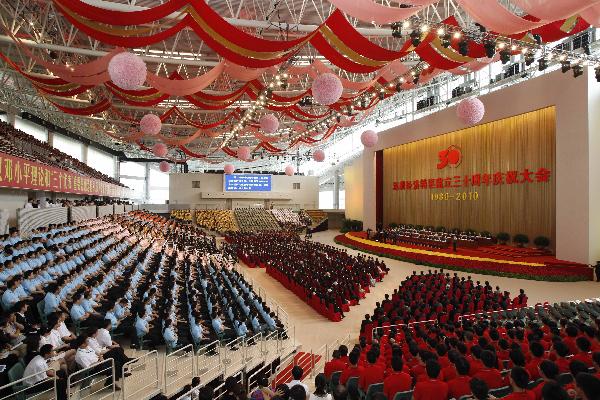 Hu, also general secretary of the Communist Party of China (CPC) Central Committee, said the Shenzhen SEZ has been the scene of miracles in industrialization, urbanization and modernization.

He said the SEZ has made important contributions to the country’s reform and opening-up.

Li Ka-shing, Chairman of Cheung Kong (Holdings) Limited, said in a speech the Shenzhen SEZ was the “driving force” of China’s reform and opening-up.

“Overseas Chinese have been heartened and convinced by the achievements of the country’s reform and opening-up,” said Li, Hong Kong’s richest man.

Wang Rong, secretary of the Shenzhen Municipal Committee of the CPC said Shenzhen will continue to play the role of “first mover” and strive to be at the “vanguard of China’s scientific development.” He said Shenzhen is endeavoring to build itself into a “modern and international” metropolis.

Once a small fishing village, the Shenzhen SEZ has evolved into a metropolis over the past three decades. It is also the birthplace of many high-tech enterprises.

It’s been 30 years since Shenzhen was established as a Special Economic Zone in south China’s Guangdong Province. A celebration rally was held on September 6 in Shenzhen where President Hu Jintao delivered a speech on its achievements and future development.

Hu said the Central Government will always support the special economic zones embarking on “brave exploration” in their roles as “first movers.”

“The success of Shenzhen proves the decision of setting up SEZs in China was correct,” Hu said. “The reform and opening-up policy was a crucial choice for modern China and that reforming and opening up to the outside world is the only road to achieving national prosperity and the people’s happiness.

“China’s development and changes over the past 30 years have relied on reform and opening-up, and the great rejuvenation of the Chinese nation will rely on reforming and opening-up,” he said.

As a window for China’s reform and opening-up policy, Shenzhen has grown from a small fishing village with a population of 30,000 to an international metropolis of 10 million.

Lianhua Mountain Park (Lotus Mountain Park; 蓮花山公園; Liánhuāshāngōngyuán), Hongli Road West, Futian Central (Metro line 4 (Shaoniangong Metro Station) Bus no 25 from Shenzhen Railway Station. Bus stop is “Lian hua shan gong yuan” 莲花山公元). This is Shenzhen’s main and most central park. Set at the northern end of the Futian central access it is 150 ha of urban bushland. The gardens themselves are extremely beautiful and meticulously cared for. But to really enjoy the mountain, you need to be there with Shenzhen’s middle calsses early in the morning or on Sundays when large family groups gather to have fun. At the top of the mountain, which you can reach via a twenty minute, not too challenging walk, is a large bronze statue of Deng Xiaoping striding out over the city. Large aerobics groups operate to loud music, people play badminton, a man walks down the path inscribing Tang Dynasty poetry in ever evaporating water with an enormous brush. Further down the mountain, ballroom dancers do the tango, a group of belly dancers wiggle and large men lay into each other with bamboo staves and swords. A famous and totally spontaneous group of singers of revolutionary opera sings by the lotus lake every Sunday morning, a must-see if you are even remotely in the vicinity. They are just past the laughter therapy group and the marriage market. And in season (Autumn), do not forget your kite