Promised myself I wouldn’t, and I almost made it. Almost. But last week when I was visiting the Hong Kong Culture Centre and walked the Avenue of Stars I saw it. Surrounded by hundreds of enthusiastic Hong Kong camera fanatics shooting this PR stunt ducky from all directions, I decided to let go and photograph the damn thing. Yesterday, we bid the monstrosity goodbye. At last, I no longer need to avoid taking photos of the Victoria Harbor. 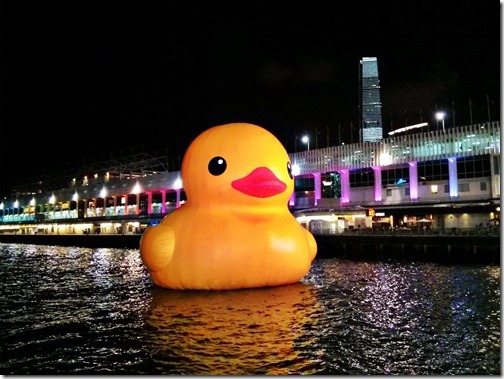 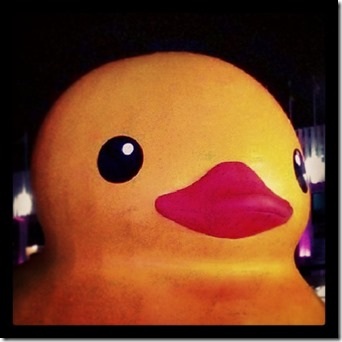 And to really show you the 3Diness of the rubbery thingy… 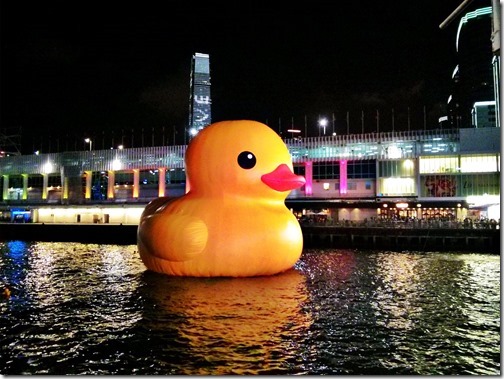 Isn’t it fabulous? Can’t you feel the happiness and the artist expression?

The Hong Kong government promoted this as bringing joy to the world, when it was clearly a PR stunt by the very clever posh Harbour City shopping mall just next to it :

Harbour City has invited internationally acclaimed artist Florentijn Hofman to exhibit his masterpiece – the gigantic inflatable “Rubber Duck” in Hong Kong from 2 May to 9 June 2013. The 16.5-meter-high “Rubber Duck” will travel to Greater China for the very first time and be on display at Ocean Terminal, Harbour City. Since 2007, “Rubber Duck” has been traveling to 10 countries and 12 cities, including Osaka, Sydney, Sao Paulo, Amsterdam and many more.

With Victoria Harbour as its giant bathtub, the “Rubber Duck” is literally the first Hong Kong maritime art exhibition, providing a unique contrast with the surrounding environment. Inspired by the soft yellow bath time toy, “Rubber Duck” is a symbol of joy and happiness conjuring up childhood memories and nostalgia.

Spreading joy further around the city, the exhibition will extend from Victoria Harbour to the Ocean Terminal Forecourt, Harbour City, as well as “Gallery by the Harbour.” With a “Rubber Duck” Photo Exhibition to demonstrate all the places visited by the “Rubber Duck” over the years.

HONG KONG- Thousands said farewell Sunday to a giant inflatable yellow rubber duck which has captivated Hong Kong, on its final day in the city’s harbour before it heads to the United States.

The southern Chinese city has taken the 16.5 metre-tall (54-feet) duck, conceived by Dutch artist Florentijn Hofman, to its heart since it arrived under tow on May 2 to cheering crowds.

Duck mania has gripped the city — and parts of the Chinese mainland — since its arrival, with hundreds of thousands of locals and tourists in Hong Kong flooding the streets near where the giant replica bath toy is moored to catch a glimpse.

In mainland China, copies of the duck made an appearance in several cities — prompting a rebuke from the communist party newspaper the People’s Daily for what it called unoriginal copycat behaviour.

"I hope that it can bring happiness to the people in the different countries it visits," 30 year-old Sam Tsang told AFP.

"The rubber duck has brought us a lot of happiness…I hope it will come back," said 34 year-old teacher Tina Yip.

Seriously, the person who came up with this in Harbour City should get a promotion. Or a slap in the face… you choose.

But, PR stunt aside, people seemed to be enjoying themselves… 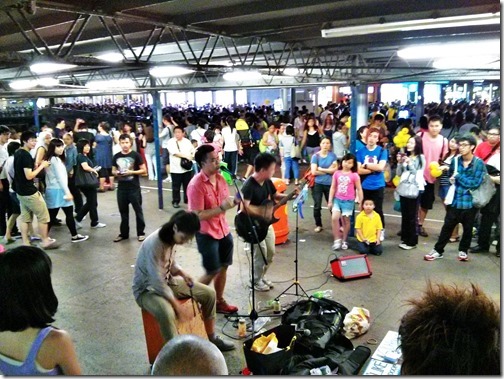