Set 130m high on a mountain next to Shkodër  in northwestern Albania is the Rozafa Castle. Being on top and looking around you can quickly get a sense of why the castle was setup on that specific location, as it offers panoramic view of the northern border of the now Albania. Being a relatively virgin land of little development, the views are almost untouched. 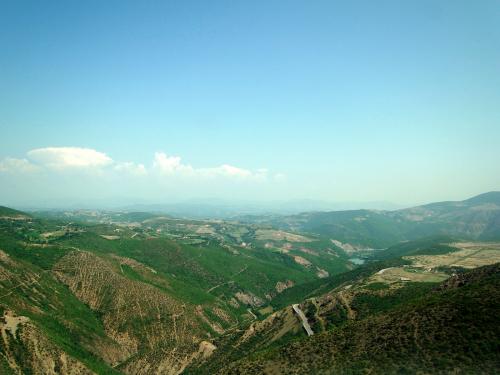 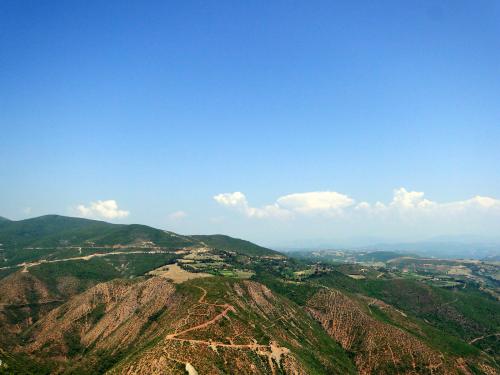 Wikipedia has one of the few resources available on this fort :

Rozafa castle is a castle near the city of Shkodër, in northwestern Albania. It rises imposingly on a rocky hill, 130 meters above sea level, surrounded by the Buna and Drini rivers. Shkodër is the capital of the District of Shkodër, and is one of Albania’s oldest and most historic towns, as well as an important cultural and economic centre.

Due to its strategic location, the hill has been settled since antiquity. It was an Illyrian stronghold until it was captured by the Romans in 167 BC.[1] The 19th century German author and explorer Johann Georg von Hahn suggested that the ancient and medieval city of Shkodër was located immediately south of the Rozafa hill, between the hill and the confluence of Buna and Drini. The fortifications, as they have been preserved to date, are mostly of Venetian origin.

Why Rozafa? there’s a legend behind the name:

Its legend, archeology and history testify to its early existence. The legend is about the initiative of three brothers who set about building the castle. They worked all day, but the walls fell down at night. They met a clever old man who advised them to sacrifice someone so that the walls would stand. The three brothers found it difficult to decide whom to sacrifice. Finally, they decided to sacrifice one of their wives who would bring lunch to them the next day. So they agreed that whichever of their wives was the one to bring them lunch the next day was the one who would be buried in the wall of the castle. They also promised not to tell their wives of this. The two older brothers, however, explained the situation to their wives that night, while the honest youngest brother said nothing.

The next afternoon at lunch time, the brothers waited anxiously to see which wife was carrying the basket of food. It was Rosafa, the wife of the youngest brother. He explained to her what the deal was, that she was to be sacrificed and buried in the wall of the castle so that they could finish building it, and she didn’t protest.

The faithfulness of the youngest brother and the life sacrifice of his young wife are highlighted as elements that acquire symbolic importance. Rosafa, who was predestined to be walled was worried about her infant son, though accepted being walled on condition that they must leave her right breast exposed so as to feed her newborn son, her right eye to see him, her right hand to caress him, and her right foot to rock his cradle. 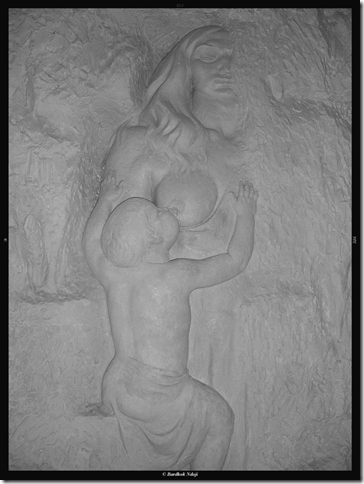 A local Albanian forum has a bit more :

The Rozafa Castle rises on a rocky hill to the west of Shkodra. It is surrounded by the waters of three rivers, Buna, Drini and Kiri. Rozafa is one of the major castles in Albania and the most important tourist attraction in Shkodra. The castle dates back to Illyrian times and Latin historian Titus Livius called it "stronghold of the Labeats" (Illyrian tribe on the shores of Lake Shkodra). Illyrian queen, Teuta, used it as a base in the wars against Rome.

The name Rozafa first appeared in the Middle Ages. The name is linked to the legend ‘of the kept promise’ which is common in one form or another to all Balkan peoples. According to the legend, Rozafa, the wife of the youngest of three brothers, accepted to be buried alive in the walls of the castle. The brothers had been building the castle in the day only to find that the walls had collapsed during the night.

At the entrance to the castle one can see the Rozafa bas-relief. According to popular imagination, the lime water that leaks at the main entrance is the milk running from Rozafa’s breast which was left outside the wall so that she could feed her newborn baby. The castle assumed the shape it has today from the time of the Balsha family rule in the 14th century. Most of the remaining walls of the castle belong to the Venetian period. However one can also find traces of the Ottoman times (16th and 17th centuries) and the Bushatlli period (18th and 19th centuries). The walls of the Rozafa castle are 880 meters long and encircle an area of nine hectares.

Either way, it’s a gorgeous castle with terrific views. 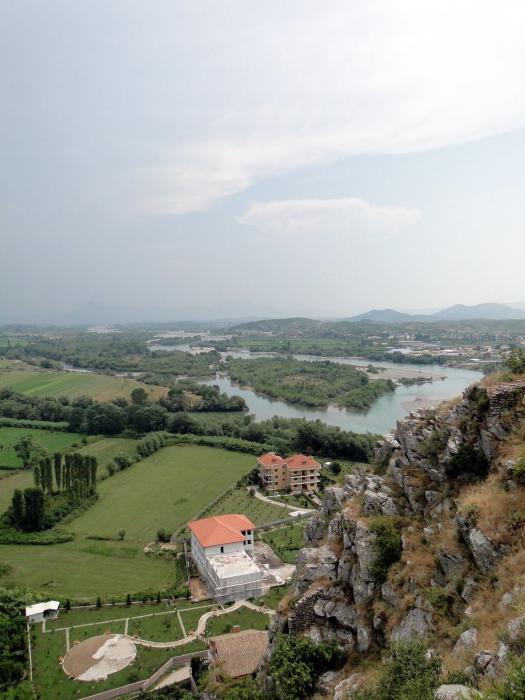 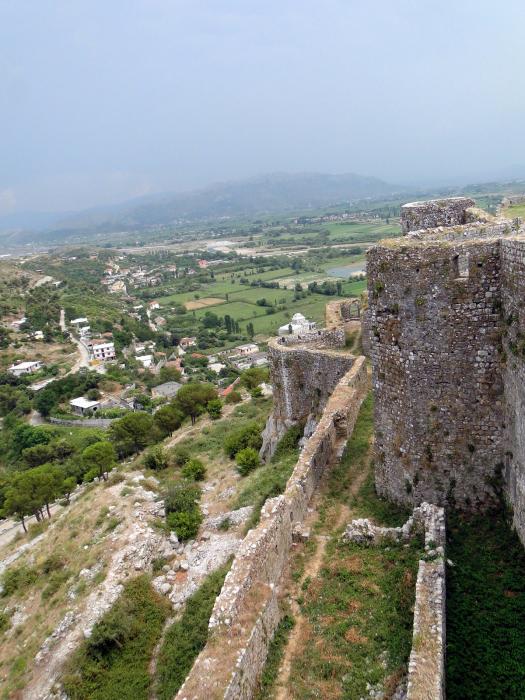 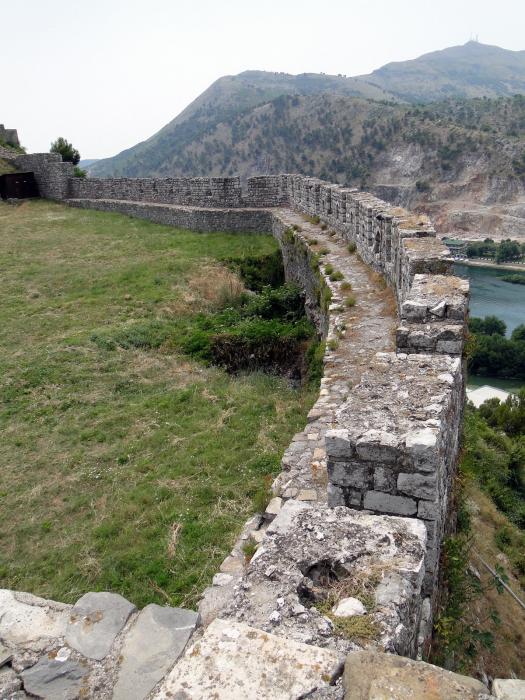 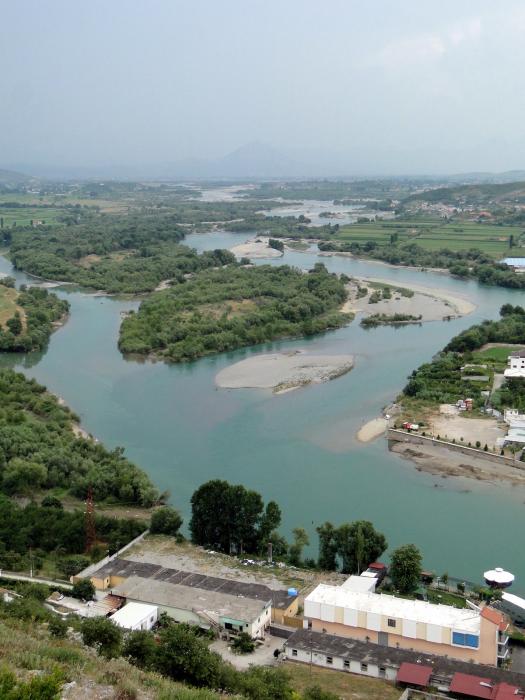 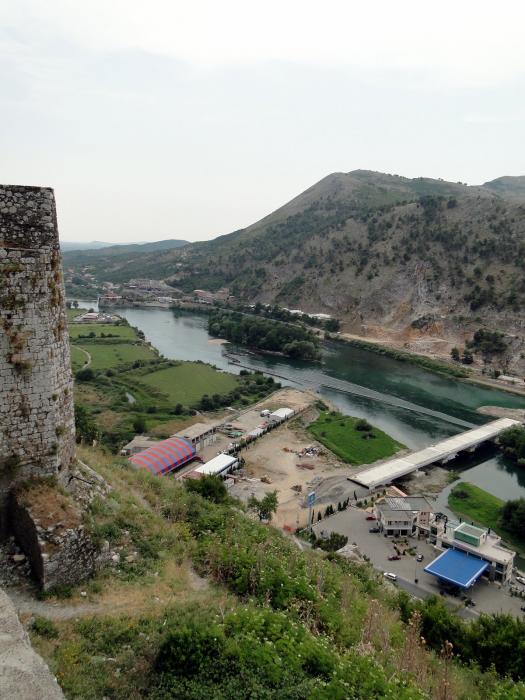 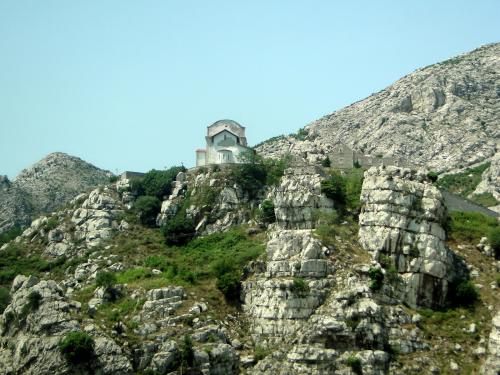 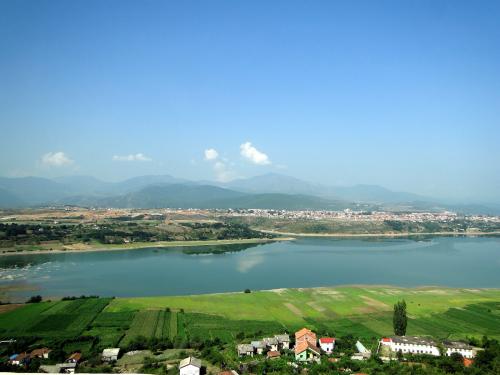 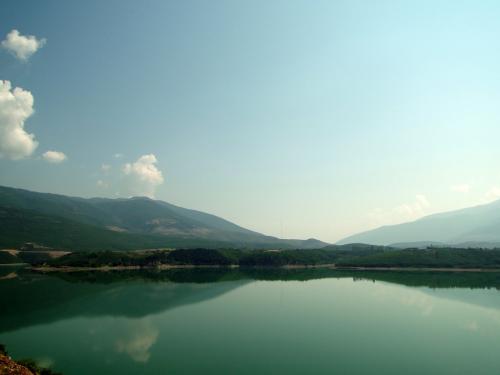 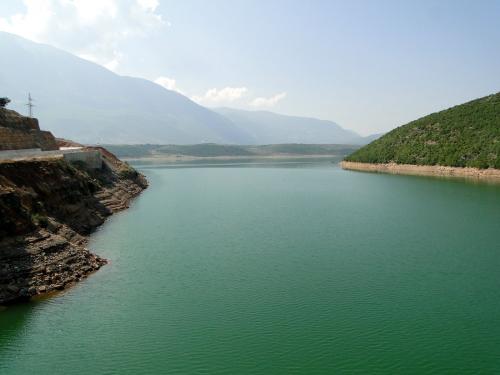 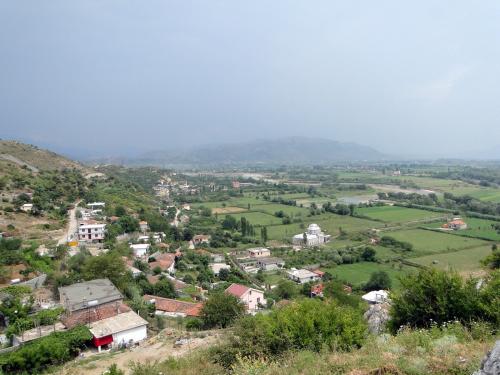 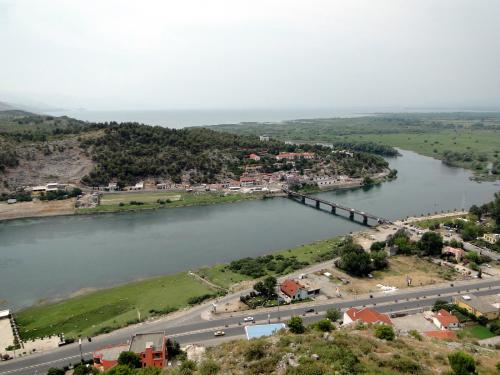 If you’re into panorama, then I have a few …

You can freely walk around in the castle… 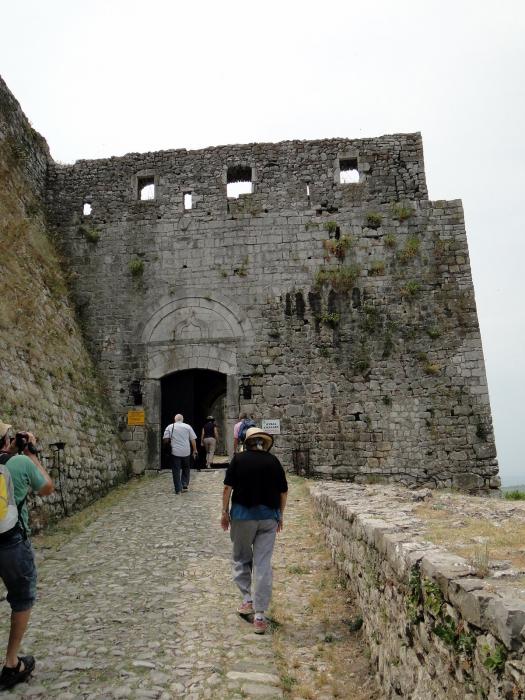 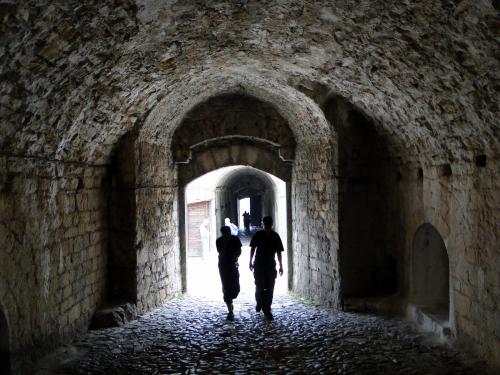 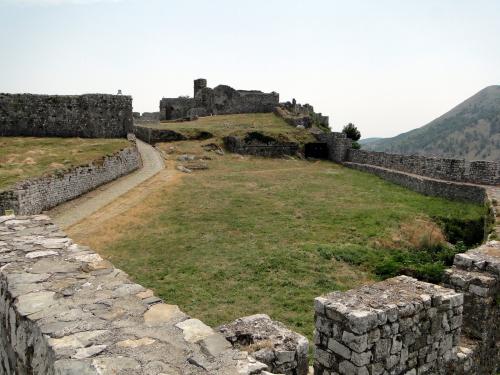 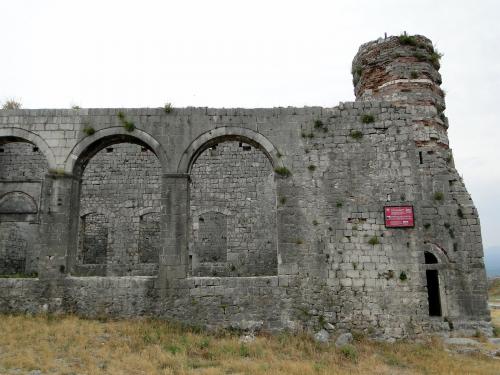 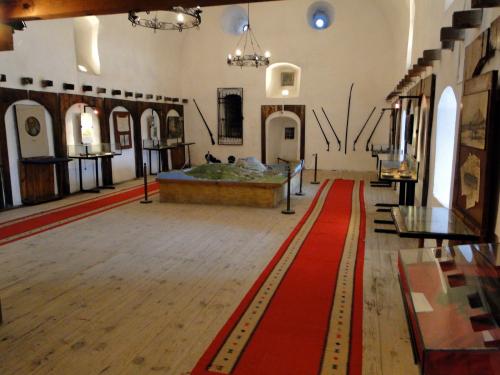 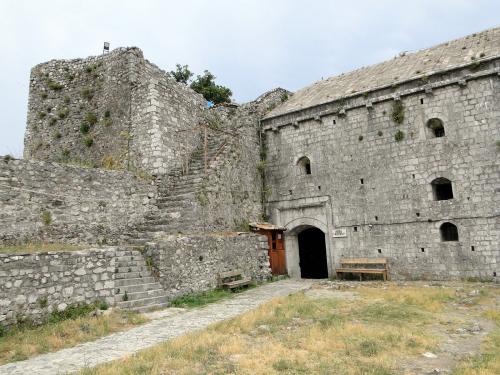 If you’re looking for something to eat, there’s a local restaurant with an atmosphere… 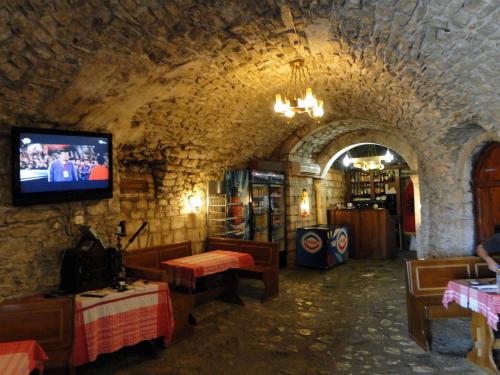 There’s only a bit more on the place here – A Visit to Shkodra.