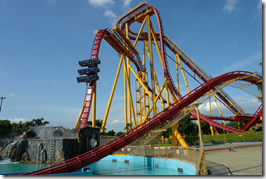 Most people are not aware of this, but the area between Hong Kong, Macau, Zhuhai going up north to Guangzhou has a really dense concentration of amusement parks. It could have to do with the fact that it’s also one of the world’s most populated areas.

About a year ago, I was asked to write an article for a local travel magazine about family travel and the amusement parks in this area. Since I wasn’t paid for my first gig I wrote them, this next one next never made it to publication. I rediscovered it yesterday and thought I might as well share those with you.

It doesn’t really matter what you’re into, whether you’re a kid or an adult, whether you prefer quiet gazing, cultural adventures or wild action rides, they have it all. The southern Guangdong region that stretches between HK and Macau up to Guangzhou hosts some of the region’s, if not the world’s, top parks, filled with all that a family looks for in a fun day-trip away from boring routine.

Opening in 2006, Chimelong Paradise rocked Guangzhou and the region with China’s biggest theme park introducing some of the world’s scariest wildest rides and other world-class attractions. Hosting a combination of an amusement park, a safari, a circus and a water park, a family can spend anything between a day to four days and still want to come back for more. The amusement park provides intense thrills for the daring with a Guinness record holding 10-ring roller-coaster and the world’s tallest diving coaster. There are lots of fun live shows – like Lumberjack and Danger Island – performed through-out the day by foreign stunt teams. The water park is said to be among the biggest in the world – with over 400,000sqm in size, it includes a wave pools, tube rides, and a wide array of high-speed rush-to-the-head waterslides. There’s a circus show that runs every evening and the nearby safari and crocodile park will undoubtedly keep the young ones happy for long.

Heading south, Shenzhen has a combination of a few parks worth checking out. Although shadowed by Chimelong Shenzhen’s Happy Valley still has a lot to fight back with. Space Shuttle is of the few rides that make it worth-while, shooting visitors up 60-meters high and letting go for a free fall. Cartoon City lets kids play with local characters with the close by exciting Maya Water Park and Mt. Adventure. Not too far away are three other parks of slightly different flavor. Window of the World includes a huge complex of over a hundred large replicas of famous and popular world attractions, such as the Eiffel Tower, the Egyptian pyramids, Sydney Opera House and many others, as well as a few adventure rides. Splendid China does the same for the major attractions in China, while the China Folk Culture Village runs wonderful shows all day long showing China’s history and minorities cultures. The two larger late shows at the Village are absolutely not to be missed, so it is recommended that you aim your visit more towards the evening.

Covering over 5 million square meters, Ocean Spring Resort is located at Zhuhai – just out of Macau. The complex includes a SPA & hot springs, a big amusement parks with rides rivaling that of Shenzhen’s and Guangzhou’s, Dream Theater running beautiful acrobatic and dance shows, Caribbean style beach and water fun, and much more.

Together with Hong Kong’s famous Ocean Park and Disney Land, there are few other regions in the world that are quite as exciting. Much to see and do within only a few hours’ drive and perfect fun for the whole family.

Since then, I’ve also became aware of Shenzhen’s monstrous OCT East amusement park. I know there are at least a couple of other large amusement parks at different parts of Guangdong that I’ll have to check out at some point.