A forced stayover in Rome due to the conflict in my intended destination gave me a day to explore the wonders of Rome. I decided to spend the day roaming around the city by foot, walking between Piazzas aimlessly, enjoying the Italian culture, the food and the atmosphere. Tourists aside, this makes for a very pleasant city with hidden treasures in every corner.

Take this Pantheon, for example, an unintended discovery while walking around the Piazza della Rotonda, it’s one of the best-preserved of all the ancient Roman buildings in the capitol dating back to 1st century BC during the reign of Augustus. History, religion, politics, architecture, this building has it all. 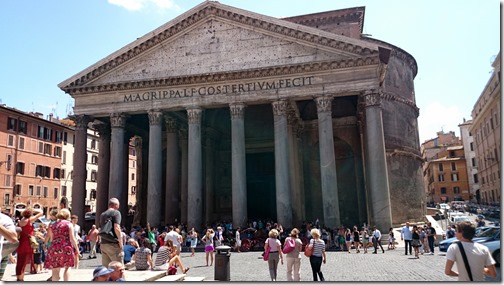 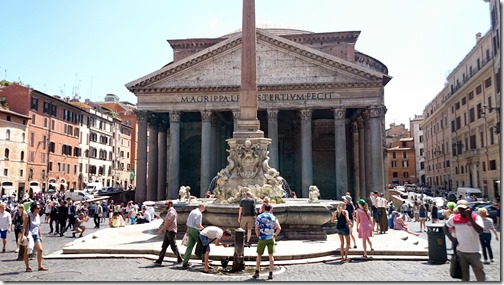 The Roman Pantheon is the most preserved and influential building of ancient Rome. It is a Roman temple dedicated to all the gods of pagan Rome. As the brick stamps on the side of the building reveal it was built and dedicated between A.D 118 and 125.

The emperor Hadrian (A.D 117-138) built the Pantheon to replace Augustus’ friend and Commander Marcus Agrippa’s Pantheon of 27 B.C. which burnt to the ground in 80 A.D.
When approaching the front of the Pantheon one can see the inscription above still reads in Latin the original dedication by Marcus Agrippa. The inscription reads:
"M. AGRIPPA.L.F.COSTERTIUM.FECIT”  “Marcus Agrippa son of Lucius, having been consul three times made it”.

Despite all the marvelous building projects that the emperor Hadrian produced during his reign, he never inscribed his name to any, but one, the temple of his father Trajan. That is why the Roman Pantheon bears the inscription of Marcus Agrippa, and not the emperor Hadrian.

The pediment,(the triangle section above the inscription) is blank today, but there would have been sculpture that acted out the battle of the Titans. Great bronze doors guard the entrance to the cella and would have been covered in gold, but it has long since disappeared.

The original use of the Pantheon is somewhat unknown, except that is was classified as a temple. However, it is unknown as to how the people worshipped in the building, because the structure of the temple is so different from other traditional Roman temples such as in the Roman Forum.

The Pantheon exists today in such amazing form because the Byzantine emperor Phocas gave it to Pope Boniface the VIII in A.D 608 and it was used as a church ever since. The Pantheon has been in use since the time it was built. 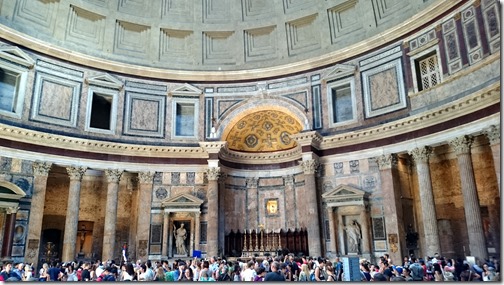 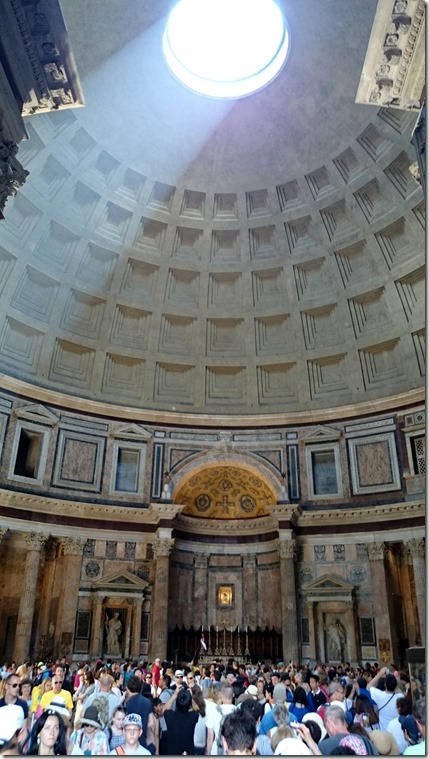 There isn’t that much to see, but if you join one of the many English speaking tour guides explaining about the history and the architecture, you’ll soon discover that each and every little detail is filled with stories and wonder.

Rome and its endless wonders. More to come…