Want to visit all the great French thinkers of all time in person? The Pantheon is the resting place for big names, like Voltaire, Rousseau, Victor Hugo, Marie Curie, and many others. If you’re thinking this is going to be one of those gigantic, dull and unexciting tribute buildings, you’re very mistaken. Sure, it’s big and grand, and set in glorious architecture, but setting it apart from the others I’ve visited (like Rome) the Pantheon in Paris has a really cool vibe to it. It’s filled with funky art that appeals to the masses.

What do I mean? 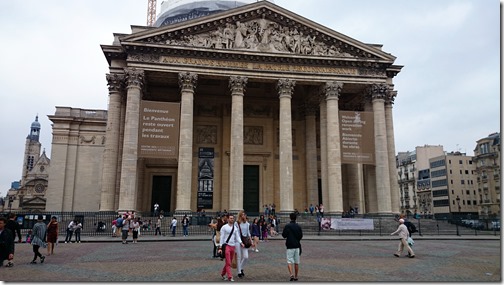 Below is the view from balcony. As you an see it’s absolutely gorgeous architecture, but the faces on the floor below are part of a project that invited the French to come take a photo to show the diversity of the population living in the city. 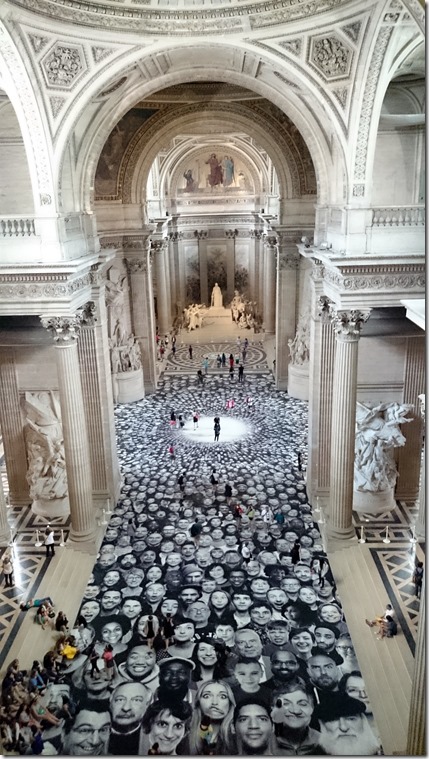 And they’re up on the ceiling as well… 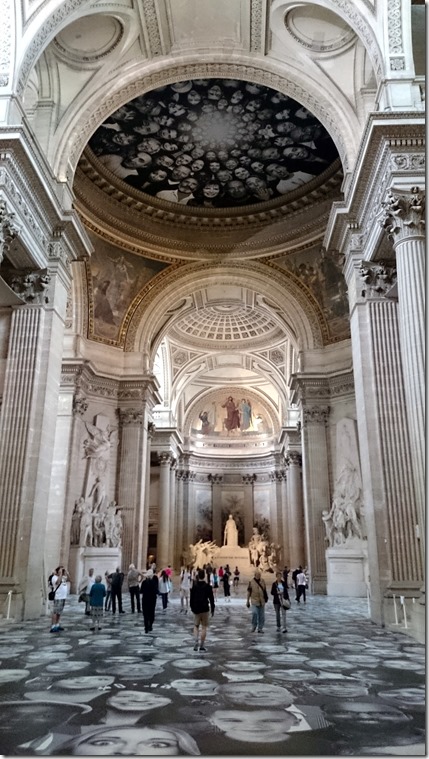 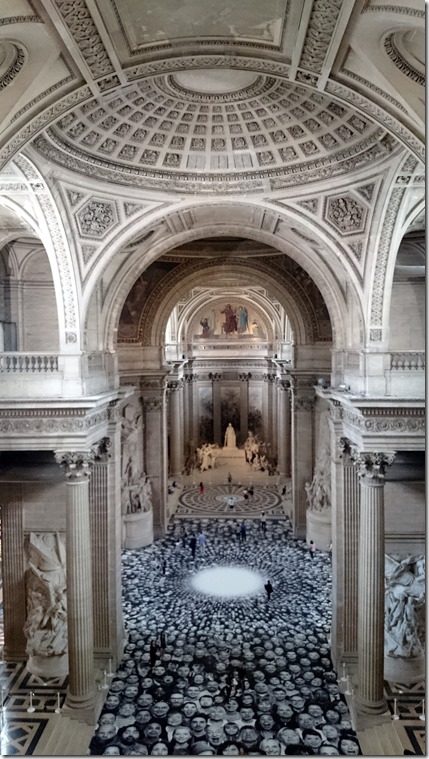 But, ofcourse, this is a Pantheon, so you have many of these things… 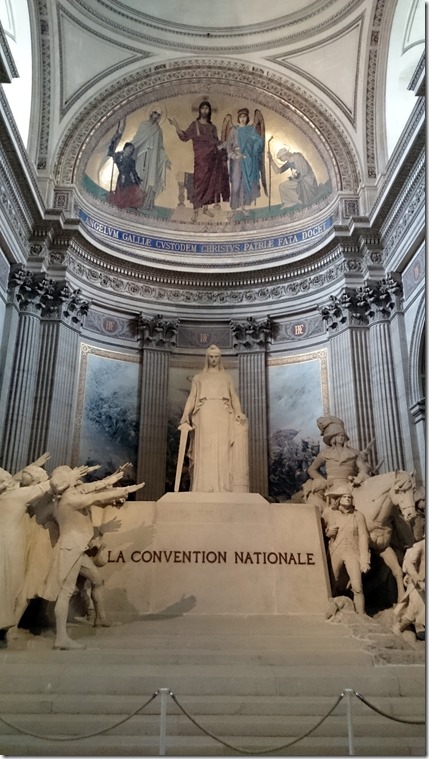 To tell us about the Pantheon is their official website:

The Pantheon Paris (Latin Pantheon, from Greek Pantheon, meaning "Every god") is a building in the Latin Quarter of Paris, France. It was originally built as a church dedicated to St. Genevieve, but after many changes now combines liturgical functions with its role as a famous burial place. It is an early example of Neoclassicism, with a facade modelled after the Pantheon in Rome surmounted by a dome that owes some of its character to Bramante’s "Tempietto".

Located in the 5th arrondissement on the Montagne Sainte-Geneviève, the Panthéon looks out over all of Paris. Its architect, Jacques-Germain Soufflot, had the intention of combining the lightness and brightness of the gothic cathedral with classical principles. Soufflot died before his work was achieved, and his plans were not entirely followed. The transparency he had planned for his masterpiece was not attained. Nevertheless, it is one of the most important architectural achievements of its time and the first great neoclassical monument.

As with most famed buildings, the Pantheon Paris has its unique story. The reason the it was was built was to replace the damaged Sainte-Genevieve church under the orders of Louis XV who was putting this monument up as a gratitude to God after his health had recovered. Soufflot was chosen for accomplishing the task. He wanted to have the Gothic style combined with the classical structure. Because of financial problems, Soufflot could not finish the building during his life; he died before seeing it completed and his pupil who finished it, did not exactly have the same ideas of his master and made some changes. However there is little doubt that this building is one of the greatest neoclassical monuments and a true masterpiece.

Shortly after the Pantheon was built (which was called back then the Sainte-Genevieve Church), came the French Revolution. It was then when the Revolutionist government changed the church into a mausoleum, a place to burry exceptional Frenchmen who had sacrificed their lives for their country or who had done something great for France. The Pantheon flipped back and forth to a church over the years but eventually assumed its lasting role as a burial place for martyrs and brilliant French citizens for good.

The sight that this building offers is quite fantastic. You can see literally see almost all of Paris. The inside architecture is visually amazing: it has the Gothic decorations combined with the mainly classical style of the building, creating such an admirable neoclassical monument. The Pantheon is a must-see when you visit Paris, both because of the imposing architecture it has and in respect to the people that made the world a better place.

I agree, this is a must-see.

Down the stairs going underground, you’ll find the crypt where all the great French minds are buried… 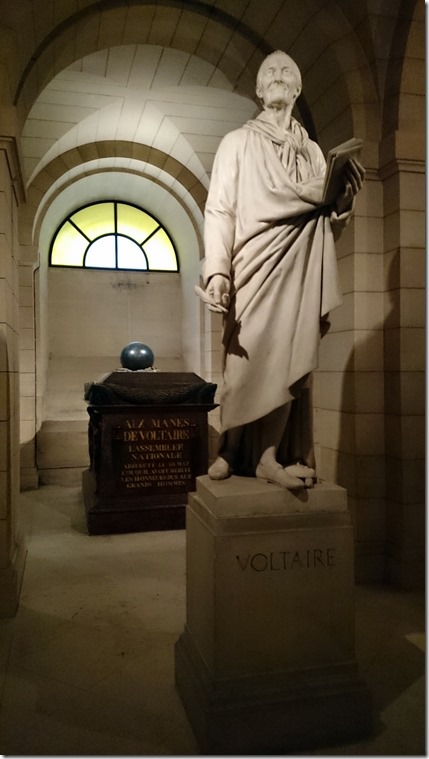 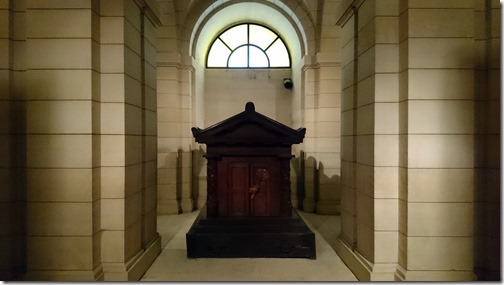 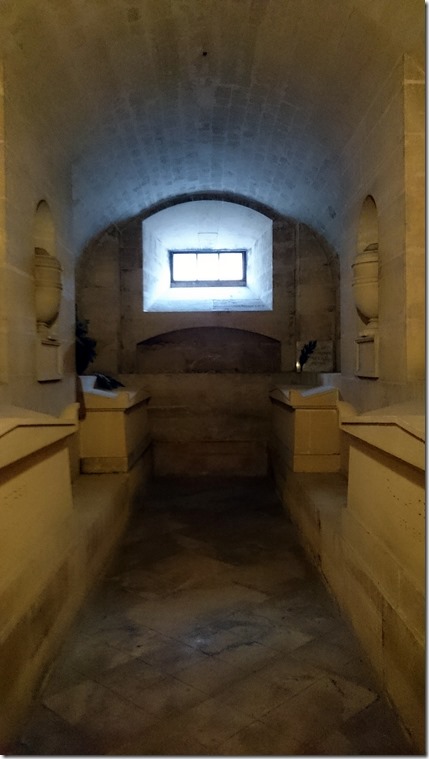 Outside the Pantheon, BTW, I was surprised to find an old friend from China (see him in my visit to 798 here)… 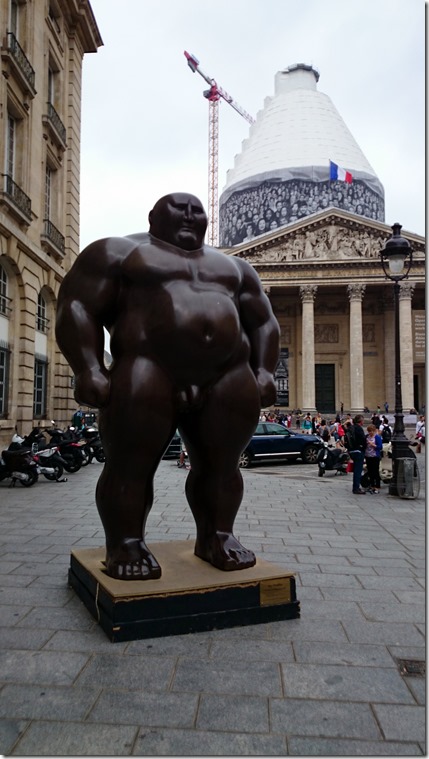 Try and make time for this when visiting Paris.