I’m a sucker for Taoist/Buddhist temples. The stranger they are, the more confusing, bizarre and obscure, the more I enjoy them. Back in Taiwan I spent countless hours wondering between endless colorful and lively temples I had absolutely no idea what they were about and loved every second. Hong Kong has its own fair share of temples, and it’s always a pleasure finding a gorgeous one tucked away where you usually don’t expect it.

Man Mo Temple, a few minutes from SoHo towards Sheung Wan, is one of those little wonderful temple surprises well worth your stopover when you’re wondering around Hollywood and Cat street looking for Chinese antiques and souvenirs. 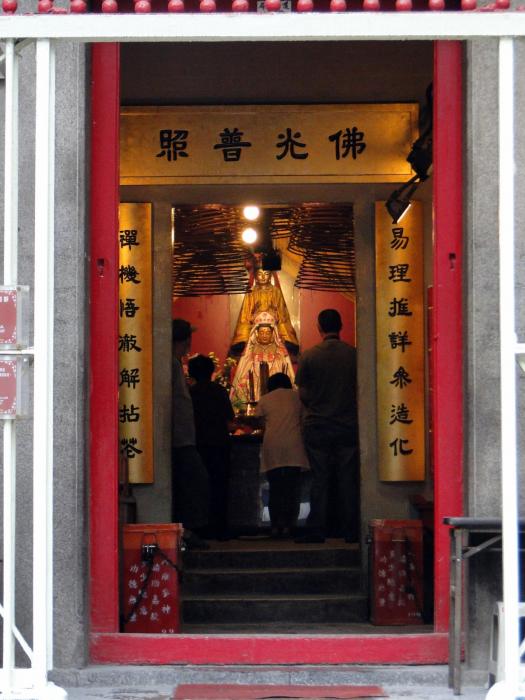 Why is that I feel so comfortable with eastern religions while having grown distant from western monotheistic ones? I could probably babble about that for hours, but a recent book I read by A.B. Yehoshua called "Friendly Fire" that I found – strangely enough  – in a small bookshop in the Philippines, has one wonderful paragraph that offers an explanation I can relate to . Referring to a Pagan African, the solitary Israeli disconnecting from his own culture explains:

This woman helps me peel off my identity. […] She is a genuine animist, a pagan who believes in trees and stones and spirits, not as a confused appendage to some failed abstract religion and not as a cry for help out of weakness and despair, but as a natural act, a whole different faith. And therefore, unlike Christians or Muslims, she has no connection or commitment to Jews, for either good or ill, love or hate. We are not the source she comes from, or a cause for struggle or competition. To her we are simply not relevant, nor does she see herself as relevant to us. To me she is a place where we do not exist in any memories. Not religious, not historical, not mythological. To her I am only a a man – admittedly white, but that’s a minor details […] And therefore, without talk or effort, simply as one person to another, she helps me peel away my identity […] Everything that has oppressed me begins to fall off, without argument or debate […] (p. 120 in paperback)

This Man Mo Temple, is for the worship of the civil and literature god Man Tai and the martial god Mo Tai, very relevant gods to me as an academic aiming to excel in study and civil service.

Wikipedia has a good intro on this one :

The largest Man Mo Temple in Hong Kong is located at Nos. 124-126 Hollywood Road, in Sheung Wan. It was built in 1847. It is part of a complex that comprises three adjacent blocks namely Man Mo Temple, Lit Shing Temple (No. 128 Hollywood Road) and Kung So.

The Man Mo Temple, the main building of the complex, is dedicated to the civil god Man Cheong and the martial god Kwan Ti. Lit Shing Kung (列聖宫) is for the worship of all heavenly gods.

Kung So (公所), to its west, was an assembly hall where community affairs and disputes were settled.

If you ponder about it for a second, 1847 is just around the time the British took over, and this makes the temple probably the oldest temple on HK island. 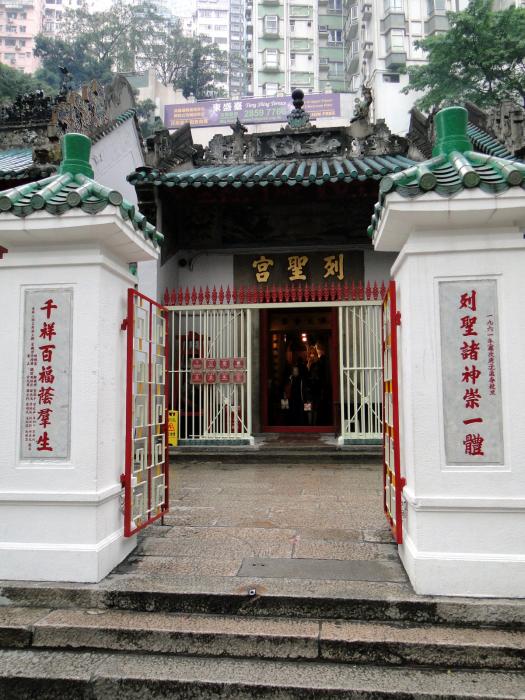 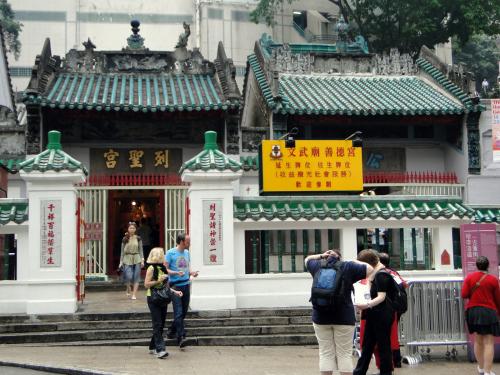 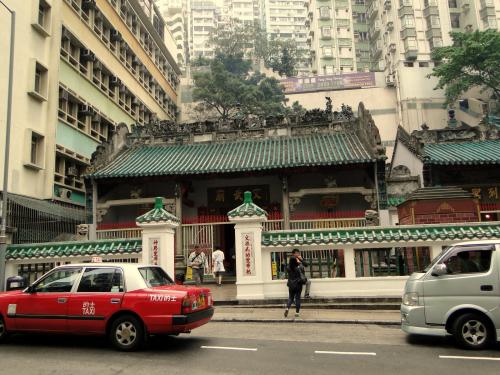 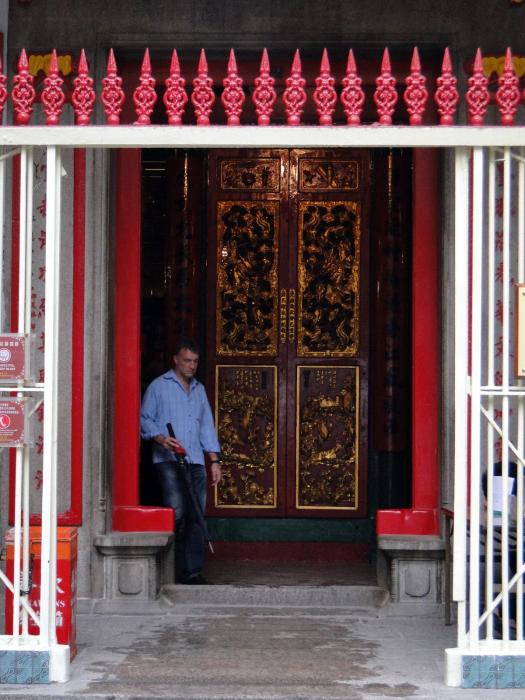 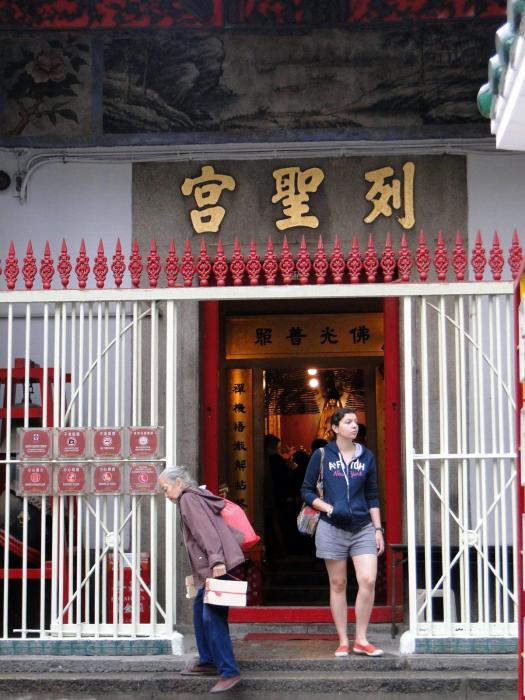 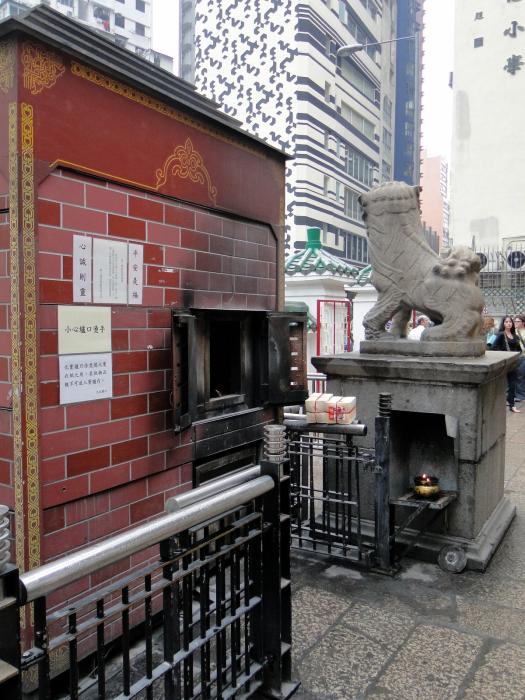 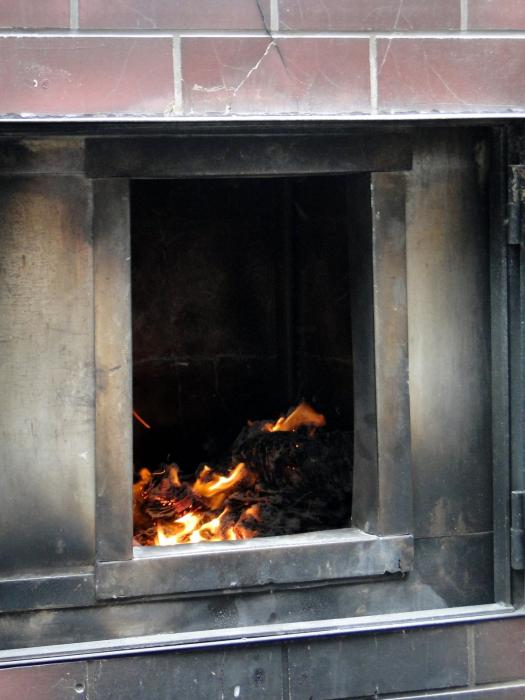 And explore a bit inside… 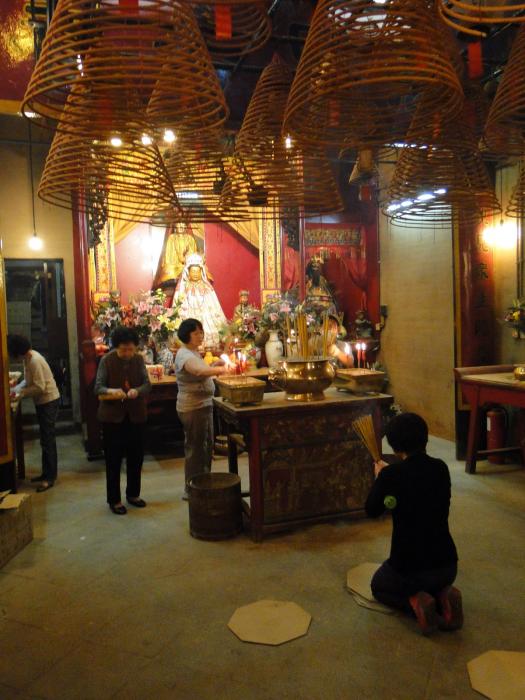 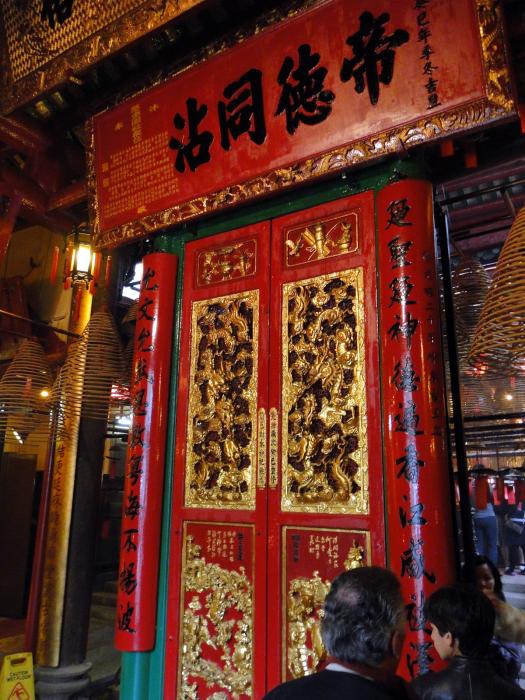 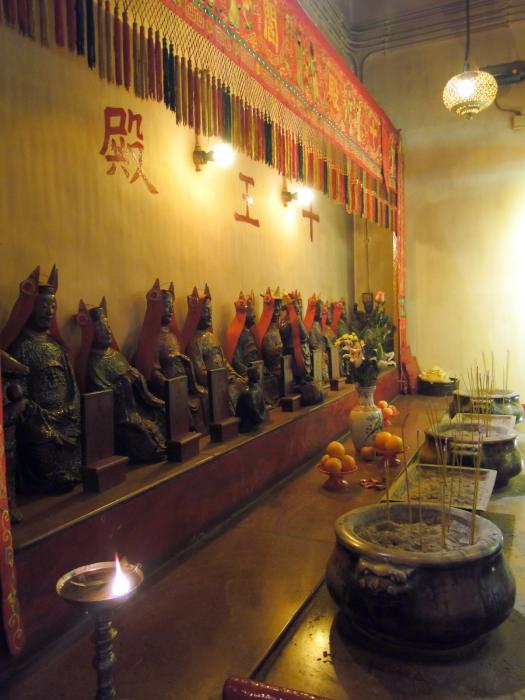 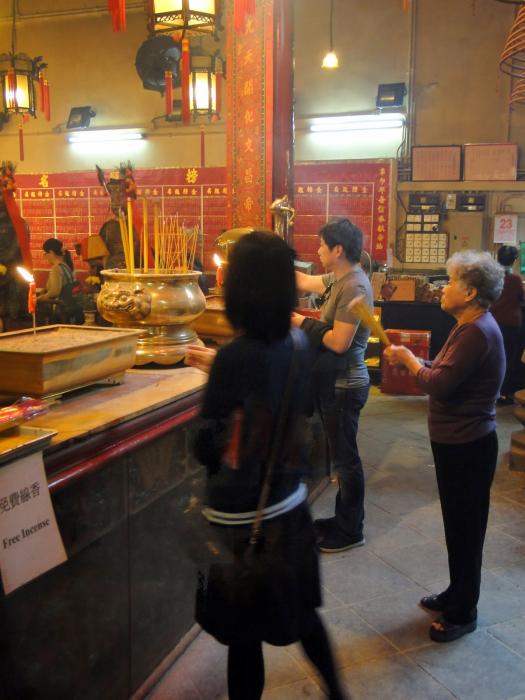 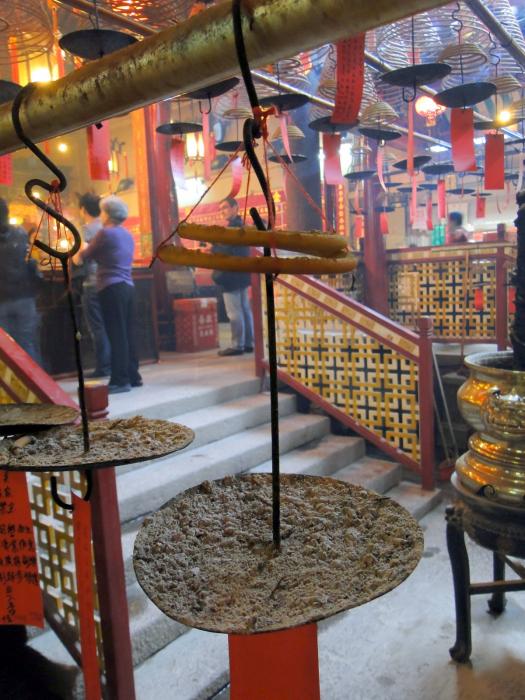 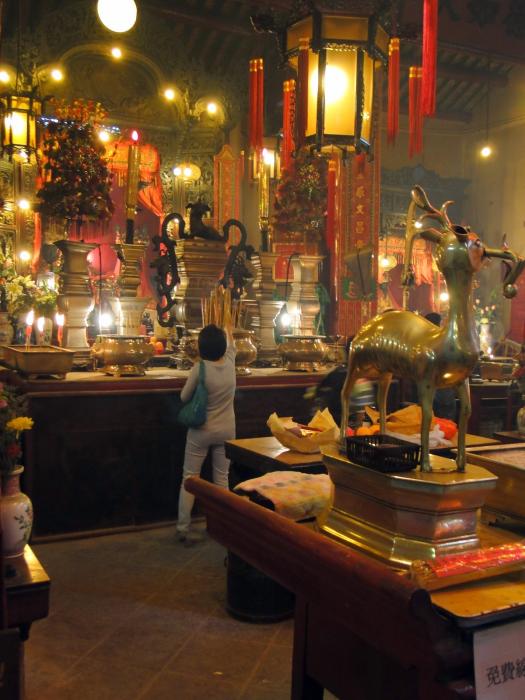 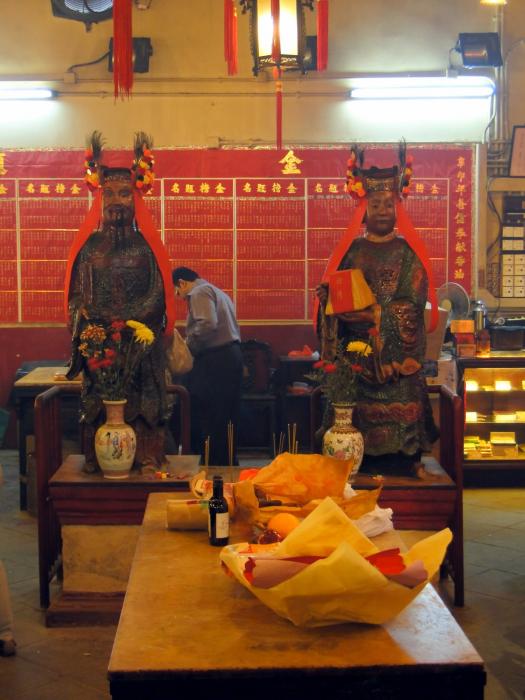 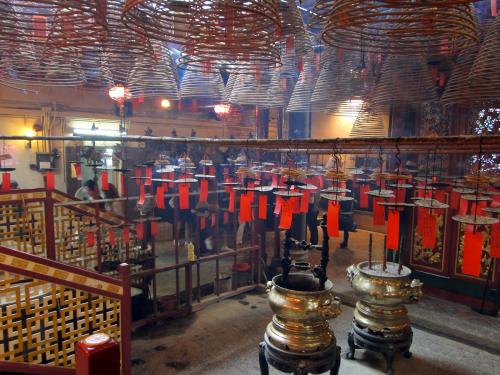 At the entrance, most of the time, are free student tour-guides through the wonderful Young Ambassador program, who can tell you about both the history of the place and the religion and worship. 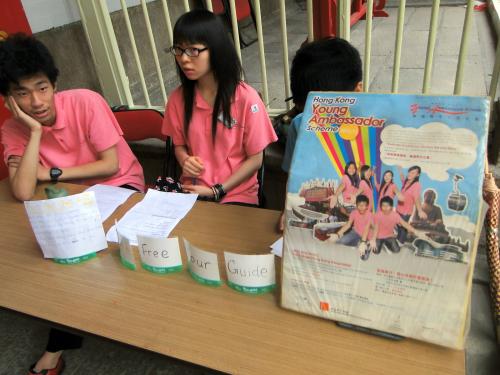 To get here, goto Sheung Wan MTR station, exit A2.

Want to know more about Man Mo Temple? Check out the following: