This was, by far, the strangest cultural experience I’ve had while visiting Mexico City. I knew nothing about this Lucha Libre and had no idea what to expect, but the hour or so at the Arena Coliseo with masked chubby Mexican wrestlers and the very enthusiastic local Mexican crowd turned out to be a night to remember.

These arenas are all over Mexico City, but most of them – like Arena Coliseo – are at the dodgy parts of town and so you’re well advised to either go with locals (who supposedly know what they’re doing) or get a taxi right up to arena doors. Although the Arena Coliseo is maybe 15 minutes walk from the historic district, I’d strongly advise against walking the distance, even during daytime. Anyhow, for something like 30-40 pesos you get a seat for the whole performance up in the balcony, where you’ll have grand views of folks pretending to hurt each other with all kinds of strange acting and flying, while the crowd is making an almost unbearable noise. It looks like there are absolutely no rules, funky WWF S&M clothing style. It’s just sheer madness. 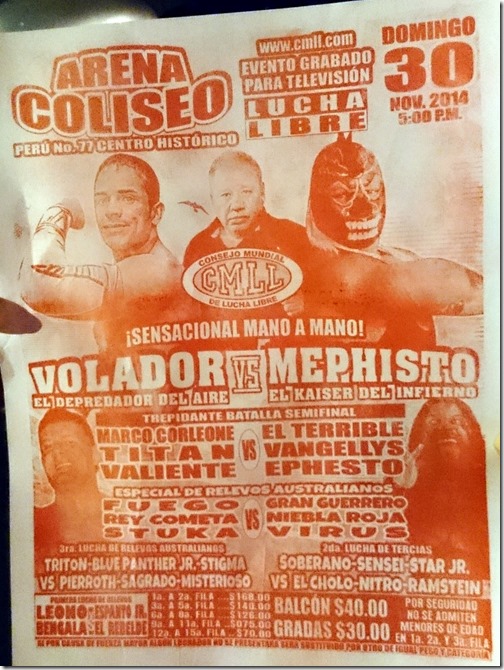 Want to get a feel of things? I’ve got a video for you…

It’s an interesting cultural phenomenon, and no psychology degrees will ever help me understand why people enjoy these things. The crowd reactions to the obviously fake fights are funny as hell.

Lucha libre (Spanish pronunciation: [ˈlutʃa ˈlibɾe], meaning "free wrestling") is a term used in Mexico, and other Spanish-speaking countries, for a form of professional wrestling that has developed within those countries. Although the term nowadays refers exclusively to professional wrestling, it was originally used in the same style as the English term "freestyle wrestling", referring to an amateur wrestling style without the restrictions of Greco-Roman wrestling.

Mexican wrestling is characterized by colorful masks, rapid sequences of holds and maneuvers, as well as "high-flying" maneuvers, some of which have been adopted in the United States. The wearing of masks has developed special significance, and matches are sometimes contested in which the loser must permanently remove his mask, which is a wager with a high degree of weight attached. Tag team wrestling is especially prevalent in lucha libre, particularly matches with three-member teams, called trios.

Lucha libre wrestlers are known as luchadores (singular luchador) ("wrestler(s)"). They usually come from extended wrestling families who form their own stables. One such line integrated to the United States professional wrestling scene is Los Guerreros.

Lucha libre has also transcended the language barrier to some extent as evidenced by works such as Los Luchadores, ¡Mucha Lucha!, and Nacho Libre. It also appears in other pop culture such as mainstream advertising: In Canada Telus’ Koodo Mobile Post Paid cell service uses a cartoon lucha libre wrestler as its spokesperson/mascot.

About the arena (Wiki):

Arena Coliseo is an indoor arena in Mexico City, Mexico located at República del Perú 77 in the Cuauhtémoc borough. The arena is primarily used for professional wrestling, or Lucha libre, shows promoted by Consejo Mundial de Lucha Libre (CMLL) and served as the promotion’s main venue from 1943 until 1956.. The building is nicknamed "the Lagunilla Funnel" . Arena Coliseo has a seating capacity of 16,500 when configured for professional wrestling or boxing events. The current building was completed in 1943, build by Salvador Lutteroth, founder and owner of CMLL and served as the main venue for CMLL from 1943 until 1953 when Arena México was completed and became the main venue for Lutteroth’s promotion.

I saw 4 different ‘battles’ with varying number of people on stage, and I came in maybe half way through. I think the whole event goes on for 2-3 hours, and if you seat up front you’ll even get to interact with the wrestlers and enjoy the wonders of the local beauties modeling the event up close in person. 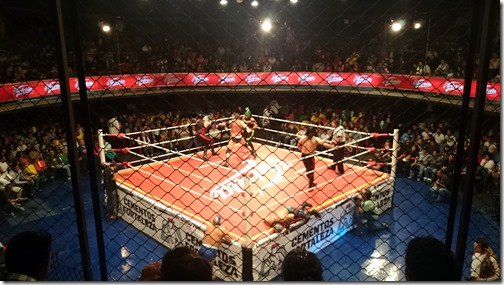 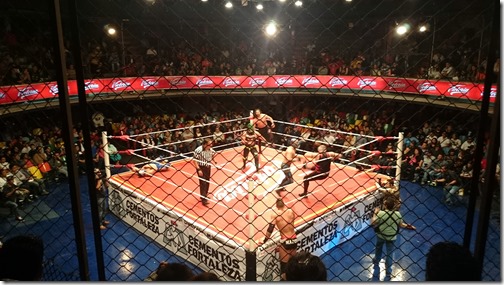 In my humble opinion, an experience not to be missed. Find your arena when you’re visiting Mexico City.