One of the houses in Jerusalem’s Talbia has a special story. In one of my recent visits to Jerusalem there was an artist event happening at the former Hansen Hospital, commonly known across Jerusalem as the “Lepers’ Home”. Established in order to serve people suffering from Hansen’s (leprosy) the establishment now stands as a museum telling its unique story, sometimes hosting special artistic events. 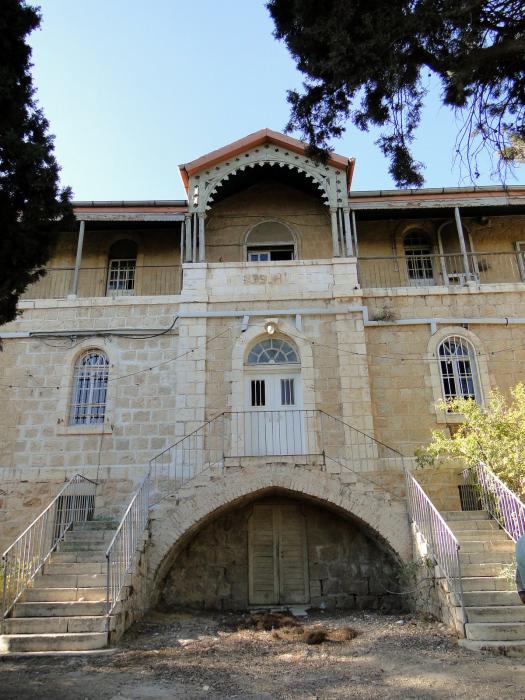 The Jerusalem municipality website introduces the history of the house:

Situated in what today is one of Jerusalem’s most affluent neighborhoods is an architectural treasure: the Hansen Hospital. […]

Established in 1887 by the city’s Protestant community as the Jesus Hilfe Asyl (Jesus Help Asylum), it was designed by Conrad Schick, a German missionary and self-taught architect. […]

Built to accommodate 60 patients with leprosy, the asylum was soon known as The Leper’s Home. It was thought of as a closed institution, but in fact patients were free to leave, and family members could come and visit. […]

In 1948, following the establishment of the State of Israel and the division of Jerusalem between Jordan and Israel, the asylum found itself on the Israeli side of the city. Some of the patients and staff left, moving to an asylum in the village of Silwan, east of Jerusalem. […]

With the development of an effective cure for leprosy, patients were gradually rehabilitated and discharged. The last in-patients left the hospital in 2000.

In April 2009 an historical and art exhibition named ”Behind the Wall” was opened within the hospital. It combines past and present and enables the visitor to experience the unique human and cultural story as well as gain an impression of its beautiful structure.

The Jerusalem Diaries has a bit more:

One of Jerusalem’s strangest and most beautiful old buildings. It’s decrepit now, but the Hansen Government Hospital for Lepers is still operated by the Ministry of Health as an oupatient treatment facility. Built in 1887 by architect Conrad Schick, a German missionary who planned and built many grand Jerusalem buildings, the compound sits on acres of some of the most expensive real estate in the city. The arched windows and elegant balconies look over 2 acres of gardens surrounded by an aging 7 foot high brick wall. Rivka Regev, the daughter of the only permanent residents of the house–a 92 year old doctor and his wife, who once ministered to the patients there–is trying to resurrect the garden behind the locked green gate with the help of local volunteers.

During that special day, the citizens of Jerusalem were invited to come in and take part in all sorts of artistic events. Somehow, I wasn’t that much into that, but it was my first time to actually enter the establishment and walk around. There’s no doubt it has a grand interior and is somewhat able to give the feeling of what it might have been like back in the days when it was still active. 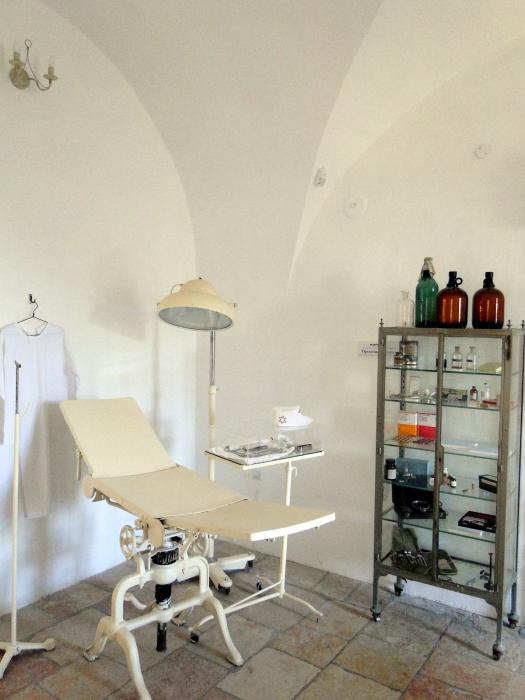 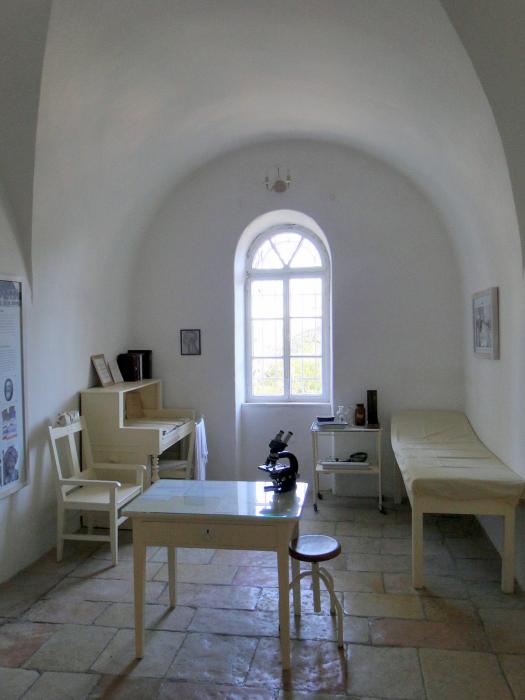 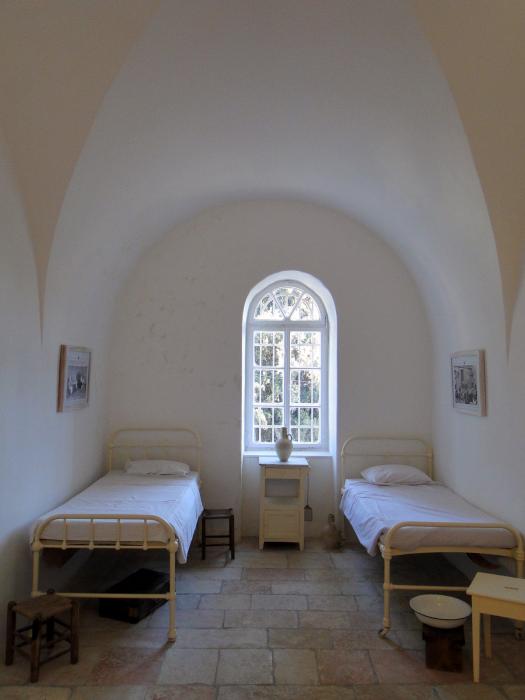 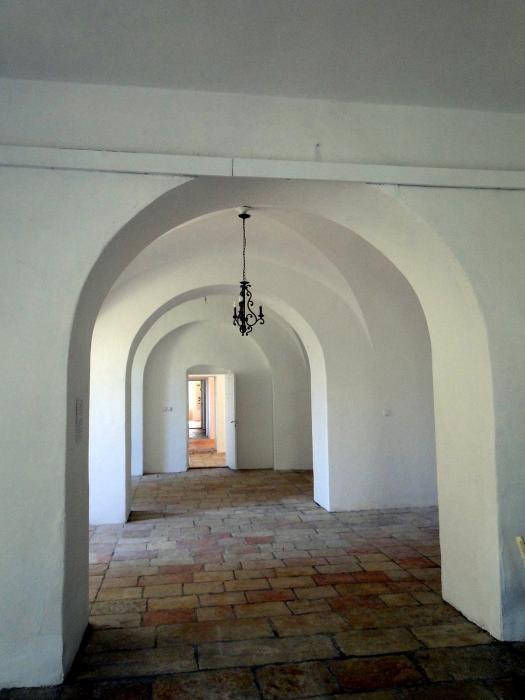 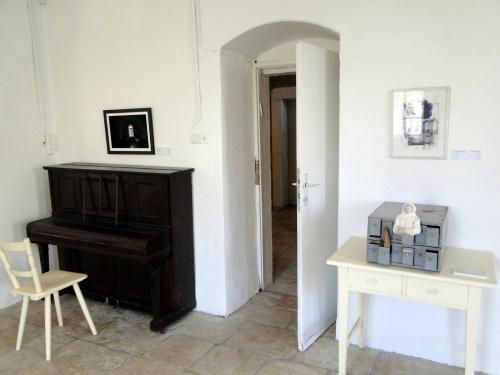 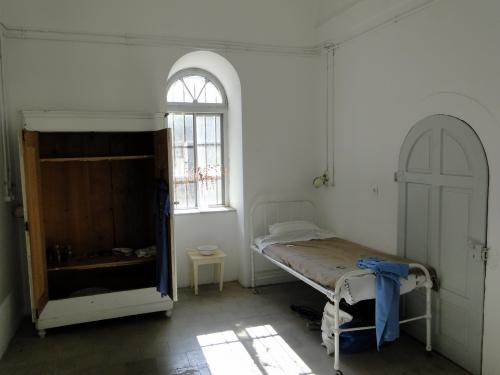 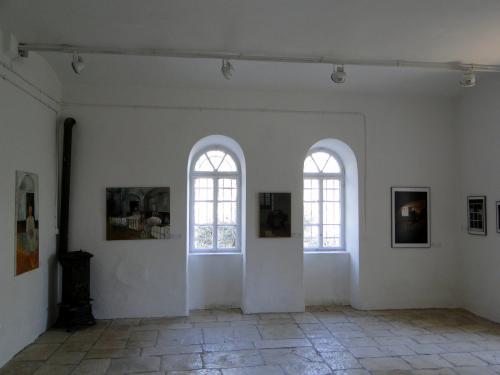 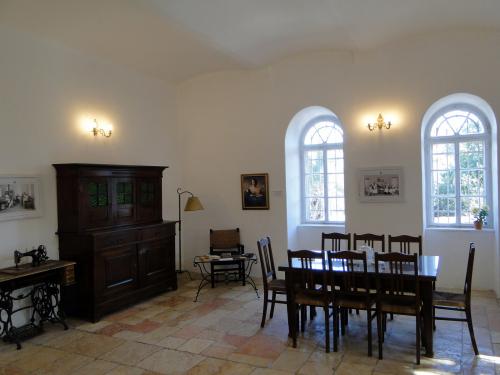 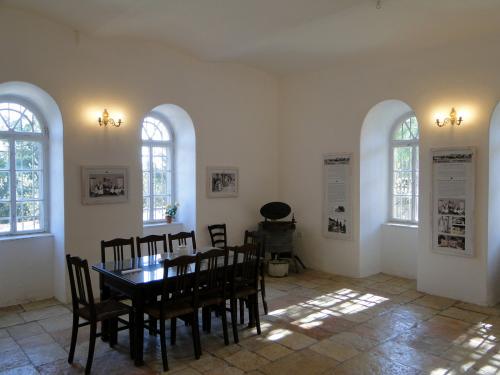 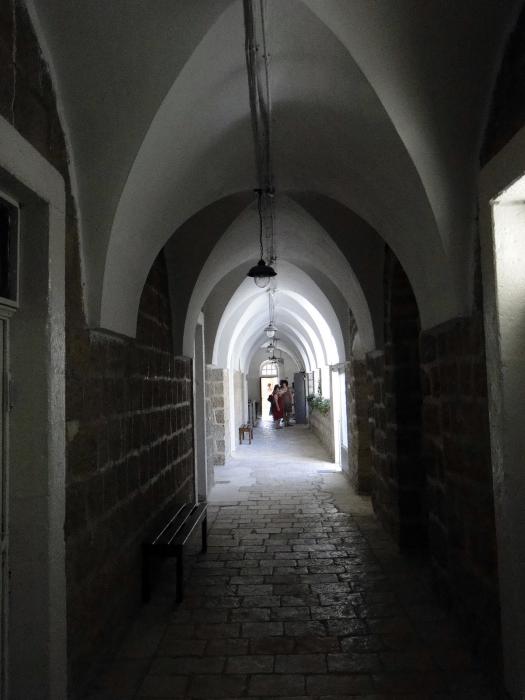 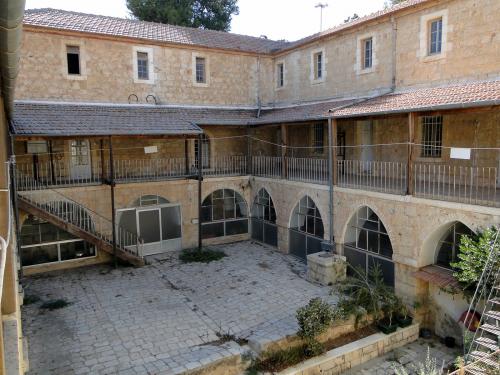 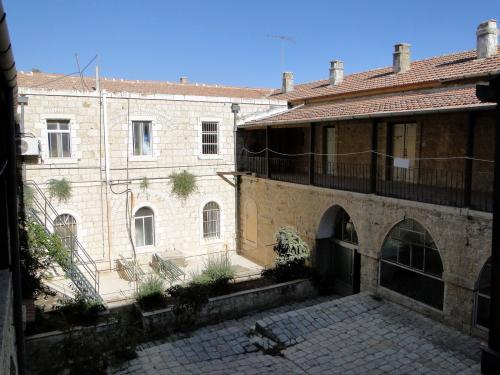 Gorgeous, isn’t it? Outside the house, artists kept doing all sorts of strange things that I could not really understand. Here are a few snapshots of some of what took place. 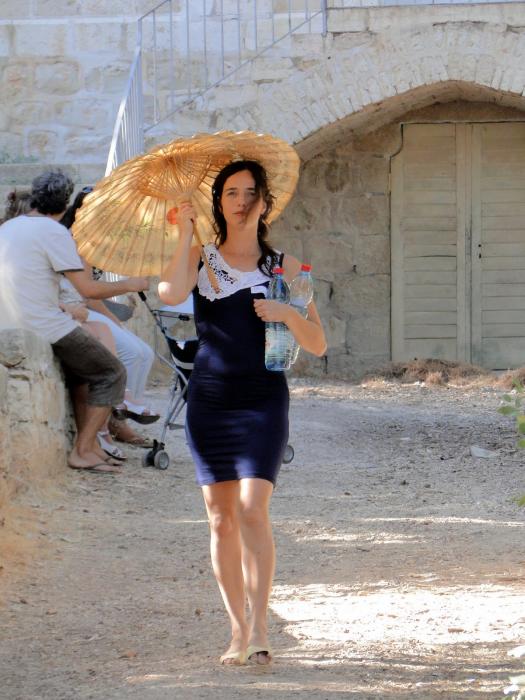 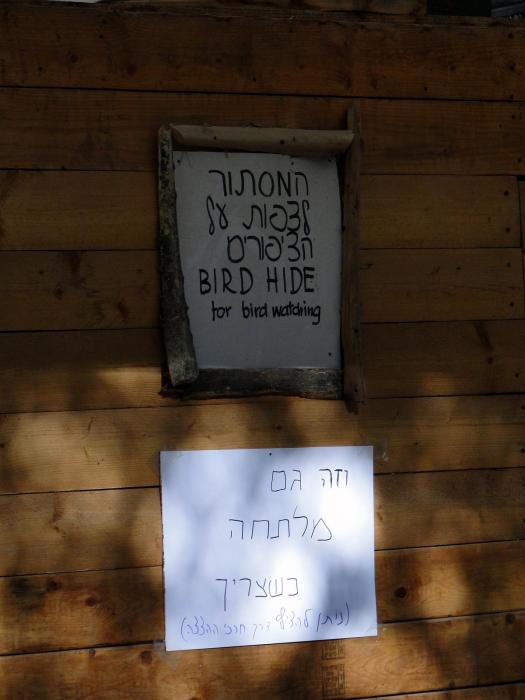 [the sign read – “Bird hide, for birth watching” and in Hebrew – “and it’s also a place to change clothes (and you can have a peek through the cracks)] 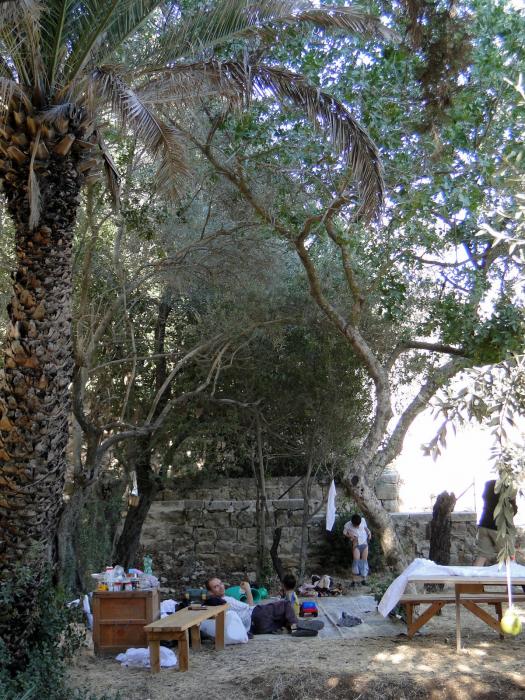 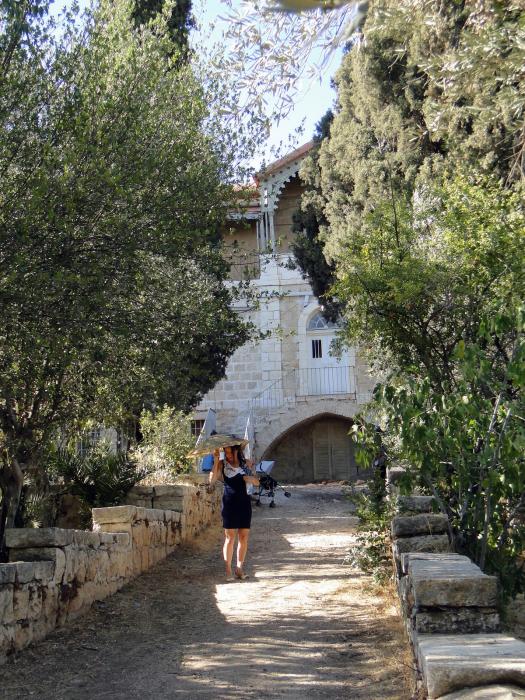 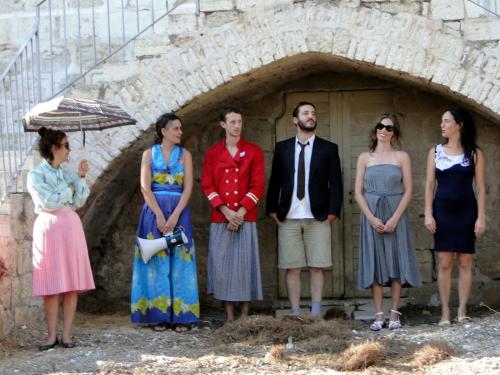 Not much to tell, it was just very strange. Artists, go figure.

In you’re in the neighborhood, consider having a look.

Nice.. There are also some similar art events, and Hansen diseases related sites near the neighbor hood where im living — ‘ Lo-sheng’ the site is around 70 years old.

Chloris – yeah, I think I might have heard about that area 😛

Talbieh includes the President’s official residence (though some would place it in Rechavia), the Islamic Art Museum and the Jerusalem Theatre. I chose this picture of the Jerusalem Theatre taken at night during an event to point out the main drawback of living next to a major cultural center. The parking situation is a bit of a joke, people park on traffic islands, sidewalks, anywhere they can fit the car. Yet the sidewalk I’m standing on to take the picture is in front of a multi-million dollar home.