Although I’ve lived in Jerusalem most of my life there’s still so much about this city that I know nothing about. Ever since I took first took interest in exploring Jerusalem a few years ago I keep discovering something new about Jerusalem almost weekly.

This Saturday it was the Rockefeller museum, north of the old city in what’s considered “East Jerusalem”. For the life of me, I can’t understand why such a jewel, a truly impressive museum – world standards, stands deserted and unvisited by both locals and tourists. The Museum of Israel in western Jerusalem that took over the operation doesn’t even bother with the place much any more – admission is free, the treasurer works part-time and even the free bus rides to the museum from the Museum of Israel twice a week to make the visitors feel more secure and comfortable does little to bring the place to life. I’ve heard the name of “The Rockefeller Museum” a few times growing up but it never connected to anything.

While I was walking the northern walls of the old city with my dad on the Saturday tour in what some people used to, and maybe still do, believe is a bit dangerous to the western looking visitor, my dad explained to me what the place is and we decided to walk over and take a look – decades after the last time my dad was there. We were both overwhelmed.

And what a museum it is. To get a sense of the place, take a look at the architecture …

Inside, some of the world’s oldest relics found in the area, dating back to 8000BCE, sorted by historical periods. 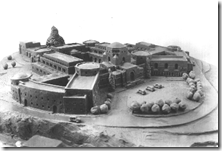 The Rockefeller Museum was built on the site of Karm el-Sheikh, named after the owner of property, Sheikh Muhammad al-Halili, Mufti of Jerusalem in the late 17th century. In 1711 al-Halili built his summer residence there. The house still stands today, west of the Museum.

Al-Halili’s two-story residence, known as Qasr el-Sheikh, was one of the first structures to be erected outside Jerusalem’s Old City walls. From this building, it was possible to keep a watchful eye on the surrounding olive grove and garden and enjoy the picturesque landscape. The first floor housed an olive press; the second floor was the residential story. 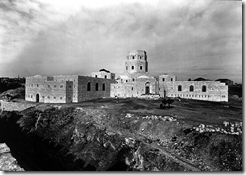 In 1906 the Jewish National Fund considered purchasing the site of Karm el-Sheikh for the Bezalel School of Art and Crafts. It had been the dream of the school’s founder, Boris Schatz, to establish a museum and university overlooking the Temple mount. This plan, however, never came to fruition. Thirteen years later, in 1919, the British Mandatory Government in Palestine selected the site for the construction of an archaeological museum. But it was only in 1930 that the British managed to purchase the plot, and another eight years would pass before the Museum opened its doors to the public.

I wish I could have taken photos inside. What a wonderful and sad surprise. It’s a tragedy, really, how so much of Jerusalem’s beauty is unknown and unvisited.