Just outside the old city walls overlooking the neighborhood of Abu-Tor is a Christian-Arab burial ground. In that place rests the person who became especially famous after Spielberg’s Oscar winning film “Schindler’s List”, Oskar Schindler, for rescuing Jews during the second world war Nazi rule. What looks a bit different , you’ll probably notice, is that the Christian grave is covered with stones – which stands for a Jewish practice of respect to the dead rarely seen in a Christian cemeteries. Shown in the last scene of Schindler’s List, the stones symbolize the Jewish appreciation for what he did. 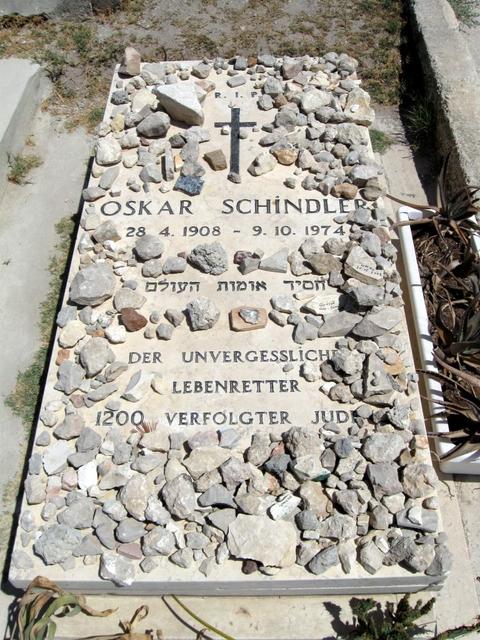 Steps away is Saint Peter in Gallicantu. Here’s the background story from the New Testament :

“Then seizing him [Jesus], they led him away and took him into the house of the high priest [Caiaphas]. Peter followed at a distance. . . .A servant girl . . . said, ‘This man was with him.’ But he denied it. ‘Woman, I don’t know him,’ he said. A little later someone else saw him and said, ‘You also are one of them.’ ‘Man, I am not!’ Peter replied. About an hour later another asserted, ‘Certainly this fellow was with him, for he is a Galilean.’ Peter replied, ‘Man, I don’t know what you’re talking about!’
Just as he was speaking, the rooster crowed.
The Lord turned and looked straight at Peter. Then Peter remembered the word the Lord had spoken to him: ‘Before the rooster crows today, you will disown me three times.’ And he went outside and wept bitterly.” (LUKE 22: 54-62)

I can’t say that I fully understand the whole story behind Peter’s sainthood, but I guess remorse goes a long way. Anyways, this is the story and how the rooster became the symbol of the place (notice the roof-top). 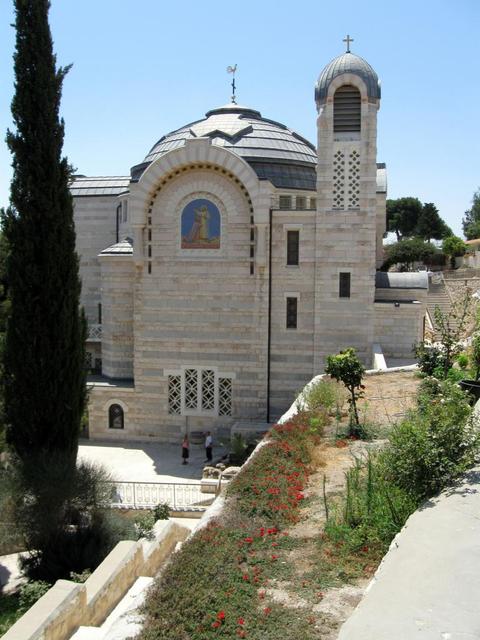 The church offers some spectacular views of Eastern-Jerusalem…

and there’s an interesting model of Jerusalem during 400-600AD, when the Romans reinvented the city to meet Roman standards.

Endless history, almost in every spot in Jerusalem.

Thanx Fili, it is really enjoyable to read about your home country. i hope i will make it there some day 🙂 Wonderful pics also.

Helen – thanks, that’s very sweet of you.
Good luck with the new flag.

I enjoyed photos of areas of Jerusalem seldom seen, such as the slopes of the city south of St. Peter in Gallicantu. It would help to have captions to some of these views, such as “Herodian house foundations with stairs”. Keep up the good work of bringing these “hidden” areas of Jerusalem to us.

Joyce – thanks. I take thousands of photos and just don’t have the time to insert captions, though you’re right – it would make a big difference.