This was, by far, the most insane fireworks display I’ve ever been in. 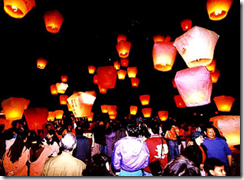 Tainan County’s been granted the Taiwanese national Lantern Festival, which is where I was planning to go for the holiday celebrations, but John brought to my attention that there are wilder stuff going on in Tainan County.

The number one is claimed to be the Yan Shui (/Yen Shuei /鹽水) Beehive Rocket Festival, better known for its annual firework casualties. When I mentioned to my Taiwanese friends going there most thought I was out of my mind. Going to the Tainan tourist information center to get some info on what’s happening and how I might get there, the girl at the desk asked me to promise her that I don’t go there “because very very dangerous, many many hospital”. But seeing some of the videos posted online about it (example), of firework rockets shot directly at crowds I wanted to have a look.

But… it was a bit too far away, and none of my Taiwanese friends would go, so I settled for a closer more organized clone at Qigu’s Luerman Shengmumiao temple (元宵節台南正統鹿耳門聖母廟). With a full helmet, an overcoat and towels to cover parts that might get hurt, I set to face the horrors of direct fireworks engagement. Here’s what it looked like from afar :

Fireworks were shot in every possible direction, starting upwards but then  directed at the crowd in all directions. All those standing close by, like me, were hit. There was no way not to, unless you’re standing behind a huge block.

John has a high resolution video with his new camera (I’m jealous!):

I got away with some flat-wounds on my back, ass and hands, which disappeared after a few hours. Some of those who didn’t come prepared and weren’t standing behind a good cover, were hit pretty badly, and the occasional ambulance would come by and pick’em up. Yet, I saw plenty of families with their children sitting behind a well-protected transparent shield and having the time of their lives.

The event was wrapped up with a more traditional display of fireworks that were up in the sky, running a competition between teams from all over the world. The Japanese took the title with some heart, Hello Kitty, and year-of-the-rat fireworks. I had no idea you can really do all that with fireworks…

wow~~what a pity, you should go to 鹽水 next time. you can take the train then take a bus there. 鹽水 itself is a small old town. And the beehive rocket could be best and most crazy allover the world. I have been there twice and want to go for a third time. So just equipped yourself well and you would be fine. As for the national lantern show this year in Tainan county, it’s the best all over these years. I took the THRSC from Taipei to Kaohsiung and see both Kaohsiung’s and Tainan’s lantern show. Both are pretty… Read more »