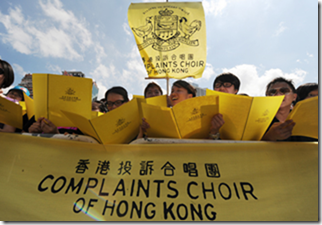 #HKProblems trend started by @HKProblems is freaking fantastic. Every time I read one of those tweets I can’t help but smile and hope someone’s documenting those pearls of wisdom.

Searching back in the last week, here are some of the wonderful Hong Kong problems we all love to complain about :

Would love to know who is behind @HKProblems.

But HK Problems isn’t alone. This actually follows a much longer world tradition of complaints through singing which made its way to Hong Kong with the Complaint Choir of Hong Kong. Here’s one of their wonderful complaints songs about Hong Kong:

Here’s the local news station on the local HK choir:

Hilarious. Someone should make one for Taiwan 🙂

To my surprises, most of the HK problems are related to MTR. I wonder why didn’t people say HK guys carrying their girlfriend’s purse.

Thanks, Jin. Do you happen to know who’s behind @HKProblems? would be happy to meet him/her.