Though Kinmen is a gorgeous little Taiwanese island, it’s mostly known for the cold war between Taiwan and China back in the days where the Communists and the Nationalists were planning to overtake one another. It’s a bit odd really, that Kinmen is so close to mainland China and so far away from Taiwan across the Taiwan strait, but if you want to hear the story of how that came to be and the fierce fighting that took place on the island by the local forces fending off the Communists, then head over to the War Museum on the north-western side of the island. Sure enough, it tells the tale from the Taiwanese side of the story, with some heavy pro Chiang-Kai-Shek and nationalist propaganda, but that’s not necessarily a bad thing. There’s still a lot to see and learn. 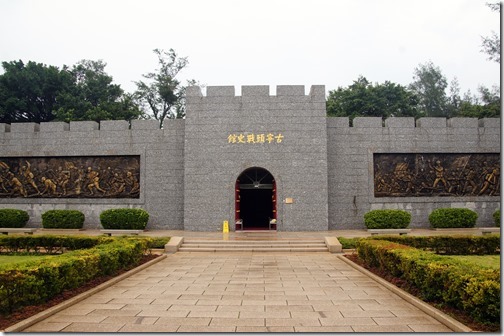 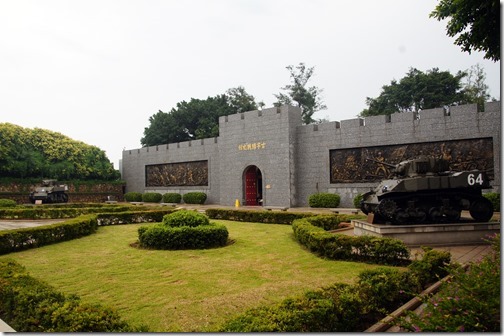 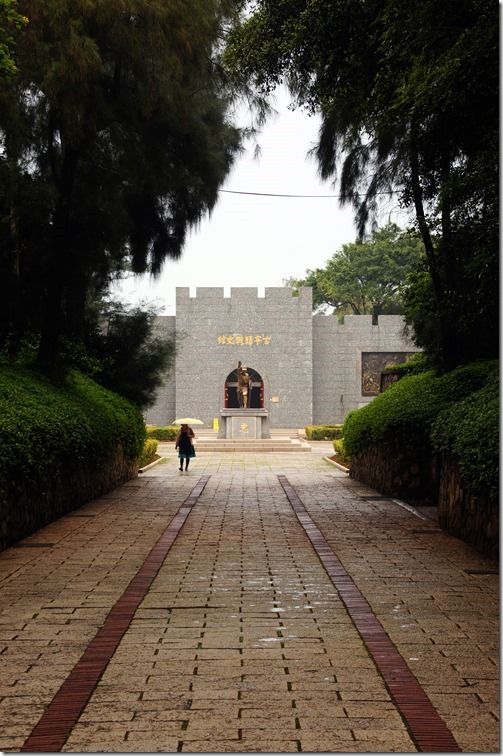 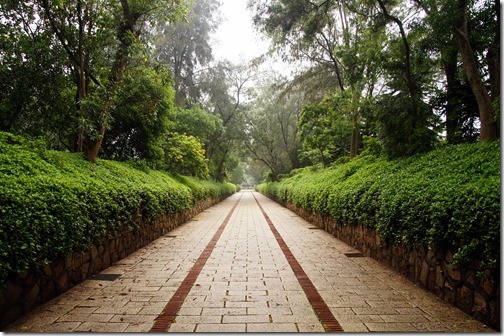 Once you enter, there’s help on the left. Ask them to watch the English intro movie, as it will give you a good overview of the whole story.

Curious about the Guning battle that left the island in Nationalist hands? Wikipedia has the background:

The Battle of Guningtou (simplified Chinese: 古宁頭之役; traditional Chinese: 古寧頭之役; pinyin: Gǔníngtóu zhī Yì), also known as the Battle of Kinmen (simplified Chinese: 金门战役; traditional Chinese: 金門戰役; pinyin: Jīnmén Zhànyì), was a battle fought over Kinmen (Quemoy) in the Taiwan Strait during the Chinese Civil War in 1949. The failure of the Communists to take the island left it in the hands of the Kuomintang (Nationalists) and crushed their chances of taking Taiwan to destroy the Nationalists completely in the war.

Following establishment of the People’s Republic of China on October 1, 1949, the government of the Republic of China under Chiang Kai-shek began withdrawing its forces from mainland China to Taiwan. However, ROC garrisons remained stationed on the islands of Quemoy and Matsu, located off the coast in Fujian Province. Commanders of the PRC People’s Liberation Army (PLA) believed that Quemoy and Matsu had to be taken before a final assault on Taiwan. The PLA planned to attack Quemoy by launching a first attack with 9,000 troops to establish a beachhead, before landing a second force of roughly 10,000 on Greater Quemoy Island, expecting to take the entire island in three days from an ROC garrison not expected to be larger than two divisions. The Communists had incorrectly estimated that there were only 12,000 Nationalist soldiers on the entire island–a calculation that would contribute to their calamitous defeat. Expecting that a PLA attack was imminent, ROC commanders ordered the immediate construction of various fortifications. By October, ROC troops had laid 7,455 land mines, and constructed roughly 200 earthen bunkers on the shores of Quemoy, as well as several anti-amphibious landing beach obstacles. The ROC garrison on Quemoy was also reinforced with more armor, troops and supplies.[1] In the opening hours of October 25, the PLA’s armada (consisting of hundreds of wooden fishing boats and junks) set sail for Kinmen. They intended to land near the village of Longkou on the narrowest part of the island. But due to the crudeness of their craft, choppy waters and winds (which caused seasickness to some troops), many of them were scattered and carried past Longkou and northwestwards toward the shore of Guningtou instead.

After 3 assaults during 3 days of fighting, the Chinese finally gave up.

Having watched the movie, you’re now all set for the battle plans and the glory of the savior Chiang Kai-Shek… 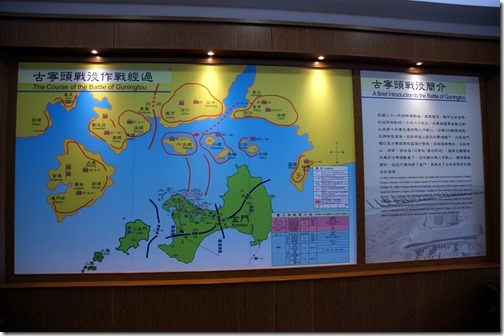 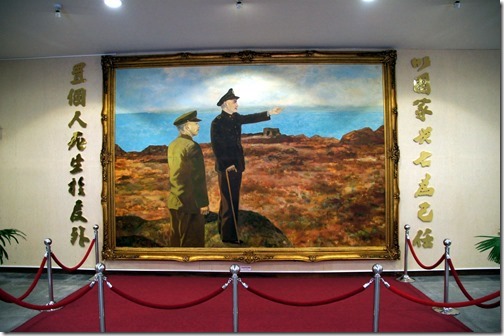 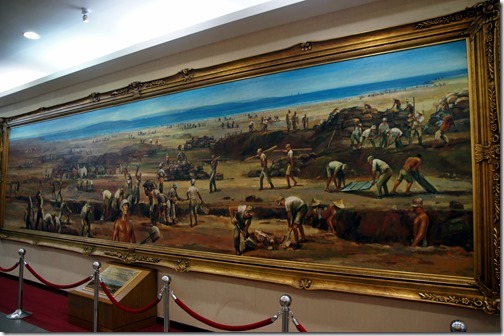 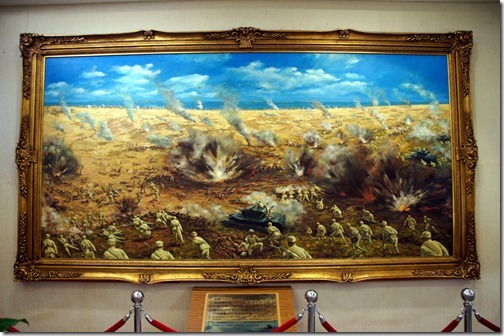 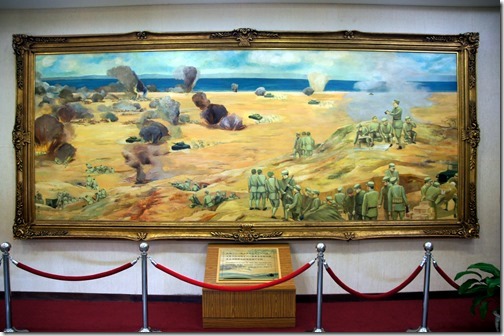 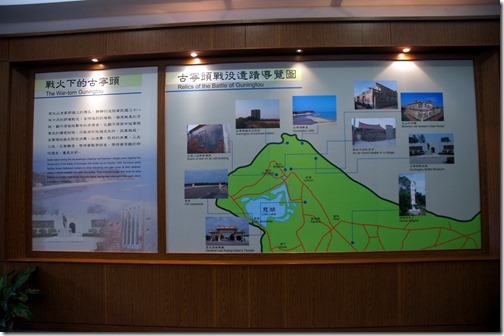 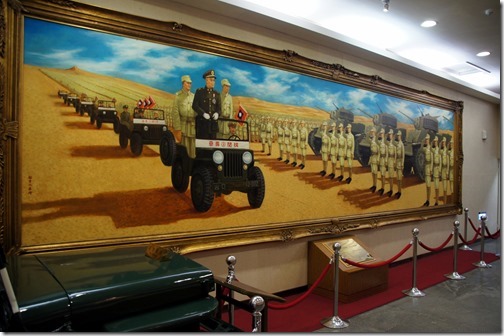 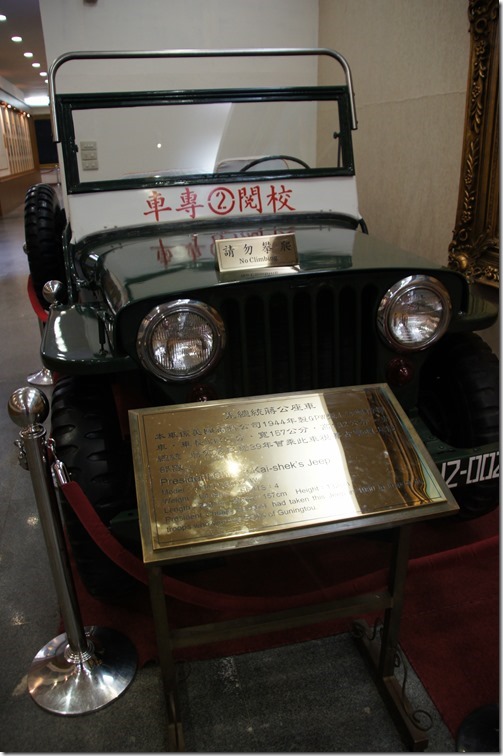 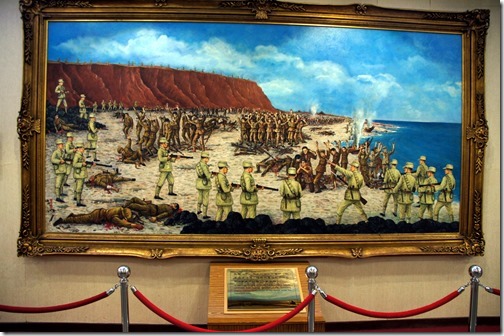 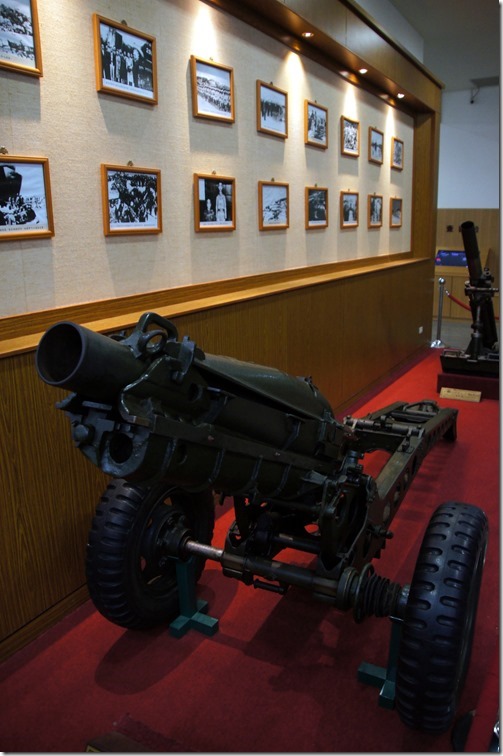 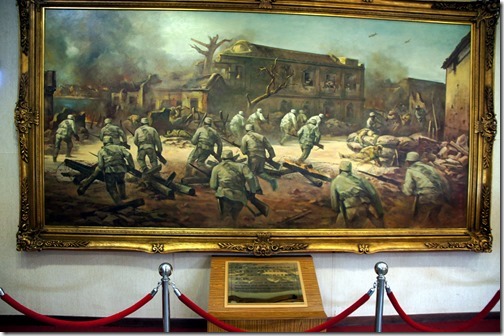 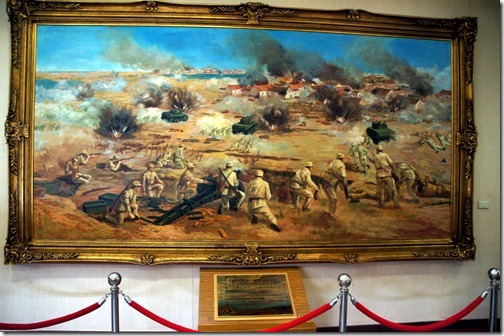 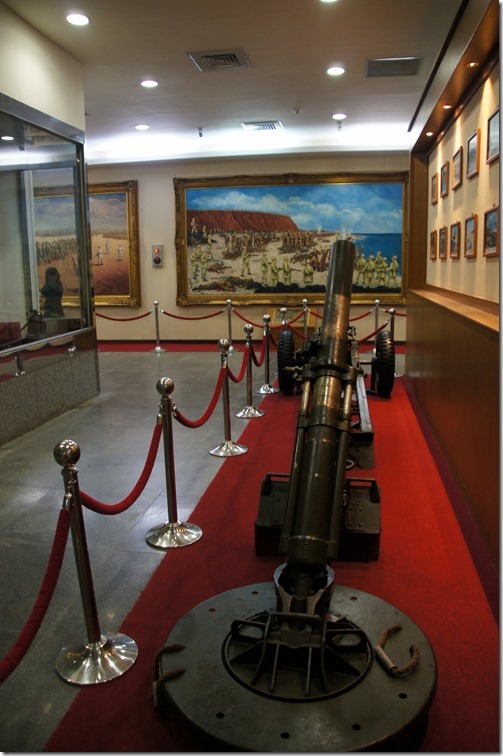 As you can see, it’s a combination of war scenes, paintings of people charging or Chiang Kai-Shek with his son, and a number of artifacts from the good old days.

This was a part of Taiwanese history I’ve always wondered about. Could never figure out why Kinmen and Matsu ended up in Taiwanese hands. This short visit to the war museum finally shed some light on all that.

If you’re into Taiwanese history, this would be a must stop.