Of all the temples I visited in Kyoto, the first and possibly the most impressive of them all was Fushimi Inari. Climbing up a 4km trail from ground level on the slopes of the Inari mountain, you’ll be awed by the beautiful orange toriis, the gorgeous wooden gates below, and the 32,000 little shrines around the temple campus. Up from the top, you’ll get panoramic views of the city of Kyoto and its many other temples. 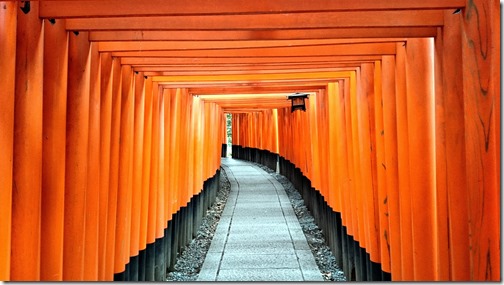 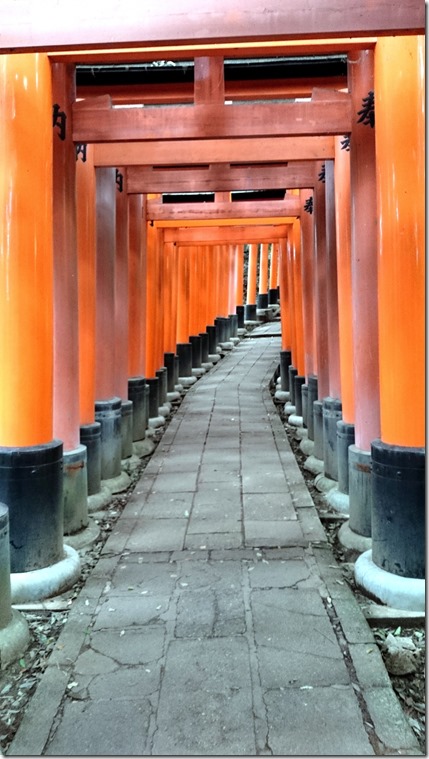 Fushimi Inari Shrine (伏見稲荷大社, Fushimi Inari Taisha) is an important Shinto shrine in southern Kyoto. It is famous for its thousands of vermilion torii gates, which straddle a network of trails behind its main buildings. The trails lead into the wooded forest of the sacred Mount Inari, which stands at 233 meters and belongs to the shrine grounds.

Fushimi Inari is the most important of several thousands of shrines dedicated to Inari, the Shinto god of rice. Foxes are thought to be Inari’s messengers, resulting in many fox statues across the shrine grounds. Fushimi Inari Shrine has ancient origins, predating the capital’s move to Kyoto in 794.

While the primary reason most foreign visitors come to Fushimi Inari Shrine is to explore the mountain trails, the shrine buildings themselves are also attractive and worth a visit. At the shrine’s entrance stands the Romon Gate, which was donated in 1589 by the famous leader Toyotomi Hideyoshi. Behind stands the shrine’s main building (Honden) and various auxiliary buildings.

At the very back of the shrine’s main grounds is the entrance to the torii gate covered hiking trail, which starts with two dense, parallel rows of gates called Senbon Torii (“thousands of torii gates”). The torii gates along the entire trail are donations by individuals and companies, and you will find the donator’s name and the date of the donation inscribed on the back of each gate. The cost starts around 400,000 yen for a small sized gate and increases to over one million yen for a large gate.

The hike to the summit of the mountain and back takes about 2-3 hours, however, visitors are free to walk just as far as they wish before turning back. Along the way, there are multiple smaller shrines with stacks of miniature torii gates that were donated by visitors with smaller budgets. There are also a few restaurants along the way, which offer locally themed dishes such as Inari Sushi and Kitsune Udon (“Fox Udon”), both featuring pieces of aburaage (fried tofu), said to be a favorite food of foxes.

After about a 30-45 minute ascent and a gradual decrease in the density of torii gates, visitors will reach the Yotsutsuji intersection roughly half way up the mountain, where some nice views over Kyoto can be enjoyed, and the trail splits into a circular route to the summit. Many hikers only venture as far as here, as the trails do not offer much variation beyond this point and the gate density decreases further.

So, let’s climb up the mountain through the countless toriis… 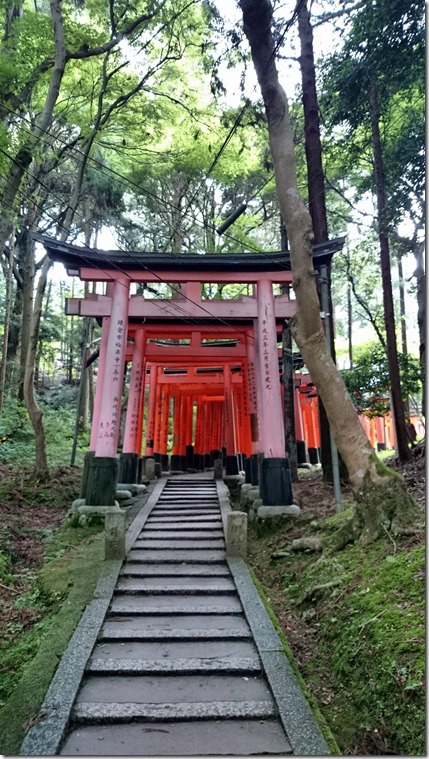 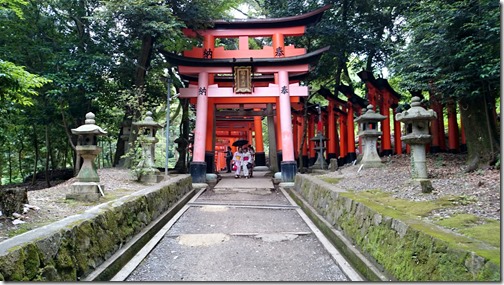 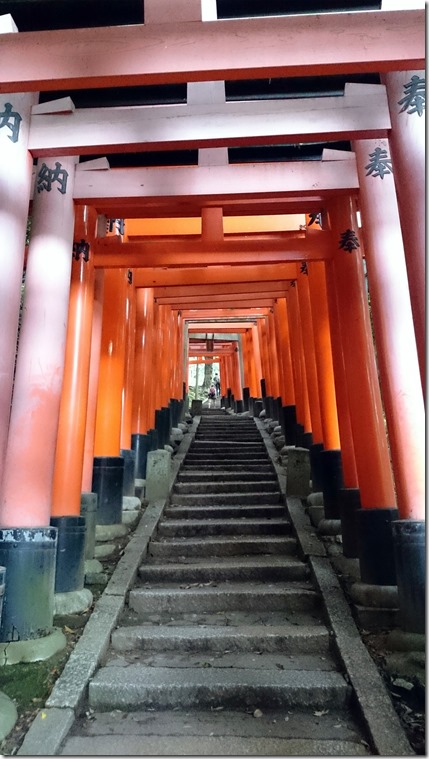 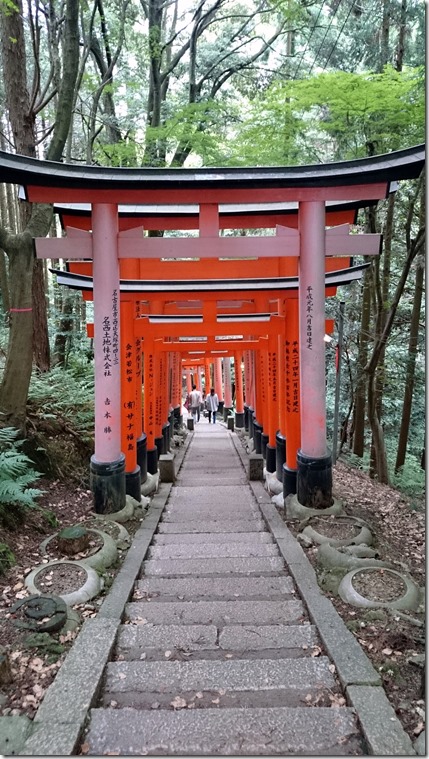 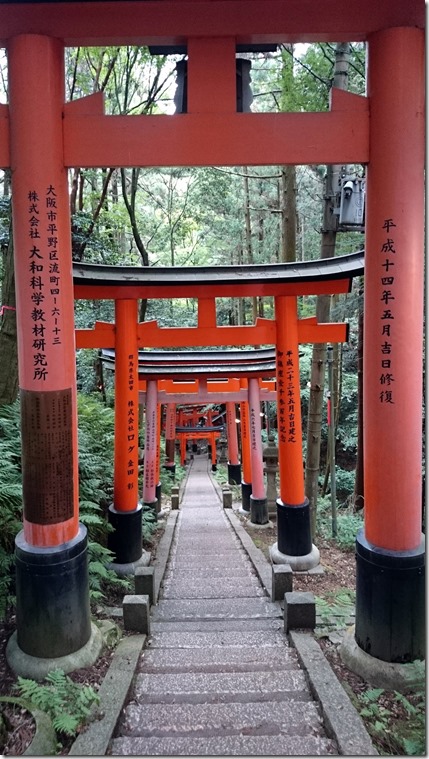 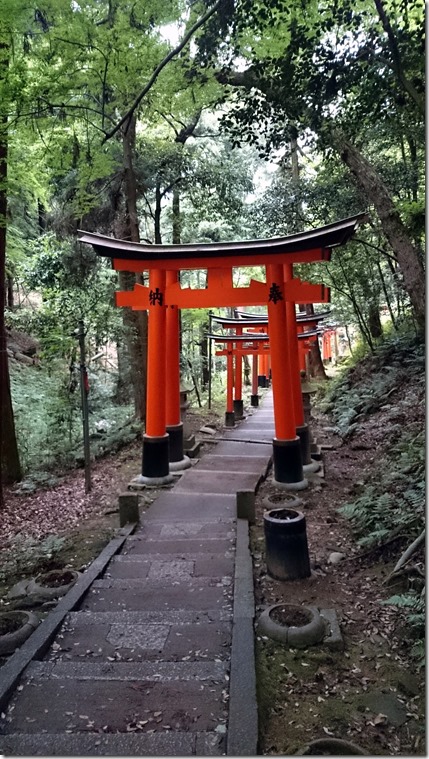 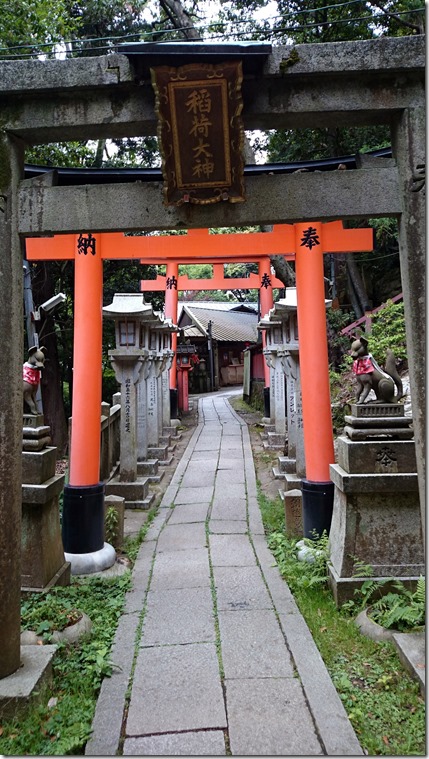 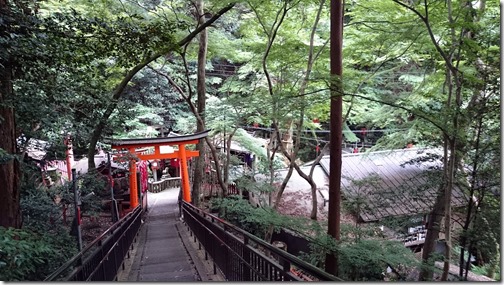 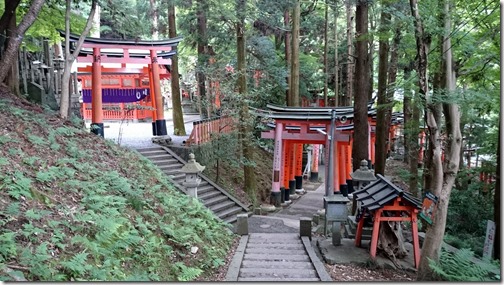 The forest is very picturesque, and although it’s a tough climb, many Japanese visitors make it in their traditional Kimono clothing, making some truly unique photo opportunities.

More on the small shrines of Fushimi Inari to follow…

Start your temple tour here and make your way up north to explore more temples and the ancient Gion area.