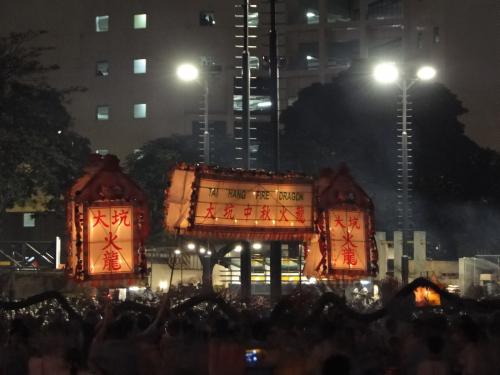 The Hong Kong Government’s Festive Hong Kong 2010 had an invitation you can not reject :

The three-day event commemorates a series of mishaps that befell Tai Hang in 1880 culminating in a plague breaking out in this small Hakka village. Appearing in the dream of a village elder, Buddha instructed the villagers to light firecrackers and perform a fire dragon dance for three days and nights during the Mid-Autumn Festival. The plague ended after the event. Since then, the ritual has been repeated annually and passed down from generation to generation. Application has been submitted for this cultural activity to be inscribed on the third national list of Intangible Cultural Heritage in China for its outstanding historical and cultural value. This Fire Dragon Dance, unique to Hong Kong, is representative in illustrating the creativity of Chinese Culture.

Wanna have a look? In this next video I took the Fire Dragon enters Victoria Park for a round of local applause and excitement.

Here are some more videos from others more much closer:

Cute Dragon! I would like to see such a ceremony. Next year I am going to South Korea, then, the year after, I would choose Hong Kong as my next destination.

Great videos! What I love about Hong Kong is that they have concrete plans to attract tourists with these amazing cultural celebrations. Hopefully I can go back to Hong Kong soon and see more places.