After visiting Fo Guang Shan I thought there is little left to surprise me in how Buddhism is practiced in Taiwan, but Chung Tai Chan Monastery near Pui in Nan Tou County succeeded in shocking both my mother and I. The little I’ve heard about Chung Tai Chan prior to that didn’t do enough to prepare me for what I saw. It was incredibly out of proportion with anything else I’ve seen related to Buddhism.

How big is it? it’s gigantic. This is what it looks like from a 2-3km away. 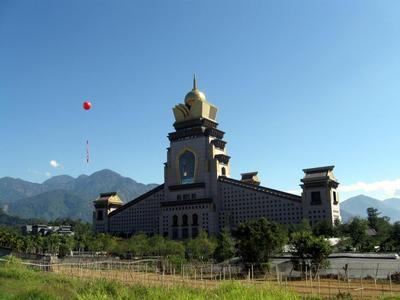 And a closer look… 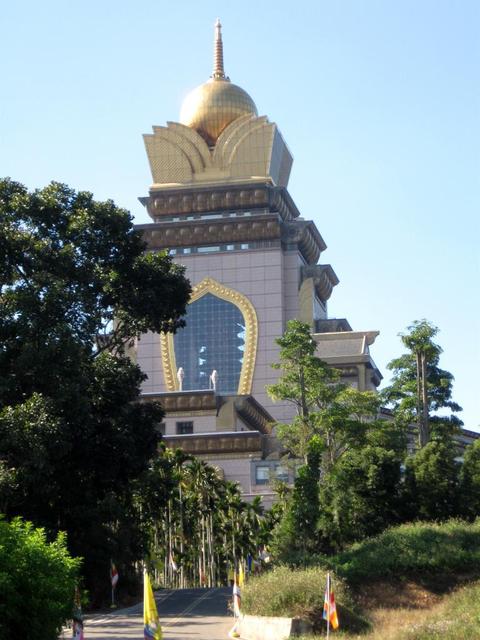 To bring it into scale for you…

Here’s a bit from Wiki to tell the story :

Chung Tai Shan 中台山 is a Taiwan-based Buddhist monastic order founded by the Venerable Master Wei Chueh in 1987. The headquarters monastery itself, Chung Tai Chan Monastery 中台禪寺, completed on September 2001, is one of the largest Buddhist monasteries in Taiwan. Widely admired as an architectural masterpiece because of the mountain monastery’s more modern look, the temple is second only to Fo Guang Shan’s monastery in physical size and in the number of ordained disciples. The temple is situated in Puli in Central Taiwan.

The temple follows traditional Chinese Ch’an, emphasizing on teachings based on sudden enlightenment and gradual cultivation. Chung Tai Chan Monastery now has established more than 90 meditation centers and branches in Taiwan and abroad, including six branches in the United States: three in Northern California–Buddha Gate Monastery in Lafayette, Chung Tai Zen Center in Sunnyvale and Pure Mind Zen Center in San Francisco, one in Southern California, one in the state of Texas and one in the state of Oklahoma.

40 something floors tall, all marble and glorification of Buddha and his, well, friends and bodyguards… 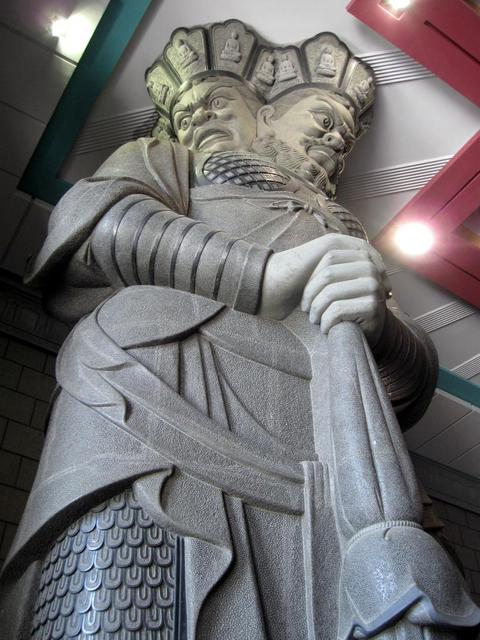 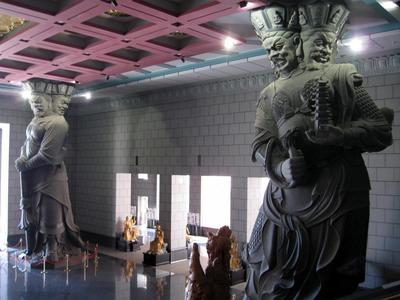 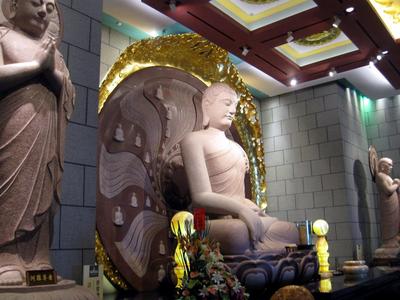 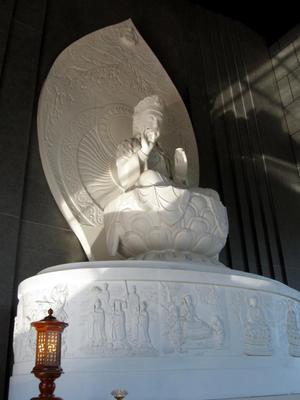 We were extremely lucky as usually tours are limited and booked 2-3 weeks in advance, but Buddha was with us that day as we saw a small group walking around with a German monk showing them around in English and so after asking permission to join we followed them up the building into the unknown (where photos are forbidden). 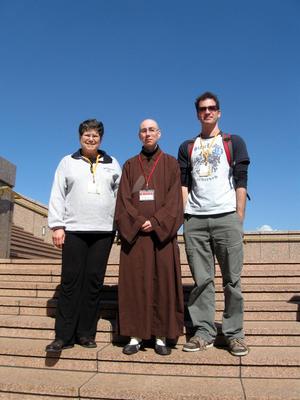 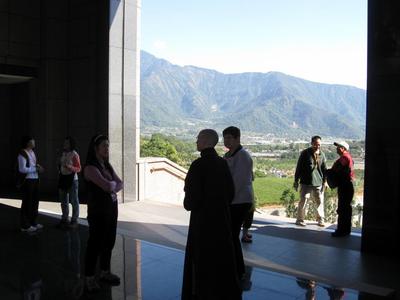 The views from high up are spectacular with Betelnut trees overtaking the landscape. 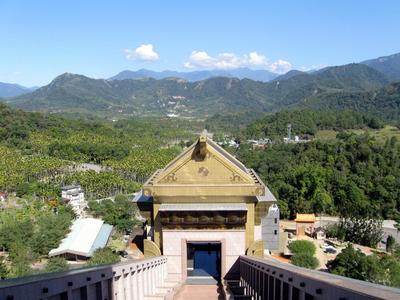 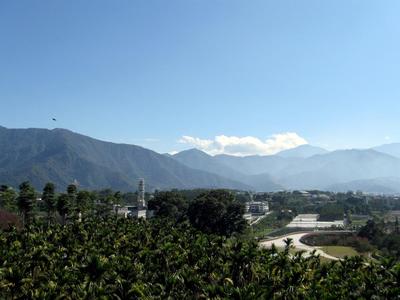 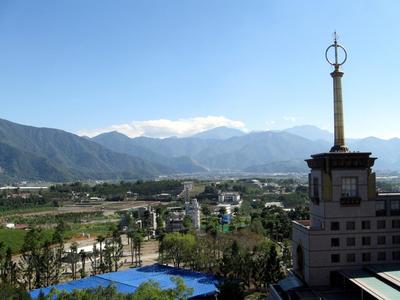 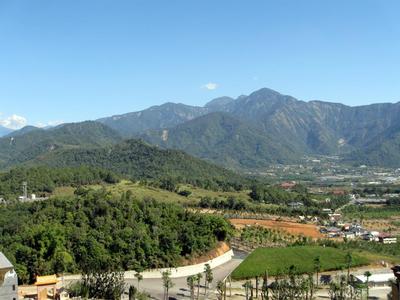 I think we’ve learned alot about their practice of Buddhism and realized how little we know or understand religion on this side of the world. The Taipei Taiwanese in our small tour group, speaking near perfect English, shared some of his thoughts with me – "It’s all very impressive, ofcourse, but being a Buddhist and having been raised on the message of humility I find it very difficult to relate to all this wealth".

Either way, it’s a must visit and a fascinating look at Buddhism in Taiwan. Book well ahead in advance to see the real important things inside. My mother also really enjoyed the fancy veggie restaurant nearby.

I have also heard about the impressive building of 中台禪寺, but as the person in you tour group said, it’s really hard to relate the idea of Buddhist believe to the enormous wealth this Buddhist monasteries, such as 中台禪寺, 法鼓山, & 佛光山 have. And you might not know, but most of these monasteries has a really active political role, such as 中台禪寺 is actively supporting the KMT…

Buddhism got so many sides, it just like dancing in the kingdom of god.

Lucien – Yeah, I’ve heard a little about that side. It’s interesting that most leading Buddhist organizations were started by relatively unknown monks from Mainland China that came here with the KMT and grew into being world known and extremely wealthy.

I totally disagree with what you and Lucien said that these monasteries are so wealthy. If you ever read the verse “Those who see me in form Or seek me through sound Are on a mistake path They do not see the Tathgata” as stated in Diamond Sutra, you should understand the meaning” never judge other just by their appearances” For example, Typhoon Morakot davasted Taiwan and left at least 70 dead and hundred and hundreds were still feared trapped by a torrent of mud and rock that buried their homes.Chungn Tai Chan Monastery donated $600,000 dollars to the charity… Read more »

While visually and sensually very impressive, Chung Tai and many other organized Taiwanese and Chinese Buddhist centers present Buddhism in a way that seduces their flocks, elevates their egos, and eclipses the simplicity, groundedness, and realized wisdom of their first teacher. Buddha would be just as out of place in what is displayed, as Jesus would be by what many Christians adopt as ‘Christian’. Both teachers pointed to a living, imminent and transcendent reality in opposition to the glitz that accompanies not only the periphery but the heart of many organized religions, and most especially Taiwanese Buddhism. There is also… Read more »