After introducing Dubrovnik in Croatia as “best of the Balkans”, touring Dubrovnik’s old city walls and the local Dubrovnik Jewish museum and synagogue, it’s time to wrap up the Dubruvnik tour with a walking tour of the old city. And what a lovely old city it is, full of history and meaning.

Though there were many interesting sites we visited inside, I only remember a few. Samostan Dominikanaca – Dominican Monastery (Museum) is one of them… 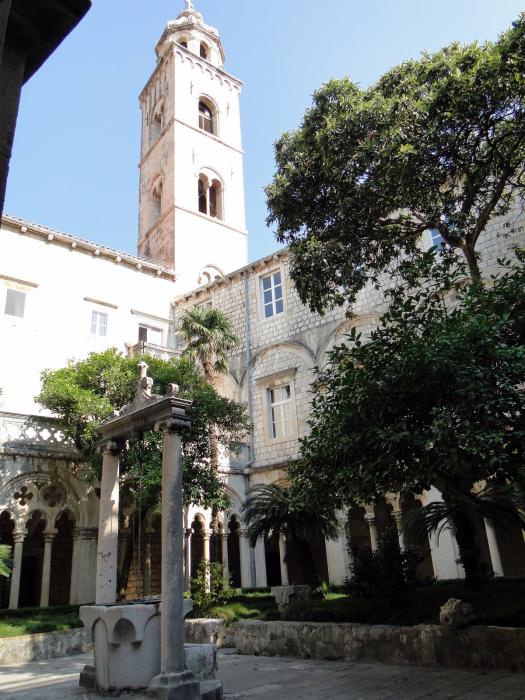 The place that the Dominicans chose for their monastery was strategically one of the most sensitive points in the defense of the city, so that as early as the 14th century the whole complex came was included within city walls, becoming their part. The church is one of the largest Gothic buildings on the east Adriatic coast. It is of simple architectural design: a hall with a pentagonal Gothic apse which is separated from the central area by 3 high openings with Gothic arches. The high outer walls of the church are bare of ornaments. The portal on the southern side has certain Romanesque elements, but in 1419 Bonino of Milan added to it a frame ending in a pointed Gothic arch. The interior is rich in stone church furniture, a pulpit, gravestones and Renaissance niches.

The monastery complex acquired its final shape in the 15th century, when the vestry, the chapter house and the cloister were added. The beautiful porches of the cloister were built between 1456 and 1483. They were built by the local builders: Utišenović, Grubačević, Radmanovićand others from the designs of the Florentine architect Massa di Bartolomeo. The arches of the cloister are closed by beautiful Gothic and Renaissance triforas. In the middle of the courtyard is a richly decorated cistern crown. The vestry was built in 1485 by the famous Dubrovnik architect Paskoje Miličević. The bell-towers was started by the architect Checo of Monopoli in the 16th century, but it was finished only in the 18th century. Although the complex of the Dominican Monastery has in some of its elements different style characteristics, from the Romanesque to the Baroque, it is a harmonious and logical architectural unit, but nevertheless predominantly Gothic and early Renaissance. 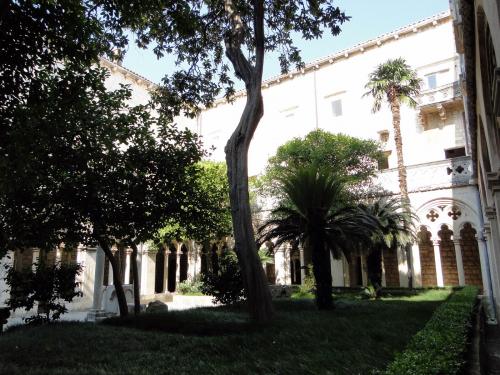 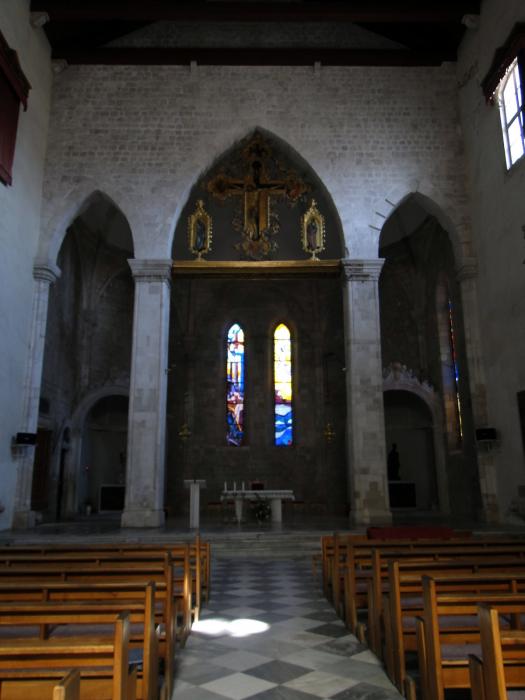 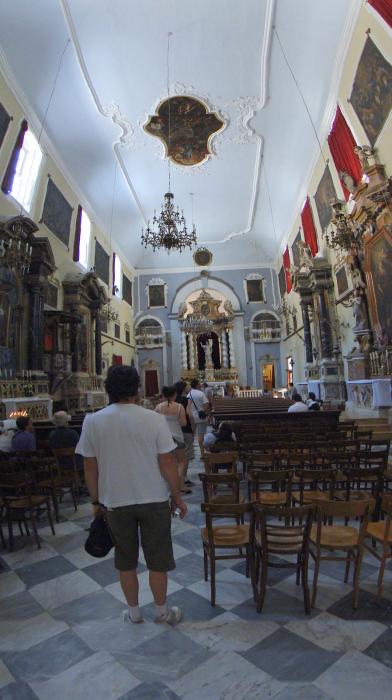 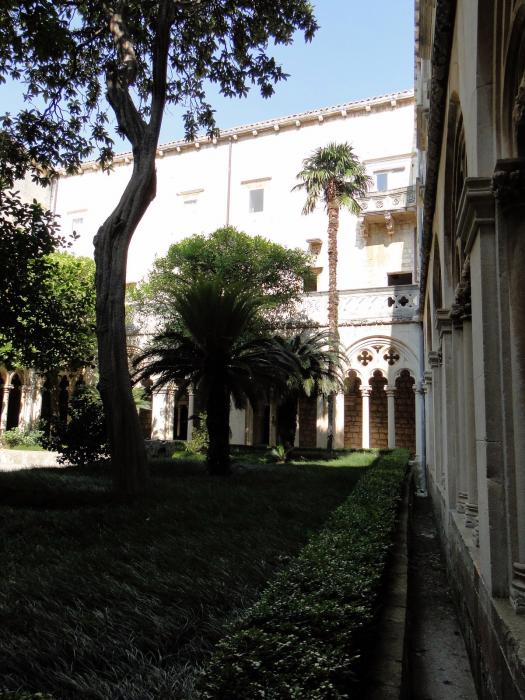 Honestly, I never did get to the bottom of the differences between the Dominicans and the Franciscans. Mental Floss helped with the task :

As for the Franciscans, they’re a mendicant (“begging”) order founded, as you might expect, by St. Francis of Assisi (1181–1226), the patron saint of animals. Francis took Christ’s call to go forth without shoes or staff or money as a literal command, and founded his Ordo Fratrum Minorum (Order of the Friars Minor, or, more literally, “Order of the Little Brothers”) in 1209. Best known for their plain robes (they’re still called the Greyfriars in some places), they traveled the countryside singing and preaching. Overall, the Rule of St. Francis was simple, based on a vow of poverty. But it wasn’t all happy begging and singing. The friars felt the best way to get closer to God was hard work. To this day, some Franciscan friars still wear the traditional hooded woolen robes, rope belts, and sandals. Notable Franciscans include St. Bonaventure, William of Occam (namesake of “Occam’s Razor”), and the fictional Friar Tuck. As for Francis himself, he was believed to have miraculously borne the stigmata (the nail and spear wounds of Christ) late in his life.

St. Dominic de Guzmán founded his order around the same time as St. Francis, and he had one main purpose in mind: preaching (their official name is Ordo Praedicatorum, the Order of Preachers). The Dominicans arose at a time when heresies were rife in parts of Europe, and Dominic wanted to return heretics to the fold. Like the Franciscans, the Dominicans were mendicant friars, and they had their own set of precepts: poverty, chastity, and obedience. Despite their godly mission, or perhaps because of it, the Dominicans were the driving force behind the Inquisition. In fact, St. Thomas Aquinas was a Dominican, as was the terrifying Grand Iquisitor, Torquemada.

And there are quite a few structures in Dubrovnik of the Franciscan order, naturally much more simpler in looks :

The large complex of the Franciscan monastery is situated at the very beginning of Placa, to the left of the Pile Gate. The lateral facade of the monastery church runs along the principal street of Dubrovnik, and the monastery spreads north along the walls as far as the tower Minceta.

The earliest monastery was built in the 13th century in the Pile area. As the city was threatened with war, in the 14th century the friars were forced to move under the protection of the defence walls. The new monastery building was started in 1317 but work went on for a very long time. Some parts were destroyed and rebuilt several times.

The large Franciscan church, one of the richest churches in Dubrovnik at the time, was destroyed in the earthquake of 1667. The only element of the former building which has been preserved is the portal on the south wall. It was probably moved from the front to the lateral wall in the course of the restoration in the 17th century. […]

The church was reconstructed in the Baroque style. The northern wall of the church closes the southern wing of one of the most beautiful cloisters of Dubrovnik. This cloister was built in late Romanesque style by master Mihoje Brajkov of Bar in 1360.

The ambient is most harmonious, framed by a colonnade of double hexaphoras, each with a completely different capital.

The Franciscan cloister is one of the most valuable late Romanesque creations on the Croatian shores of the Adriatic. The Franciscan monastery has another cloister built in the Gothic style, but it is for private use only and not accessible to the public. 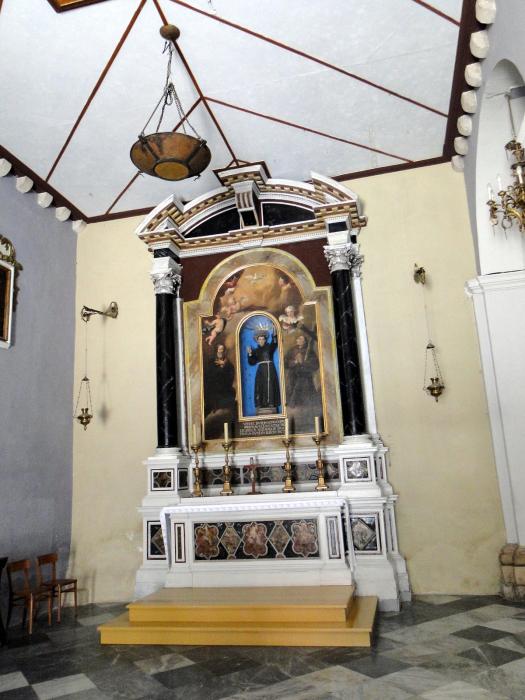 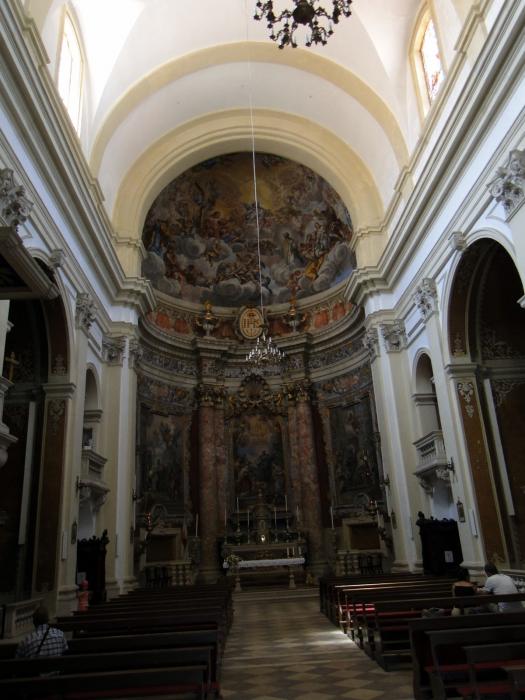 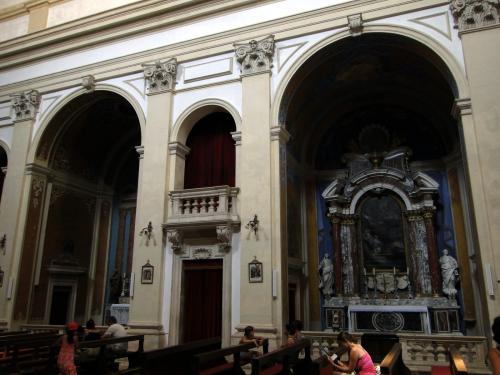 Okay, back outside to the renovated old streets of Dubrovnik… 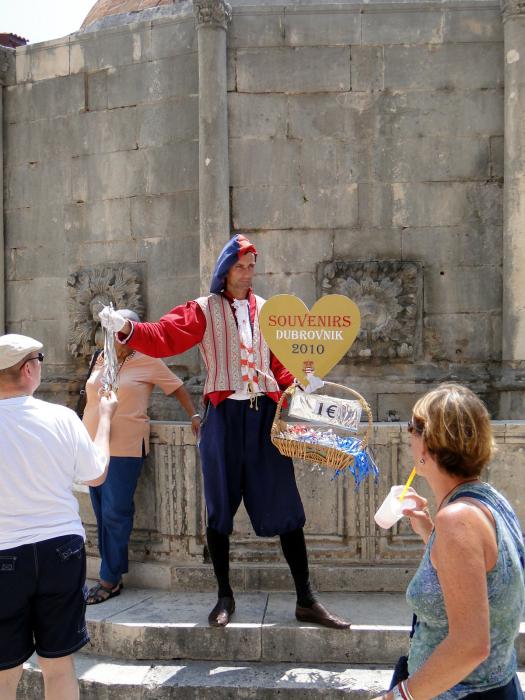 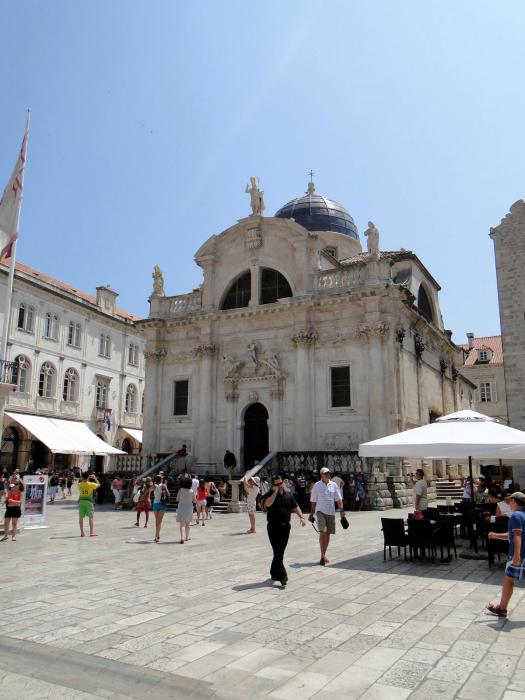 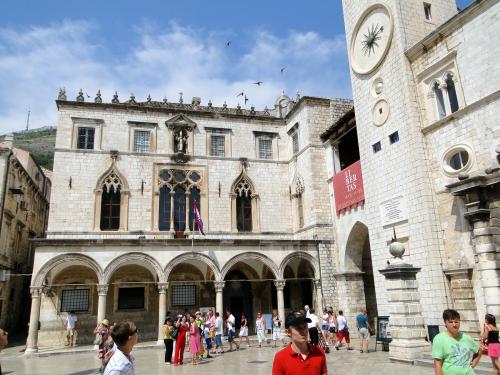 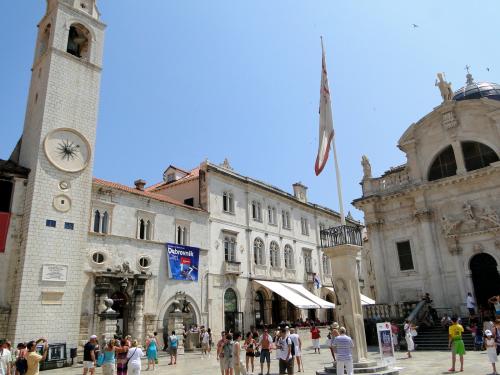 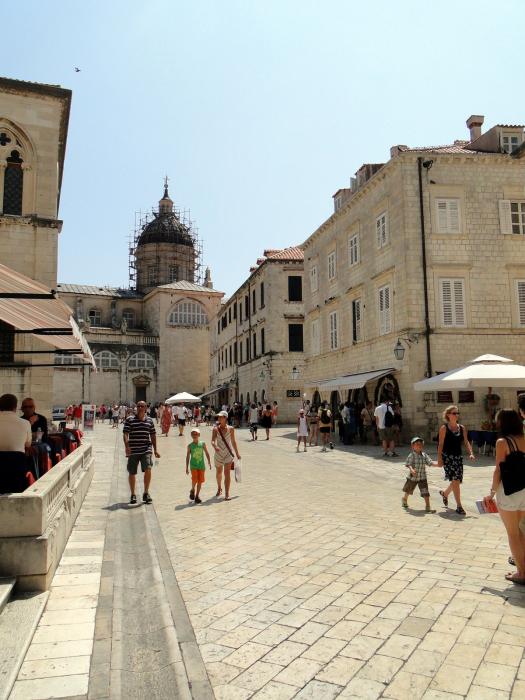 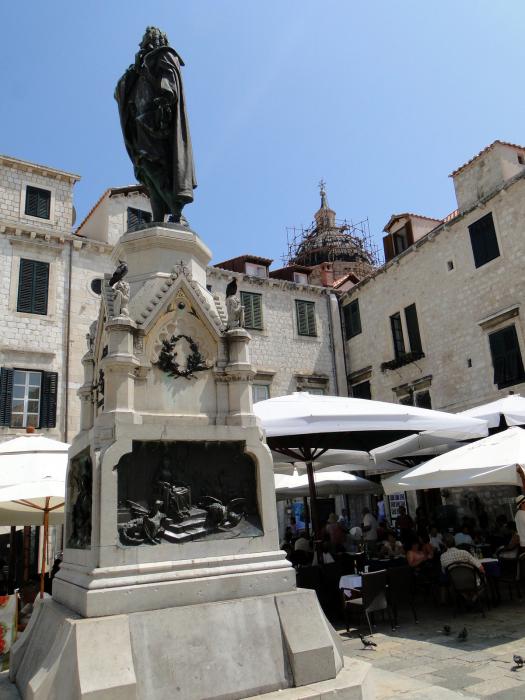 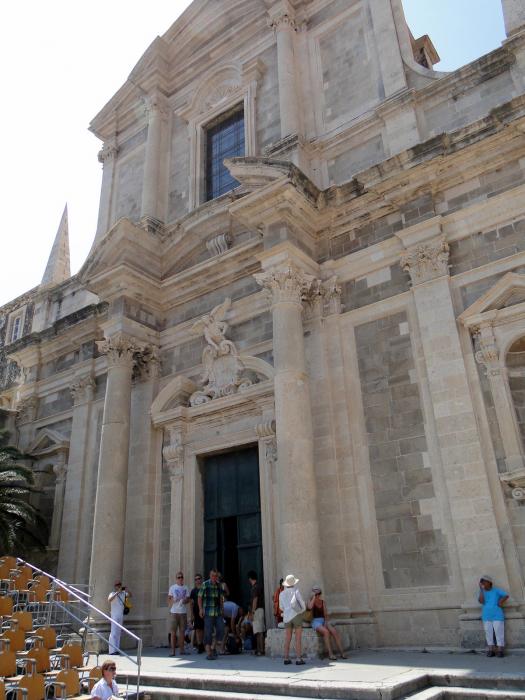 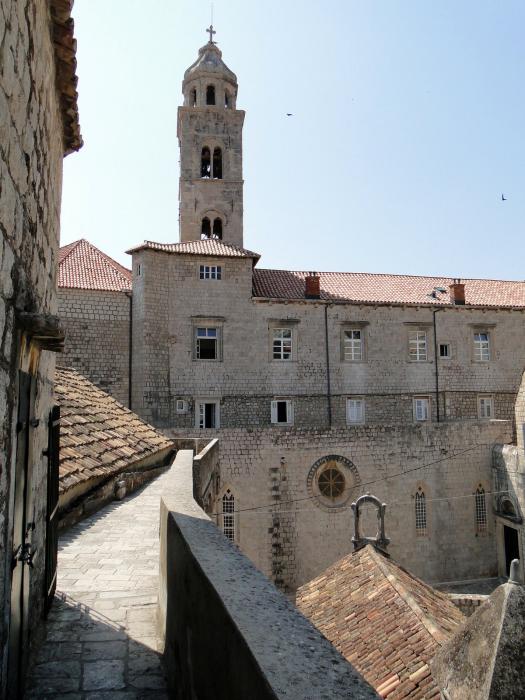 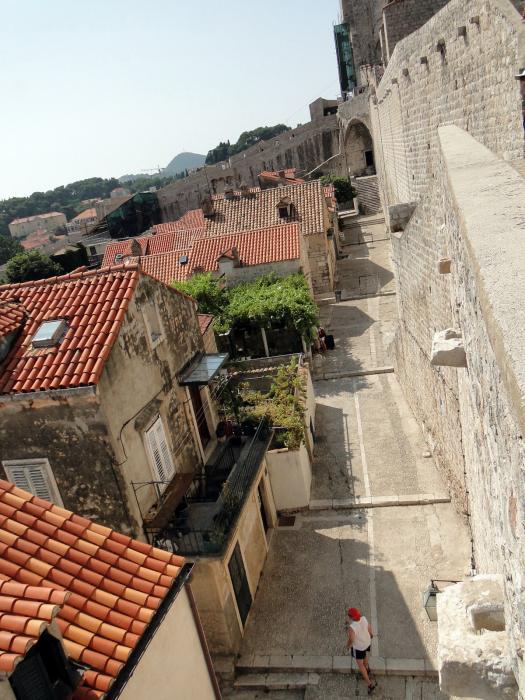 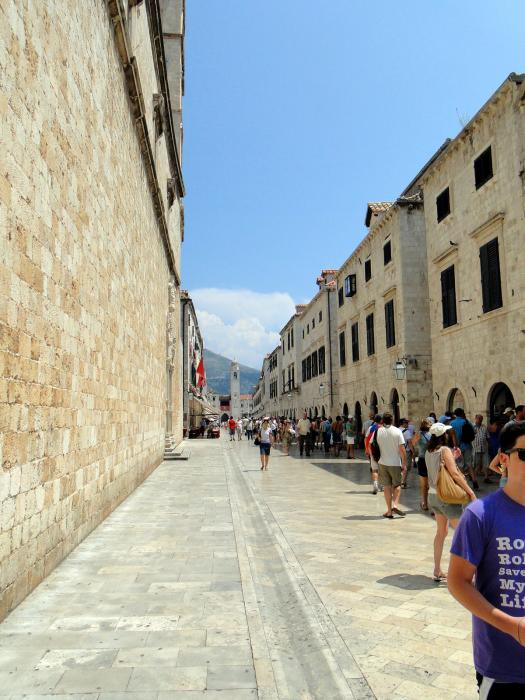 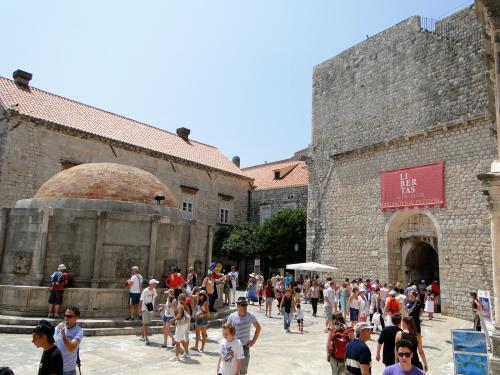 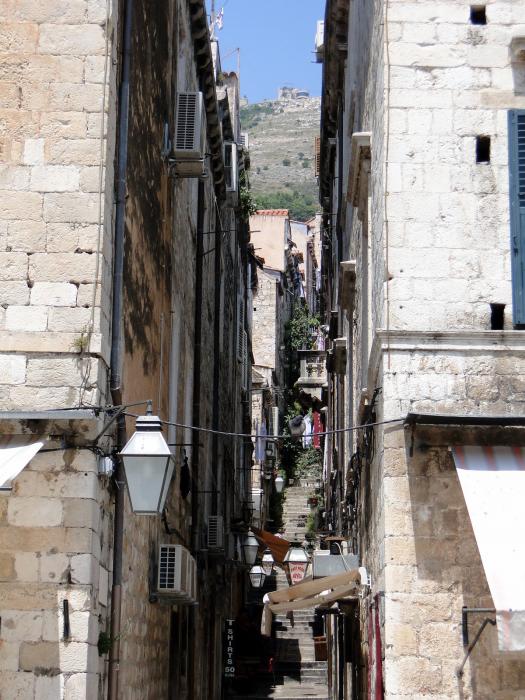 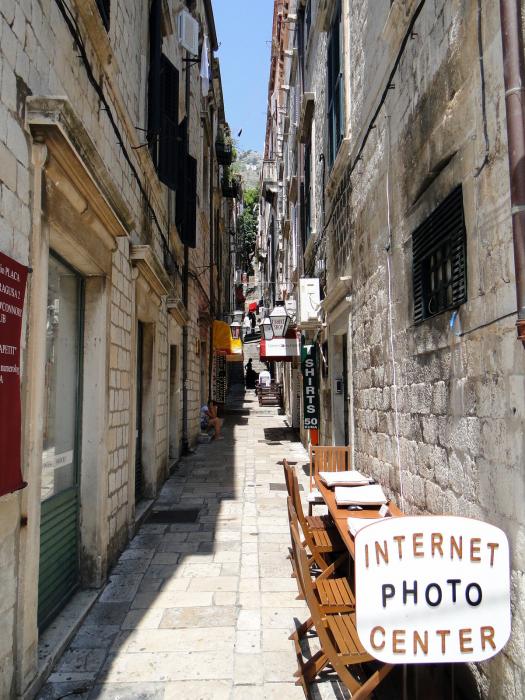 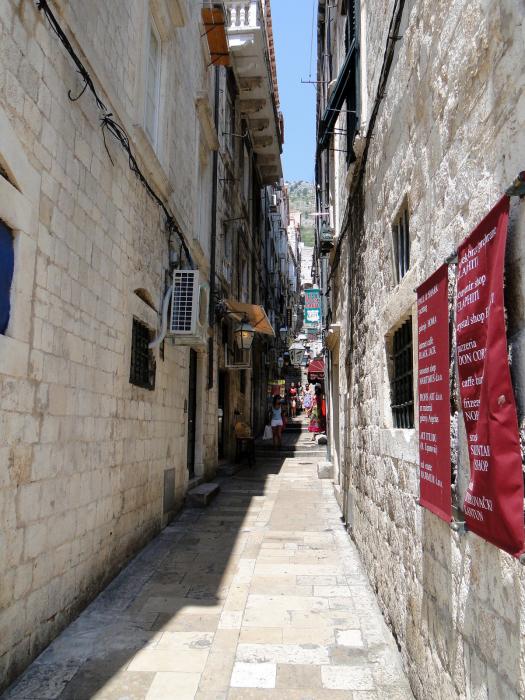 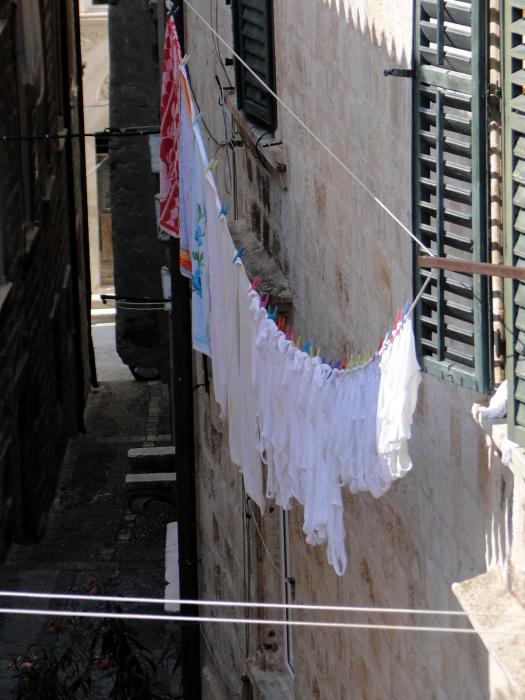 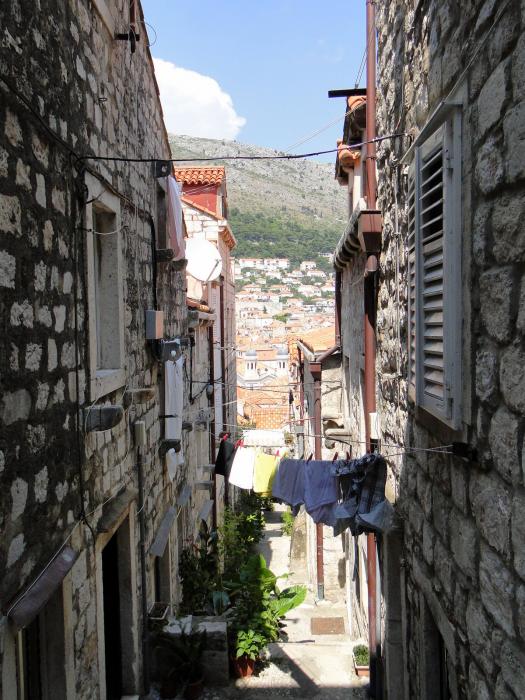 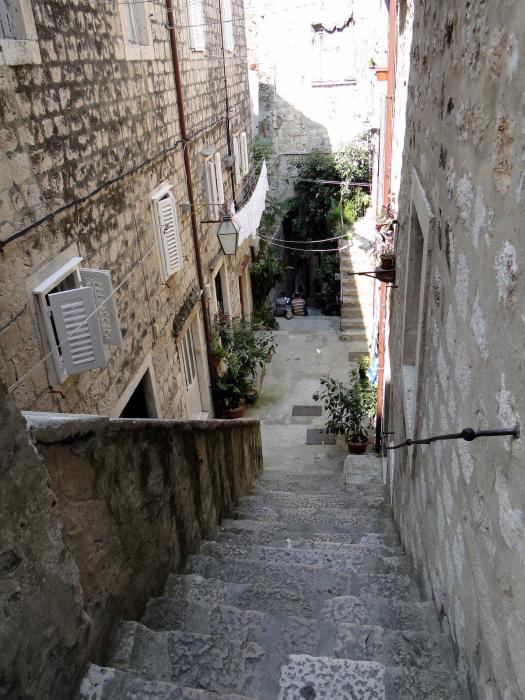 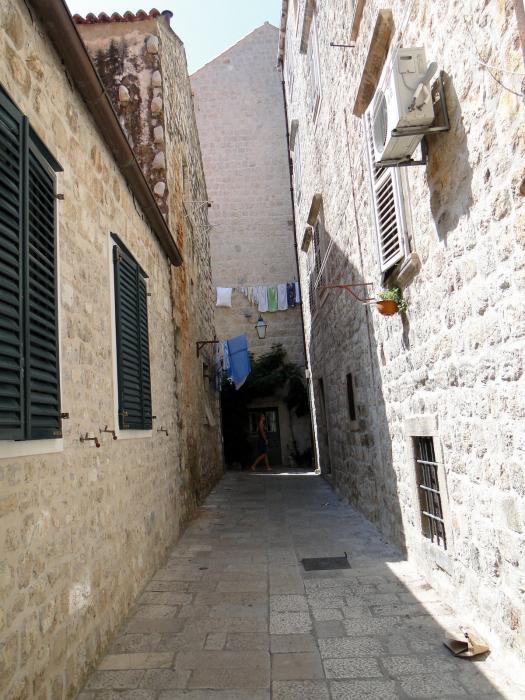 It’s all charming and gorgeous. Quite like the old city of Jerusalem just without the dirt, hassle and religious/political sensitive. Perfect for travel.

Here’s a Google map of the city: