Taiwan has really amazing events going on. This month Taiwan had Spring Scream 2009, Taiwan’s biggest music festival held in southern Kending, but another interesting festival that didn’t get as much attention, atleast from the expat community, is the 2009 Kaohsiung Song-Jiang Jhen Battle Array in Neimen.

Held at Kaohsiung County’s Neimen township were two weeks of non stop action featuring fast speed martial arts, war battles, dancing lions and dragons, and other various Chinese culture dancing and activities. Not many English related information, an English speaking tourist really had to try hard to get information about this one. Still, the Taiwan government does have a few webpages to explain what it’s about :

Surrounded by mountains on four sides, in the early days the ancestors living at Neimen were always robbed by bandits. From the Ching Dynasty on, the people began to establish martial arts studios and learn martial arts in order to defend themselves. In addition, they also practiced many different arrays to repel the robbers. In order to coordinate with Kuan Yin Bodhisattva’s inspection tour around town, people began to blend martial arts into "Sung Chiang Battle Array

Neimen Township is widely known as the biggest "Song Chiang Den" in Taiwan, including Sung Chiang Battle Array, ,Che Ku show, Niu Li dance, 7-Mile Echo, Plum Blossom Passage, Be-Kuan and Nan-Kuan, Dragon Dance and Lion dance, and many different types of martial arts. In the township, there are some 50 arrays. Meanwhile, Sung Chiang Battle Array is based on the story of the Water Margin (Shuihuchuan) therefore it is named after it. Even the weapons used in the performance are imitations of those used by the 108 heroes in Liangshan Swap described in the novel. The "Chungputou Sung Chiang Battle Array" of Neimen, whose "Sung Chiang Battle Array" imitates the costumes of the heroes in Liangshan Swap, is the one responsible for the "opening show" of the ritual. Situated at the center of Neimen Township, Chichu Temple is right at the geographical location of "floating water lily." In front of the temple, the environment is excellent; it is described as the harbor that both dragons and shrimps struggle for it. Before the birthday of Kuanyin in February 19 of the Lunar Calendar, around February 14-19, the Kuan Yin at Chichu Temple will inspect some 40 villages and townships around Neiman, Chishan, and Tienliao on a tour. During that time, the arrays formed by the people will gather around the parade. At the most there are tens of arrays that join in the parade, with more than 100 thousand believers, rendering it a magnificent ceremony. It has the highest number of arrays formed by the people in the ritual in Taiwan.

It was a beautiful day, and the very local crowd was attending in huge numbers. The temple Shun Sian temple seems very well financed with relatively high-standard temple decorations and architecture and a 4 stars hotels just next to it. Set next to an artificial lake and surrounded by mountains (and the Lingding Hiking trails), they couldn’t have picked a better spot. 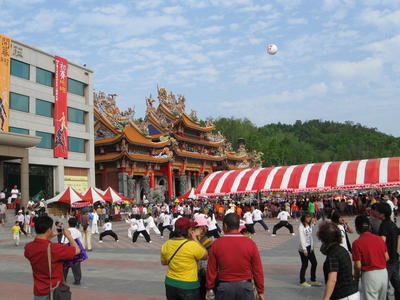 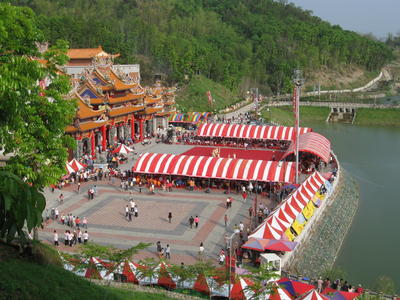 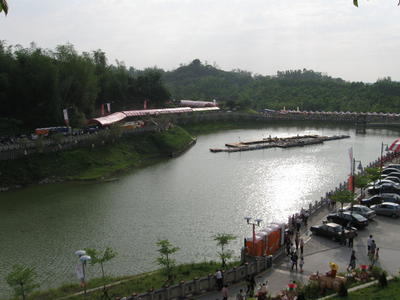 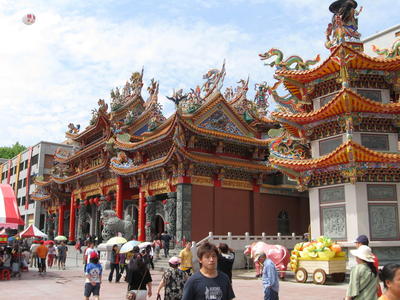 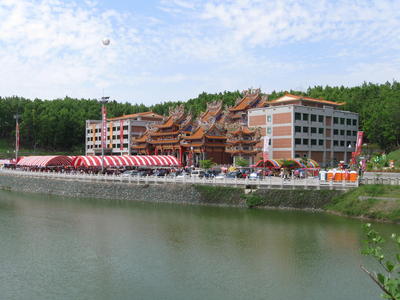 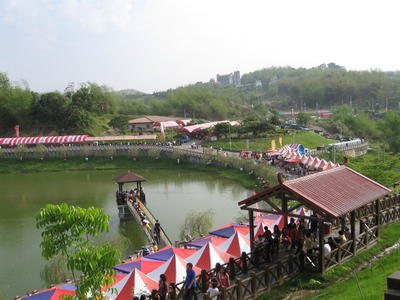 I was just in time to see the local university students, winners of the battle array competition for 2009 and world-known battle performers, giving a truly wonderful performance (low quality, but I think it’s worth watching to get to the spirit of things).

For their more official upclose performance, check this one out :

Imagine two weeks of performances just like that. I love this kind of stuff.